Good luck with that.

Even for a Stinoski winner, 48 grand is a mighty steep climb.

I know that T . ,Mark Cameron restored it. I knew of the chassis 50 years ago and even bout the Ruxeall rear end from it and left a correct rear end. when Mark bought the chassis, the rear end I left was still sitting by it. It was in a shed at Countrysideauto yard in Eden Praire MN. A very well restored T. Mark runs the November swap meet at his home.

You can always make an offer.

Just for the record, the name is Stynoski.

That is what i thought but it should never be me that corrects any spelling.Bud.

1998 was 20 years ago. has the car been stored in an oxygen free environment or merely a humidity controlled area? probably a great car but it is not one that I would feel comfortable pulling out of my garage being better than new is not my cup of tea, I like to drive them!

Just a remark about the spelling of Stynoski,
it is spelled wrong on the plaque this is with the car! 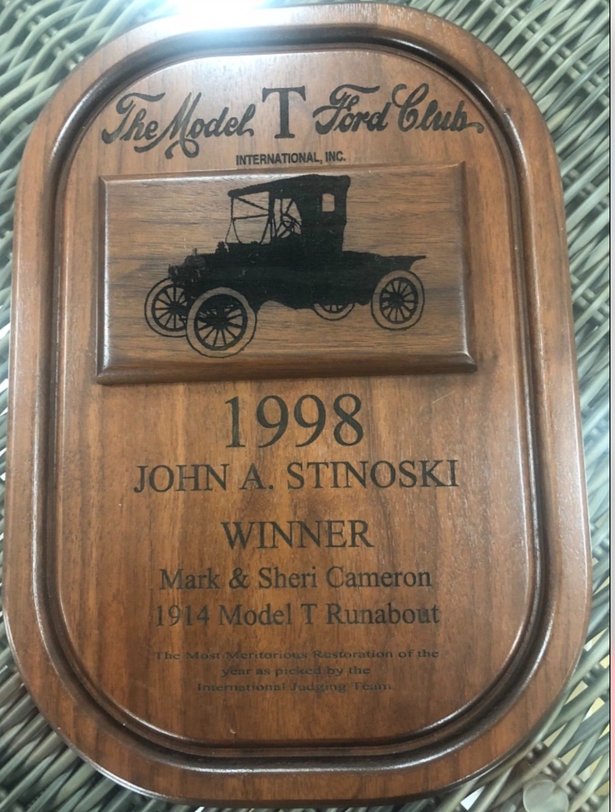 That Misspelling should add a few thousand dollars to the price?

You should call John Stynoski and ask him if he changed the spelling. He might not answer very quickly.

Just because the car is a Stinoski car, doesn't mean everything is exactly correct! After all, the judges are only human!

I would research that a little further. That plaque is not like any that we at the MTFCI have given out.
Gordon Koll
Awards Chmn
MTFCI
Not saying the car is not genuine - but the plaque may not be.

The plaque may not be real, but the names are right (except for spelling).

I find the comment from GA Chesire insulting. I drive all my cars and this one was no different. Why would a Stynoski winner need some sort of disclaimer about its road-worthiness! It does not. I like to drive them, and I like to do decent work on them before I put them on the ground. Most of the Stynoski winners I know of get driven so please don't assume otherwise without bothering to ask. The award plaque was sent on with the car because it was mis-spelled by the awards chair at the time. A second (and correct) one was issued to us some time afterward and hangs on my wall to this day. I sold this car to build my shop. Wish I had it back. It runs perfectly. I doubt the asking price is realistic in todays market.

If Mark Cameron restored this car, then whoever buys it will have a great Model T. It will be both period correct and run like a top. Regardless of what many of you may think, a Stynoski winning car is going to be one of the most correct restored car out there and it would have been judged by a team of the most experienced judges. It might seem like a lot of money, but you can't hardly restore a car to this quality for that money.
BTW Larry, we're still waiting to see your Stynoski winner.

It's a very nice car and it won in Cedar, Michigan. The gentleman that bought it stopped by my dad's house back in 1999 or so. I have seen it drive. In terms of Stynoski Winners driving I have restored 4 and all drive just as good as they look. In fact Eric McLeod's drove the entire tour as did Gordon Koll's the year they won. So the old saying is probably true, "Don't judge a book by its cover".

I remember Eric Macleod's car (1926 or 27 Touring) winning at Clear Lake in 2006, since I was on that tour. The judging was on Tuesday, and one other car was entered in the Stynoski competition, a 1910 Town Car. Wednesday it rained cats and dogs, and Eric drove his car that day and the rest of the week. I was very impressed.

I remember the car and the Cameron's from parking next to them at a O.C.F. long ago. The car looked new as if it had just left Ford,and i think that is what the Stynoski Award is about!Remember if no car/truck is up to the standards set the award is not given that year!Bud.

Mark I did not mean to be insulting, I was merely trying to say I would be too afraid of scratching it to even move it to sweep out the dust under it. My bad please accept my sincere apologies.

Update on the misspelled plaques : There were a few plaques produced and handed out in the mid to late '90s which are as shown. It's unfortunate that the error was not caught at the time but has since been corrected by subsequent Awards Chmn. Bottom line - both the car and the plaque are genuine. I can also vouch for Mark Cameron's workmanship and diligence in researching the restoration. The car may not be perfect but adheres to the information available at the time. I would not be afraid to drive it on any tour.

I know of a 1924 Touring car that was restored about 10 years ago by a professional auto restoration shop in Western Wisconsin. The car looked nice and drove okay, but wasn’t anything special, and certainly would not even qualify for Stynoski judging. The owner paid over $40k to have it restored. (NOT counting what he bought the car for or already had into it!)

If you look into any particular “professional restorer” doing a complete T; properly restoring all the mechanicals, body, glass, wheels, tires, paint, upholstery, top, etc you are generally looking at a restoration price tag around $40k just for a black era T. Far more money than the average T hobbyist will pay for one already in good shape but there are lots of people out there that want different things for different reasons and see costs versus value much differently.

I think the ‘14 in question, if it has been well kept since it’s restoration, is probably priced at far less than the cost of a good restorable ‘14 roadster and professional restoration.

Hey Adam it's a buy it now price. Snap it up and flip it.

I too have to chime in. I really appreciate the kind comments about my '26 Touring. Many of you may not know that I also wound up with the '15 Touring that won Stynoski in 1992 for a short while. Both of my cars were very competitive 10 years post restoration. You certainly have to work at it but it can be done. In fact I plan to take the '26 to the AACA Grand National in Auburn this spring. I have a heck of a cleanup ahead of me but I really think it can be done.

When you think about it, you would be crazy not to do a phenomenal mechanical restoration while preparing a car for Stynoski. Per judging rules the car must be driven onto the show field. While a car that decides to be cantankerous does not automatically disqualify it, the judges seem to give a dim view of such things.
I really don't think my '26 won in Iowa because I drove it but it didn't hurt.

The reason I think it won was the overall restoration was well researched and documented and the car was restored to as new condition in every was including the mechanical components. The late Sandy McTavish built a fabulous engine for me, Mark Eyre completed what was likely his best paint job at that time (and he just keeps getting better), Gord Koll replaced the hidden woodwork (it was a shame to cover it), and I hired Mark Larder to trim the car and it came back looking like a work of art. Next I had it judged in AACA, then tore off every sub par component and re-restored those parts of the car all over again.

My final point is while the asking price of the car in question sounds like a "good luck" price, I would challenge anyone out there to buy a car worthy of such a restoration, complete the restoration using only the best of T experts in the country, i.e. Mark Cameron, Mark Eyre, Gord Koll or, for that matter doing the work yourself but keeping track of your time at $30 (if it's a gift) per hour X 2500-3000 hours, and still have change left over from $48,000. To me, if you really want a Stynoski winner that still looks the part, the car is a bargain.

Eric, I look forward to seeing your T at the Grand National in Auburn.
Terry