Of course, none of us are old enough to have bought our Model T new. But reading the work of Murray Fahnestock, contributor to the Ford Owner, and the Ford section in Dykes, as well as "The Model T FordOwner" (sections republished by Dan Post).

Fahnestock lived in Pittsburgh, Pa. in 1914. Pittsburgh at that time has a Ford Branch Factory.

In Fahnestock's text he stated that his first encounter with the Model t was in 1914, after years of such cars as Peugeot, Pittsburgh Six, Mobile steamer, and a Reading-Standard, Harley-Davidson, and Thor he bough a Model T new.

I would say he bought motor number 554,792 later than he recalled. Another lesser possibility is that is the car number off the data plate.

However, if he really got motor number 554,792.....
The 1913 & 1914 motor number assembly dates are derived from "units built" records because the books are lost. However, they dovetail right into the 1915 motor number records that do exist. Bruce's Book page 501.

The motor number assembly dates in Bruce's Book seem to be rather accurate because the transmission stub shaft dates consistently precede those dates by about 5-6 days or more . Usually 5-6 days, or more, before those dates but NOT later. 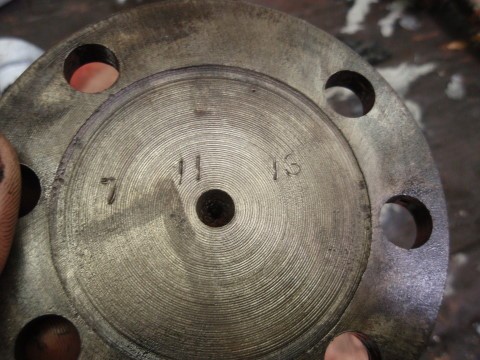 7-11-13 was stamped by hand when the transmission was completed. The engine number was stamped six days later on 7-17-13 when it was completed according to Bruce's Book. Pretty close, but not later.