I keep having a problem with my air tools freezing up when I'm working outside in temps below 40f. I had the problem last winter so over the summer I installed a better dryer on my compressor but they still ice up.

I've resorted to using two of the same type and setups and using a space heater to heat/thaw one while using the other. Surely someone has solved this problem. I will say the air compressor is in the shop with an ambient temp above 50f. 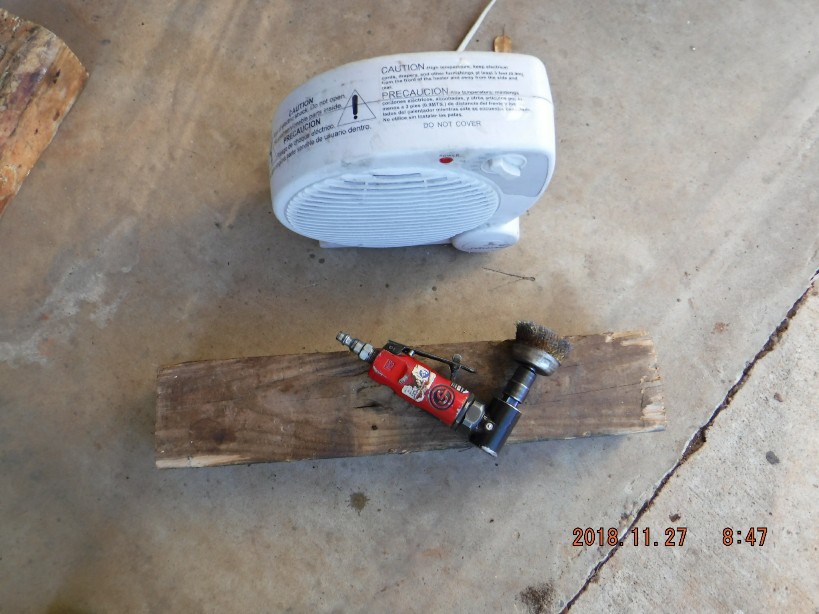 Do you have an Air Dryer or a water separator? Air dryers will solve the problem but are very expensive if you need one for use with a high capacity compressor. I have had some success with using multiple separators with coiled copper tubing in between them,but that doesn't work well if your temperature is below freezing.

This is probably a dumb question, but do you blow down the main air receiver before you use the air tools?

Are you using a desiccant or cyclone type air dryer?

I leave the drain cracked open on my cyclone type when a large volume of air is being used. This would allow continuous removal of moisture.

Maybe place those small in line water traps close to your tools. Perhaps water is condensing in the hose going from 50 to lower temp??
Or do what I do. Live in Florida.

The company that sold my professional, 80 gallon, two stage compressor 10 years ago said there should be a minimum of 20’ of metal line, then a filter-dryer, then a coalescer-dryer, then a regulator. I’ve got about a 15’ run from that to my air hose which has a filter/water trap before the hose reel. That trap has never been damp, air tools don’t freeze, no water or oil in the line ever.

Good filter/dryers are going to be over $100 each.

I only have the filter / dryer. I had an oiler but thought that was causing the freeze up so I took it out this week but had the same problem. I do drain the tank after each use but it's usually 1/4 cup or less each time. It's a 65 gallon vertical tank 2 cylinder compressor. I will say it's very humid here in North GA.

James. If your filter/dryer is mounted on the tank you should move it. The further away from the compressor the better and more so it the air tool is using as much or close to the amount of air available. A coil of 25' or more of air hose between the compressor and the dryer will make a difference.

Some high volume tools tend to do that, no matter what you do.
I have an air buffer, the exhaust on it will freeze and plug up when it's 70 degrees outside...

We used air nailers in Alaska at -40 degrees. We put alcohol in the tanks of the air compressors, and lubricated the air tools with straight antifreeze. It can be done...

I grew up in MN, 55 yrs. We have always worked outside with air tools, and I now live in the mountains of east TN, 10 yrs. I have never had a air tool freeze up on me. I use them all often, all year round. I have no dryer on. Only on when I'm painting. I have two hoses running right from the regulator at the tank, one hanging by each door. I drain both tanks(dual tanks next to each other)often by hand.

Use black pipe not plastic or copper. The longer the run the better as this helps condense the air. Install a water filter etc. down stream of the line so the condensed water can be removed. Compressed air as it leaves the compressor will contain moisture until cooled.

I had a small bottle of lock de-icer once and never use the stuff but one day had the same problem with cold air tools so I put some in the tool where the hose goes on and it worked for a while. The stuff is not much more than rubbing alcohol so a few drops should work short term. You will want to oil the tool after you do this. Worked for me.

Funny story: I used to work for a major electric utility. We used contractors when performing extensive maintenance work. Rumor has it that we once had a contractor connect an air hose and cup grinder to a generator hydrogen supply line. After the first spark, that grinder never froze up! HA!

A little Anti Freeze in the line now and then should help as long as it don't hurt your work where the air comes out. I think back in the day when I worked on water towers in the winter, we had a small tank with glycol in it that sucked a mist into the air line....Some of our air hoses went 100 feet up to our work area.

When was the last time you added oil to the tool?

One sure fire method I found, put tools in tool box and go back inside by the fire !!

Or buy a electric grinder from HF, then you will only have the power cord to contend with not that stiff air hose. But I like the go inside and sit by the fire best!

Do you have a refrigerated Dryer in your system ?

No refrigerated dryer. I appreciate the tips. Today it's 30 outside so I'm thinking it's a good day to do something other than clean parts. I will put the oiler back in and try missing some de-icer with it see if that helps.

I work outside year round building houses. We use an air line antifreeze purchased at the lumber yard. Put a little in lead hose. Dont use that hose for painting as it spits moisture.

To elaborate on what Daren said, it is my understanding that filters will not remove water vapor, only liquid water. In other words, the water vapor needs to be condensed into liquid before it gets to the filter in order for the filter to work properly. A coil of copper tubing or a zig-zag rack of iron pipe can make a condenser, or if you have room, just a log run of iron pipe, but slope it toward a Tee so the air coming in will impinge on the back side of the Tee. Take the air off the top side of the Tee and put a drain on the bottom side.

Alcohol injection has been used on semi trucks with air brakes for years. Air dryer components should be available at a truck dealer or aftermarket supplier. If you have ever watched ice road truckers you can understand how well these systems work.