Recently I've seen a TV commercial a few times that shows a persons hand on the ignition key of a car. The hand turns the key and you hear the engine turning over strongly but not start, then a voice says, "Need a new battery?" I dunno why it didn't start, but the battery sounded just fine. Hahahaha.

When that happens to me it's usually the points. Damp or corroded.

I watched a commercial the other day where a man was starting his car and it would barely turn over then the battery died. The guy said "I should have used Presstone". I'm still trying to figure out how antifreeze has anything to do with the cars battery or charging system!

Randy, I've had the same thought. I think they have run that same commercial for years. Dave

Randy,
I've seen that one too. It makes as much sense as the battery commercial, which is none.

You know guys these commercial are aimed at the younger, smarter, up to date generation with smart phones. The majority doesn’t know the difference between a spark plug and a dipstick. You could sell them type antifreeze for an air cooled engine!

Anyone remember the Volkswagen commercial with the car being buried in the snow for months? After shoveling it out, it started with no problem, then the commercial boasts about superior German engineering.

I think I'd give credit to the battery manufacturer instead...........

In the early 70's i was called in to push snow at the chevy plant.After clearing big shot parking and reciveing i parked my bug in the plant mgr's parking spot.After all,how does the road grader man get to the road grader.That did not last long!!!!! My favorite though was the Model A parked in the garage with a new bug out front! Forty years later he got the bug! Bud.

Tim in Thunder Bay, I would love to get a case of that stuff. Would look great in my garage. HA!

Sounds like when someone asks me why I have to push the starter button after I turn the key on the Model T. So I show them how to do it and I get a "free start". Or someone asks me to show them how to crank start and I get a "free start". Or if I don't get the free start, it will not start with the crank! Either choked too much or not enough?
Anyway, most people today don't know anything about their car. Even me. I have a Buick with front wheel drive and I don't even know where three of the spark plugs are! I never work on the modern cars.

Cheech & Chong sound of car engine turning over "hey man what's wrong with it? I dunno but I put a Dollar's worth of gas in it yesterday so it must be the battery!

I love this forum. In my initial post on this thread I said, "..., but the battery sounded just fine." I just received a PM from a forum reader as follows, "I never heard a sound from a battery...what does it sound like?"

This is the sort of thing that, when I do it, drives my wife nuts. So, corrected copy, "..., but the starter sounded strong indicating the battery was just fine."

There is this from UPS:

After every flight, UPS pilots fill out a form, called a "gripe sheet" which tells mechanics about problems with the aircraft. The mechanics correct the problems, document their repairs on the form, then pilots review the gripe sheets before the next flight.
Never let it be said that ground crews lack a sense of humor. Here are actual maintenance complaints submitted by UPS pilots ("P") and solutions recorded ("S") by maintenance engineers:

Kevin You just reminded me, while I was stationed in Fairbanks Ak. We still had a few Recip. powered aircraft I had this write up come across my desk.
Pilot: Right engine missing
Maintenance: Found under right engine cowling.

Henry Lee......Younger folks will soon not need to know what a “dip stick” was used for. My two newest Mercedes do not have a oil or transmission dip stick. The computer tells you on the screen the fluid levels. I personally do not like this along with no spare tire!

I drove this 47 International in high school. If you hit the foot starter and the motor didn’t want to turn fast enough, you could start it with the hand crank. I don’t think you could do it if the battery was completely dead but it came in handy lots of times. My T would fit perfectly on the back if I could figure out how to get it up there, plus the truck needs a crankshaft. 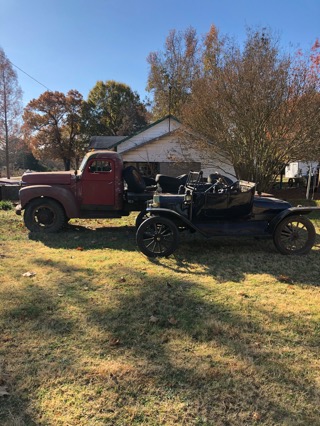 Michael P. - I fully agree with you and would also add that I much prefer good quality temperature and oil pressure gauges rather than the so-called, "idiot lights"!

In most new cars now the computer sends a signal to the gauge, but the gauge is not directly reading anything. Manufacturers have figured out that modern drivers do not look at gauges and do not open the hood. Gauges are still there for aesthetics and for those of us that are comforted to see what is going on, but what we are seeing may not be "real world." Your oil pressure gauge shows a calculation provided by the computer, but not necessarily actual pressure, same with temperature.

Ford now uses a cylinder head temperature sensor in their aluminum heads, not a coolant temperature sensor. The computer calculates a coolant temperature to display on the gauge. The computer also monitors coolant level in the reservoir and if it senses a low level it will turn on a low level light, send the temp gauge to full hot, turn on another high temp light, and if you continue to drive very much farther it will go into a limp mode and begin cancelling cylinders and pumping only air to cool the engine. It will do this even if the engine is not actually overheating and only the coolant level is low. All of this is done to get the drivers attention and scare them into not driving the car any farther.

This came about in part due to engine fires. Drivers were not opening their hoods, coolant levels were low, and engines were getting hot causing a warping in an area where there was an oil passage that then leaked onto the exhaust manifold and in some cases started fires. If you look at a coolant reservoir on a new Ford you will see that the distance between minimum and maximum levels is now very small, maybe 1/2 inch, and if coolant is below the minimum line all of the above will happen.