Another Triton 5.4 falling apart...
I won't begin to explain all the issues with these engines.
Keep your oil clean, if you have one !!
This one appears to have head gaskets at one time and one cam phaser sprocket, but not the other.
Left bank timing chain guide was broken and chain was sawing through the oil pump.
I was able to "cheat" the oil pump pickup tube bolts, without dropping the pan ! And replaced the pump.
I normally pass on these, and recommend a reman engine.
But, helping out a friend and I had most of the parts from another one that the customer balked on...
I got the chains on and timed.
I'll try to put some more pics on, if anyone wants.
I also don't normally pull the intake, but it has a bad manifold tuning valve and it's in the back...PIA !!
I've been putting this off for too long, it's hard to tie up the lift for 3-4 days, when the work keeps coming. 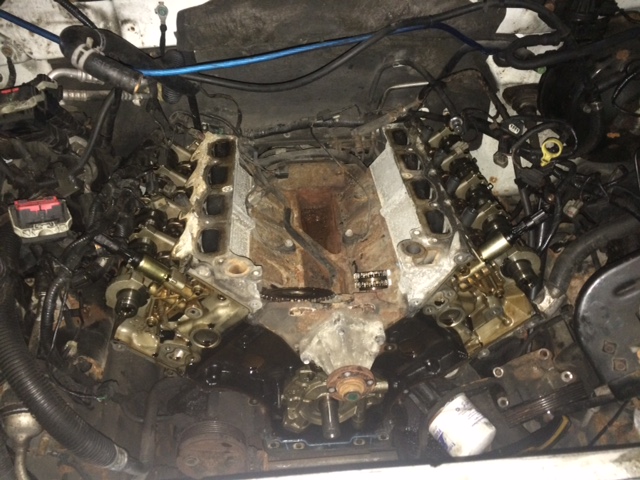 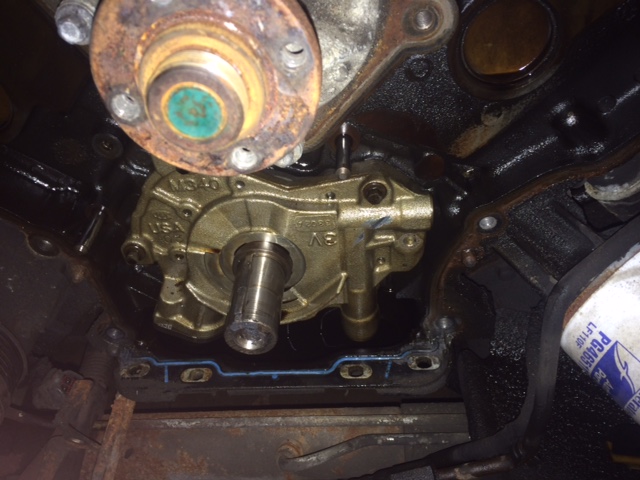 Dave, How many miles were on this engine? No doubt from your description it has problems. Also sounds like it was neglected and not maintained. Just a friendly observation. I could go on about two of my Chevy Suburbans bought new and routinely serviced AND had major engine problems from either design, poor manufacturing/assembly, etc. I was told to not use a GM oil filter.....that would stop the engine from knocking on startup. Got rid of them.

We got rid of our 5.4 before it had a chance to give out. The Cam Phaser setup in these engines were about junk along with the earlier Sparkplugs. It was louder than our 6.0 Diesel in our F250. I'm not certain what Ford was thinking. You're a better man than me Charlie Brown

Matt, the new plug setup is NOT better. Instead of blowing out, now they break off in the head when you try to get them out !

Philip, I would just recommend synthetic, 5K is ok.

I kinda miss my 2002 F150 with 5.4 I bought it at 200k and a dead tranny to use as a work truck for 2 years. Installed new tranny, spark plugs and coils and sold it at 225k miles two years later as planned.
Repair shops see the problems, but they don't see the vehicles that don't have problems.
Philip the V10 has a very good reputation for reliability and long life.

Matthew, I would watch out for that 6.0 diesel also. The 6.2 is good, I've had costumers say that the dealers won't even take there 6.0 in trade.

Dave, have you been into a 1.5 Ecoboost yet? I was not delighted with the engineering choices. It seems like Big Three toss out the entire rule book every ten years.

This is one of the 5W20 oil engines, lots of tiny passages that you don't want sludged up.

Covers on, ready to install intake manifold, here's the conglomeration and the tuning valve.
Should have it running tomorrow. 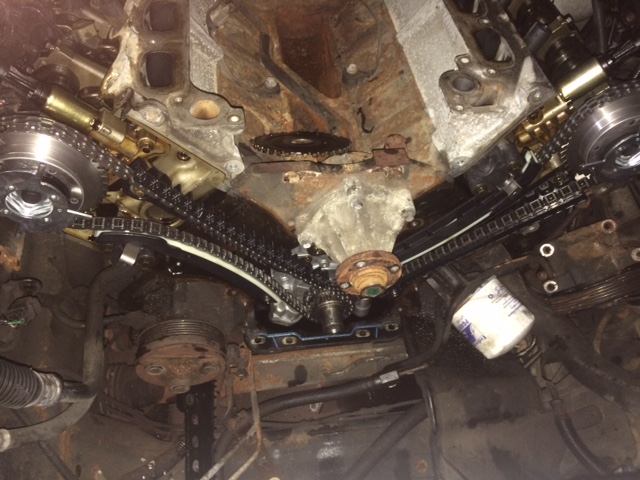 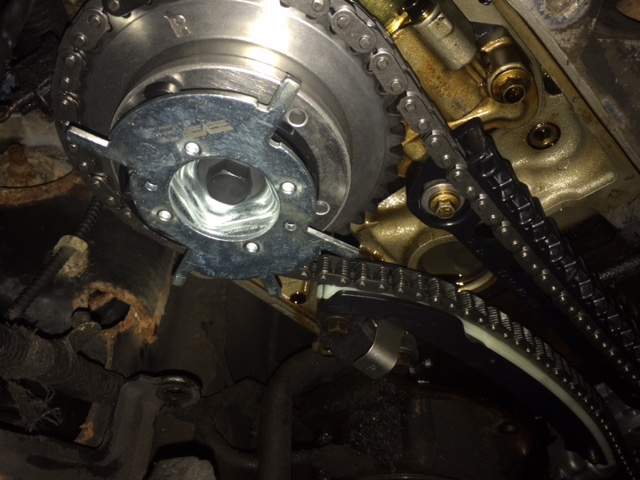 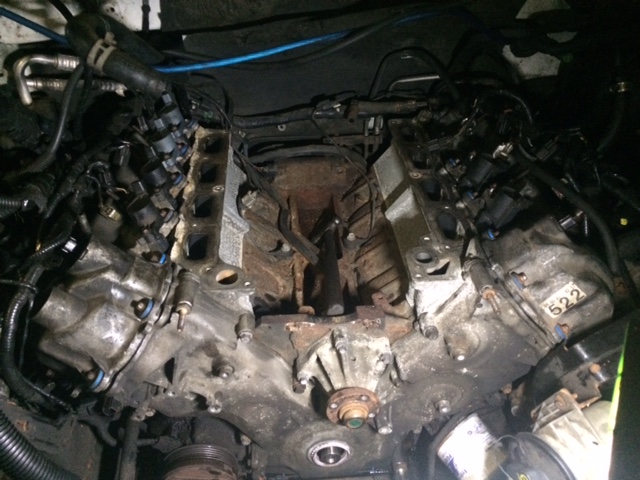 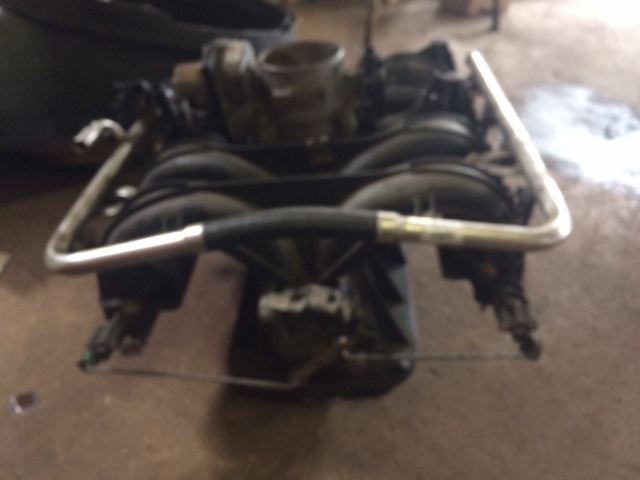 Oh my looks like a airplane engine, but no thanks
Imagine flying with that timing bike chain. My better idea is my only wheels with my 46 59AB Super Deluxe more power than a politician, excellent gas mileage, rides like a Lincoln and I can actually
see 8 spark plugs. And yes even at my age, same as
the car I still like to smoke them rice burners,
these have mean second gears. Remembering my youngest son I say lets go at it big shot. Him 1997
F350 with a 460 I smoked him by the first telephone
pole he looked like a model toy in the mirror...

I will say my Uncle's 2002 F250 with the 5.4 has been a great motor, of course it doesn't have the funky cam phasers and the spark plugs are relatively easy to change. Only have had problems with it blowing a couple of plugs out.

As for my 6.0, It's a great truck and makes great power. It's had the head studs installed, EGR and Cat Delete done to it, bigger turbo, etc. It's going on 260K miles and I expect the body to give out before the drive train due to the rust issues here in WV. - Matt

I had it running last evening, just have to install the "Shaker" air cleaner. Started right up, no happy lights on and quieted up in a couple seconds after she got oil pressure ! Whew !!

wow,I just hope my new to me 04 dodge with the 5.7 hemi holds up for a few years.so far a year with it and I have been happy.
I was looking at trucks last year and the spark plug stories had me looking at gm and dodge and even older toyodas instead of ford. If a spark plug is a pain to get out,what would that mean for the rest of it?!!!

I purchased a 2011 F150 with the 3.5 ecoboost in 2013. It had been rear ended and totaled, then purchased and repaired by the owner before me. It thus had no warranty. It's been a great truck regarding gas mileage(18mpg @72mph, 20 @ 65, 22@55), and HP and torque similar to my 6.2 gas F150, but factory flaws not covered due to no warranty have eliminated my gas savings. The crowning one was a too small timing chain and tensioner that needed replacement at 110K miles for $3000. Every penny I've saved on gas has gone to repairs. Oh, since it's a direct injection engine, the raw PVC gases hit the hot intake valve stems and adjoining orifice and build up to narrow and choke the intake. Ford's fix at 100, 000 miles and out of warranty "replace the heads". There's an industry building in the larger cities to cob blast them clean without removal.

As I understand it, it's the 5.4s with the three valve setup that were/are having all the trouble. Mine's a 2-valve; I bought an Arkansas truck with an engine ruined by the former owner. Replaced it with a reman unit; have never had trouble.