I need recommendations for a product that can remove 107 years of grease (some hardened) on chassis parts.I tried some oven cleaner but it proved to be not strong enough. The chassis, axles, etc. have this grease combined with road grit that has become hardened and is pretty thick in places. It needs to be removed to restore. I also have to figure out how to remove 1911 tires which have petrified. Any ideas? By this way this is not for my 1915 Model T but for a 1911 IHC J-30 touring.

Ive used a hacksaw then used some bolt cutters to cut the beads on petrified tires. It usually works. Depending on how much wire is in them. Using a reciprocating saw makes things go a little faster. Removing road grime may need help using a scraper or what's called elbow grease in some situations.

I already tried hack saw and it’s working really well. In serious side, Thomas if you have some left over 1911 pieces or parts I will be interested.

I like WD-40 sprayed on and wiped off for grease/grime/dirt removal from suspension or anywhere else. I won't use it as a lubricant, but it is a dandy solvent which won't hurt paint.

Pressure washer on larger parts with grease caked on....

I use kerosene or diesel fuel and a stiff brush, then the pressure washer.
Unless the parts are small enough to fit in the parts washer. It has mineral spirits in it.

Get some small children with very small hands/fingers, tell them it is gratifying and fun. then return them to their parents as clean as possible with a copy of Mark Twain’s, Tom Sawyer.

Makes for a great story for them to tell their children.

For hand cleaning of greasy parts, I like wd40, and a brush. Just have a shop coat or old, old clothes on.

If the oil is hardened, DON'T spray some miracle degreaser on it. That will create a soft, greasy mess that is miserable to clean up. As you'll find out, there aren't enough rags in the world. Chip it off instead with a putty knife, screwdriver, etc. Then chips can easily be swept up with a broom.

After the majority of the hardened stuff is off, THEN hit is with a degreaser, wipe and follow with lacquer thinner or such down to the bare surface.

When oil eater first hit the market, I bought a gallon and watched in astonishment as 100 year old oil simply sluffed off the surface. Wonderful! Then the normal happened. The factory changed the formula (cheapened it) and it works about as well as Simple Green.......not very well. Now I usually scrape the majority off then take it for a pressure wash. THEN I use lacquer thinner for the final treatment. Gets it pretty clean!

I've had good luck with cheap oven cleaner from the dollar store. Cleaned up an oil pan with good results. Sprayed it down and used an old toothbrush to scrub, then let it sit in the rain to rinse. Took a couple of tries, but got it down to bare metal.

Lacquer thinner? Oh ya, we used to be able to buy that in taxafornia but can’t any more. It’s been several years.

For old, hardened, caked-on grease/dirt, I first use an old screwdriver that I don't care about and a hammer and just scrape away the big chunks and stuff in tight spaces.

The I use an equally low-value wire brush to take off more.

Finally, I use some stuff called Purple Power Cleaner-Degreaser in combination with the aforementioned wire brush. It really goes to town and works well. You can get it at Walmart.

I've read a few times that Totally Awesome Cleaner and Degreaser" from the dollar stores works very well and is inexpensive. I haven't tried it yet. Have any of you used it?

George and Don are correct. For the hardened dirt/grease (mostly dirt), scrape most of it off first then use the solvent of your choice. It's the same with sandblasting. Scrape that stuff off first so the blasting can deal with the tiny remnants.

Several years ago when I was in California I wanted to buy some lacquer thinner. At three different paint stores I was told they weren't allowed to sell it anymore. Then I went into a Home Depot and found a shelf full of quarts and gallons of guess what — lacquer thinner.

I was looking for a concrete remover and found a product online that was environmentally friendly and even gentle on the skin. The Home Depot website shows it, but they cannot sell it in California. Instead they recommend using Muriatic Acid????

I have used Totally Awesome and I do like it. It is only a couple bucks for a quart with a spray nozzle and then I buy the 1/2 gallon refill. It will cut grease and dirt but like most cleaners it's best to let it soak. Heavy crap should be scraped off like mentioned before.
A friend of mine who restores antique tractors shared some of his with me and got me hooked.

I bought a gallon of lacquer thinner about six months ago from our local Ace hardware store, no problem. You may be confusing California's law against lacquer PAINTS. I would imagine the stores you went to simply stopped carrying the thinner since they no longer carried the paint. The explanation of the clerk makes his job a little easier, that's all.

To start cleaning, I am with the elbow grease, scraper/old screw driver/chisel and maybe a dead blow hammer to get thru the grime crowd.

Stores like Home Depot are more geared to the construction crowd, Ace and such, more to the home owner, might be the difference.

To clean old heavy crud (packed dirt and oil)I start with a pneumatic needle scaler from HF to get the heavy stuff off than switch to a product called awesome orange, from the dollar store. I use a spray bottle and soak it over night, some times I cover with soaked paper towels so It won't evaporate,to keep it wet, than steam clean it and It's like new. 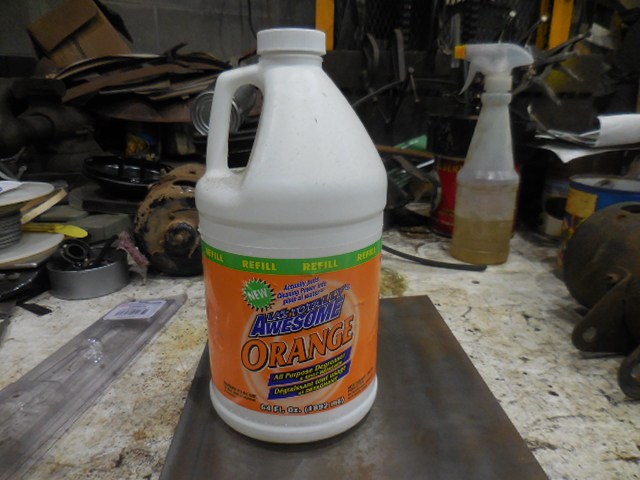 I have used the "Purple Power" stuff and it works well, but it will remove paint to and take the shine off aluminum parts and Jet Hot ceramic coated headers.

09 works great. By mistake I got over spray on a greasy intake. Cleaned it right up. Only thing I use for cleaning now.
Don't confuse it with 409. It's 09

I have never found anything that Easy Off heavy duty oven cleaner won’t get off. You may have to let it stand for awhile to sink in and then apply several more coats, but it will get it off. Be sure to wear eye protection if you use high pressure water, as it might come back at you. A sharp chisel might help to get under the crusted on grease to allow the EasyOff access to the underlying surface. Solar heat will soften the tires, but I doubt if you have much of that, this time of year. A heat gun might work. Jim Patrick

The "Lacquer thinner" we get at the hardware stores in Califunny isn't as "strong" as what I used to be able to get from automotive paint suppliers. And I can still buy Deft clear wood finish here, and it is lacquer based & compatible with whatever comes in the "lacquer thinner" cans. Wood lacquer finishes have always (that I know) been different from automotive Lacquer Finishes.