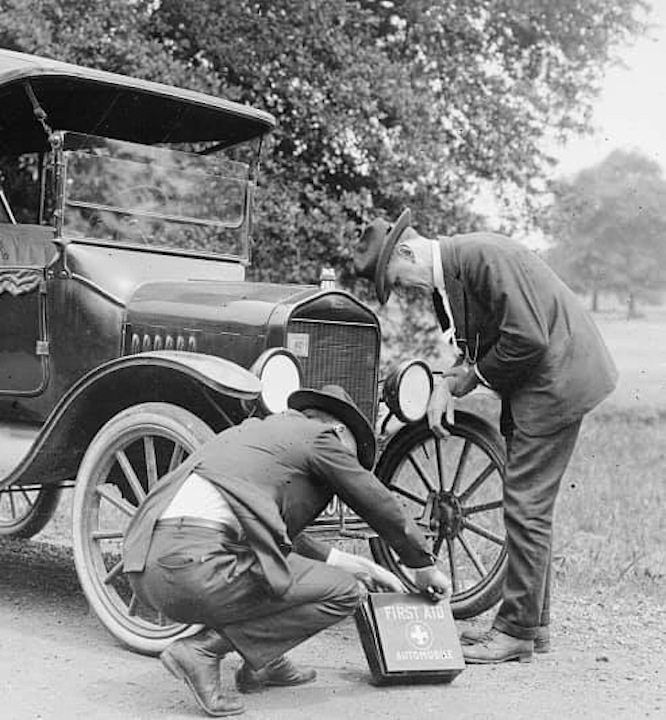 You know this is a posed shot because the guy playing the breakee is standing. In the real world he would be passed out on the ground. VOE.

Steve, some people have high pain thresholds. My grandson once broke both arms and the ambulance crew wouldn't believe it because he wasn't screaming.

Yeah...if that was my Father-in-law, he'd wrap some sort of grass or something around his broken wrist and finish working for the day.

I swear that man is an alien from another planet. He never gets sick and never shows the slightest complaint about injuries that are obviously terrible.

He recently had a kidney removed and, to the horror of the nurses, moved himself from one hospital bed to another within minutes after waking up from the surgery. He refused all pain medication and wanted to go home a few hours later. He's been retired for quite a while but won't sit at home. Instead, he started a one-man landscaping service and works in the Texas sun all through the summer.

-Jem-
Might it be a 'Mind over Pain' thing? I've had root canals done without anesthetic, yet will feel a flash of pain in my my legs when I see someone fall.

That must have been a terrific first aid kit. The ones we have today won't fix a broken wrist.

Forgot to fully retard and kept his thumb on the wrong side?

My late father-in-law, who grew up in the west of Ireland and used to wind field coils with me, worked for the gas company as a field pipe fitter. One winter on the job he slipped on some ice. He got up, tried to shake it off, and worked for weeks afterward, climbing in and out of ditches in the snow and ice. When his wife heard him groaning she almost literally dragged him to the doctor. To his great chagrin, he was off work for months afterward so his broken hip, with five pins in it, could heal. He just shrugged and said that as one of 11 kids in his dirt-poor family on the Irish mountainside, you took care of yourself and never sent for the doctor. Different world back then.

Les, thumb location won't save you if you crank dangerously.

As I get older I don't feel as much pain when I get injured. Sometimes I will look down and see that I have put a hole in my hand and it is bleeding and have no idea how I did that.

"What is that red stuff on the counter?"
"Oh."
"Guess I better wrap some electrical tape around that?"

Actually, to add to what Steve Jelf said, the "thumb on the wrong side" thing is really a lot more important when someone foolishly tries to "spin" the engine when hand cranking, and "spinning" the engine is something that should never be necessary and something you should never do! That's what forces you to "lock" your elbow with your arm straight, and that's just asking for injury!

I was cranking my T the correct way just pulling it over center, but I guess the spark was a little too advanced and it kicked back and wacked me on the back of my hand, didn't break any thing, but a good reminder, don't forget the spark lever.