Here's an easy question for a Friday:

When you are in normal conversation with others about a Model T, do you refer to it as a "Ford Model T" or a "Model T Ford"?

I wonder if Ford was consistent in their literature/documentation from that time one way or the other.

Being ambiverbose, I use both.

I think Model T Ford is most usual. Suggested this to our British Author friend but the book came out using Ford model T, instead. Both CORRECT!

Could be a region thing, Model T Ford seem to roll off the mouth for me.

I catch myself saying it that way too.

I have always said Model T Ford and my dad did also.
I think grandpa (his in law) saying T Model frustrated him !!

Whenever I look up parts, the clerk always asks for Year, Make, and Model in that order. So, I say 1926 Ford Model T.

You get some English people saying T Type - think they're getting confused with MGs!

Probably doesn't matter. We always used to measure torque in "foot pounds", but now it's "pound feet"! Why? I dunno,.....?

I just say Model T and everyone knows what I am talking about.

I had never heard one called a "Model T" until the time in my life that the forums came along. Until that time it was called a "T Model".

Same with a cotter key. I once got scolded by an out-of-stater for calling it a cotter key, and that the correct term is cotter PIN. FWIW, I later that day read that Henry called it a key also.

Here, Model T Ford is usual but you often hear Ford T.
In Australia, T Model is used but probably not in all areas. Wayne in NZ.

Easy answer, this is the "Model T Ford Forum" and the Model T Ford Club so for me it is always Model T Ford. Other makes also had a Model T in the line up so Ford needs to be part of it. I have also seen others called a T type as late as 1987 when GM built the Buick Grand National and T Type models. In 1917 Indiana Truck Co. had a 1 ton Model T along with a 3 ton Model R so Ford was not the only one to use those letters.

Model T Ford works for me but Ford Model T is OK too.

The folks I grew up with and around and called
it a " T Model".
My Father always called the 24 Coupe my grandfather gave me years and years ago Papas old Ford.

My wife'a grandmother lived to 102 years old.
I once talked to her about her first car. It was in the early 1920s... She said it was a Ford. Simple ad that.
If you look at the old literature, you'll notice it was referred to as a Ford. Model T wasn't widely used until the Model A came out.
Just my observation

Never thought about it till now. It got me to thinking. Other cars I've owned were referred as

But it's always been Model T Ford

As usual we can blame our beloved first editor as he called it “Model T Ford” though he allowed those in the south east to call it T Model.
RIP Bruce, I know you would blame the Post Office :-)

Here in the old north state, NC they call it a "T Model". Me being from the north, call it a "Model T Ford".

Pop occasionally called it a Rolls Canardly...
Rolls down one hill and canardly get up the next !!

If I say I own a 1917 Ford runabout, there is actually no need to include "Model T".

It depends on whether you're an expert or an amateur. -A pilot will never say "plane;" he says "airplane." -Amateur spectators will often ask me, "Is that a Model T Ford?" -Heck, they once asked me whether the radiator was solid gold or just gold-plated. -Another asked me if my car was a Rolls-Royce. -They don't know a whole lot about brass cars, but bless their hearts for at least being interested.

To genuine, pure-blooded car guys, it's the same as any other major classic: First the year, then the brand, then the model, then the body style. -For example, this here is a 1911 Ford Model T Torpedo. 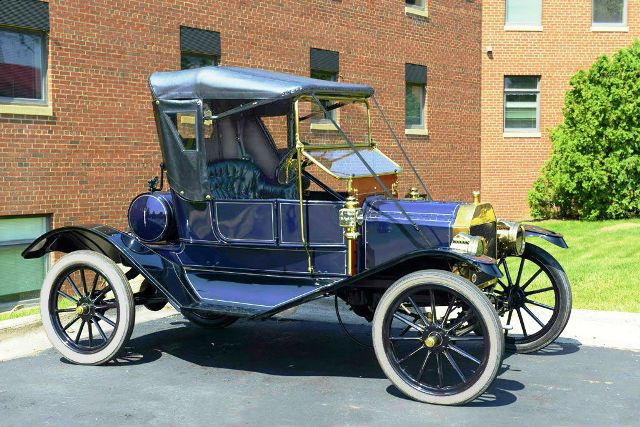 In danish it is Ford T. Succeeded by Ford A, Ford B, Ford V8, Ford Y, Ford C (the latter 2 being "Henrys cars for Europe".

Well...not all go by brand first, Model J Duesenberg, L-29 Cord, Vee 12 Packard all come to mind, as does simply calling a car by its model name only, such as a Mustang, a Super Bee or Camaro. For my part I call mine "the 13," a car that is a 13 Touring, but oddly my 26 Touring is simply called "the Touring."

I just tell people it's a 1912 Ford. That satisfies most people. But some will reply by asking, "Does that make it a Model T ?" Then the conversation begins. But for many, just the year and make seem to be adequate.

"Ambiverbose"? Steve J, did you make that up?

Making up words is injunktifyable.

When I was building mine my grandpa used to always talk about getting “modelber rims.” I never could get what he was talking about, my dad either, but I’ve since thought that he probably meant demountable rims. I’m sure he hadn’t thought about them in years. As for the car, most people around here say T Model.

For some time now I have been trying to imagine a "normal conversation" about Model Ts.
Is there such a thing?

When people ask, I tell them it's a Ford. They seem shocked and disappointed that it could be the same as a third of the cars in the parking lot instead of being some rare exotic.

Model t, as per the next generation. At least that's how my son refers to one (age 4)

I knew of more than one old timer who could not say "Model T" without putting the word "damn" in front of it.

My elderly next door neighbors Willie and Lois White, who were both born in 1913 and grew up with Model T’s and are both now deceased, always referred to my 1926 coupe as a “T Model”. I never asked them why and wish I had asked, but l assume that is the way everyone back then referred to the Model T. If it had remained that way, we would all be discussing this on the TMFCA Forum.

When I registered my first T with personalised number plates, I tried for TM-1916 but that was taken, so second choice was MT-1916 so unbeknown at the time that I actually got it right with the second one.

we own several Model T Fords!

In Holland it's just "T Ford" with most people, pronounced like [Tayford].

I have always called my Model T a T MODEL !!

Remember, many car companies made model T's, even Chevrolet! Of course, today, nobody knows that! So, let's just stick with what we are comfortable with.

I guess I didn’t think about “T Model” when I posted the question, but glad the Southerners corrected me. I definitely hear that term around the fields of Hershey every year.

It’s been fun reading through all the responses. I’m going to tally it all up at the end of the year and post the results.

I was setting at the restaurant for breakfast this morning and someone asked me about my T Model. Seems a lot of people around here call them by that name. I catch myself doing the same sometime.

I always get asked is that a model T or an A.And they never say Ford.It seems every one knows it's a Ford even young people.

Oh the truth is I use Model T Ford or Ford Model T, when talking to people that are unfamiliar with them. With ones that are it's "The Model T" or "The Model A".

My answer to anyone asking is "Ford T".
If that doesn't drop the penny then I add the word "Model" into it....which then seems to make it clear to the general public.

If you are going to tally up? Put me under the "ambiverbose" column. I may have felt the need to needle Steve J a bit, but I like that word! (Whether new or not.)
Besides, I do use most the various words in most the common orders. Model T, T model with or without Ford (first last or sometimes even middle), I use them all.

Fun thread! Thank you to all. (Especially Steve J)

In Sweden it's like in Holland: T-Ford, though the pronunciation would be a little different

Perhaps we should count how many people googled the word “ambiverbose”...+1...(grin)

Maybe if you look at my profile you will see way they never ask if it is a Ford.I didn't think of that.

People with Mustangs or Corvettes don't bother to tell you they have a "Ford' or a "Chev" (swear word), They are proud enough just to say "a 66 Mustang" or "a 58 Corvette".
That is all that is needed.

I grew up in the Los Angeles area so this might have been a local thing, but in the 1950's many called them "T bone". Or just shortened it to "bone". I also heard my father and grandfather call them "T Model".
Norm

I've heard people use both terms. The T model seems to be used by older people and Model T by younger people.