I'll start with some explanation. Jump to the last paragraph if you just want the question. Thanks in advance!

I see that the TW instructions make it very clear that if the cam nut extends beyond the step on the shaft, the nut must be shortened. https://docs.wixstatic.com/ugd/84c6a6_8177bce5ff8248f5a7fcb855f4b72c10.pdf Looking at the parts, though, the TW rotor does have a section of tube that extends beyond the arm. So, the tube should slide into the cam nut ID, allowing the rotor to shoulder out on the shaft, right? I don't have a TW, but was thinking of getting one. The modern seal was loose and backwards, which is what made me dig into this in the first place. It has a CR 9613 in it, which doesn't appear to be what others use (9853 or 9878). I'm aware of the OD variance and tricks there, though.
https://www.modeltford.com/item/3221CB.aspx

Here's the main question(s)...Is it normal for the cam nut to extend beyond the camshaft step? Does it just happen to depend on the cam and style of nut you're using, or does it indicate there's a problem? How would one know if the nut had backed off (loosened)? 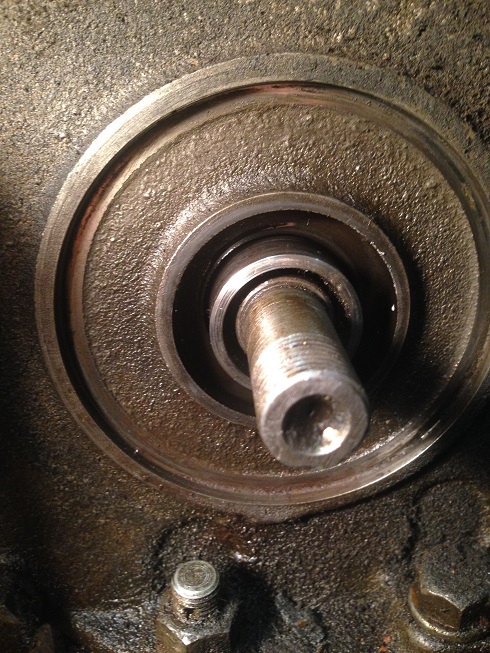 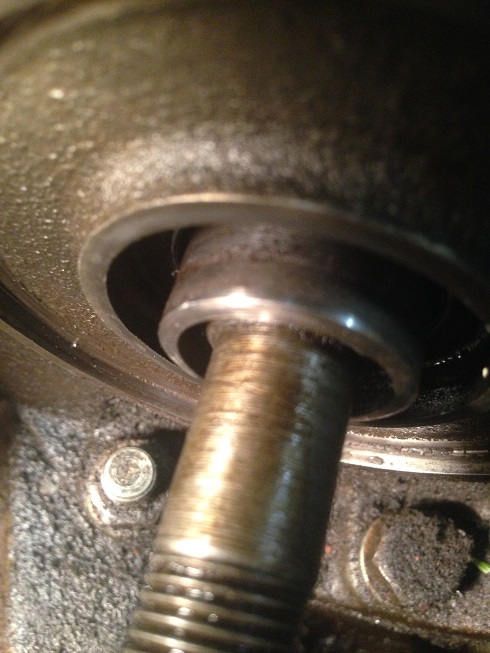 Your missing a seal, the shoulder on the nut is for a seal to run on, either the original felt one or a modern, if you are going with the TW then you need to fit a modern seal.

Sorry re-read your question, yes the nut is to long, it should be shorter than the lip on the cam.

I just tried a TW brush holder, it should have enough length and has a small enough out side diameter to fit inside what nut is overhang.
My be someone fitted a washer behind the nut.

You may have a fiber timing gear. That will do it, or another brand where the center part of the gear is thicker than an original Ford gear.

I concur with Larry. Its likely you have a thicker, fibre timing gear. It’s also possible, but less likely that you may have an improperly made front cam bearing.

I just looked and it does indeed have a fiber cam gear. At first I thought it might be bronze looking through the oil fill hole, but I took the generator off and can tell its fiber by the feel and sound of it. All the teeth look perfect. The engine was rebuilt in 2005. I do not know if it was a new gear at the time, and the PO said it probably has 200-300 miles since rebuild.

Soooo, yet another topic of great debate. Some are cut and some are molded... many people hate them and blame crank breaks on them...many people run them a very long time without problems....sigh, nothing's easy.

I do not recall any one blaming a crank break because of stripped teeth. ?

From what I read, some think the cam gear strips and the engine fires out of time (for example, early enough in the compression stroke to twist the crank backwards while running forwards). Just what I read, I don't have any experience or first hand knowledge of it.

I experienced a striped timing gear and a broken crank, apparently at the same time. On a tour many years ago going down hill long Curvy grade. Engine stopped running. Quickly found the striped timing gear. While tearing down to replace the gear, discovered the crank broke at an angle inside the center main. Always wondered if the the broken crank caused the timing gear to go or vice versa. Anyone else have both at once?

Thanks, Larry. I'm inclined to agree. On a front-contact timer like a New Day or Crystal, having the rotor against the cam nut and therefore not quite bottomed out against the camshaft wouldn't cause a problem (that I can think of) - it would just compress the brush spring slightly more. In a radial-contact timer, the roller/brush wouldn't be axially centered in its contact ring. I would think that as long as the lock pin goes in, the rotor would be considered back far enough. However, filing a small slot to clear the cam nut rim would allow the rotor to seat properly. Many rotors have an extended backside so the arm clears without a slot. From Franks's comment, the TW rotor will work without modification.

On a related note, I'm scratching my head trying to figure this paragraph from Snyder's nylon cam gear description..."This is a new standard,improved timing gear for the Model T Ford. It was made from the original Ford drawing. The gear is made of nylon 6, the web of the gear is thicker than the original metal gears. This requires the camshaft nut to be cut down to prevent the timer roller/rotor from shorting out on the cam nut. A cut down cam nut is supplied to use with this gear. No other modifications are needed.".....Why would it matter if the roller rotor shorts out against the cam nut? The camshaft, cam nut, and rotor are all in electrical contact anyway. It seems like the only thing you can't have short out is the 4 cover contacts to anything else or each other. Everything else (timing cover, shaft, nut, seal or shield, rotor, timer cover) touch all the time anyway. Right? Am I missing something? Maybe they meant so that the arm doesn't rub and mechanically hang up, not allowing the roller to freely ride the contact ring surface.

Early cam nuts were shorter than later ones, so it is possible that a combination of fiber timing gear with early cam nut may not cause interference of the nut with the roller/contactor.

With a roller timer or TW timer, the contactor does not fully ride on the track, but most people don’t realize there is an issue because it still runs, just has a shorter life.

Thanks for pointing that out Adam. There's an S-style New Day on it now, and the arm barely hits on the nut. It must be within 0.030" of shouldering out in the shaft, because it seems to have been working okay. A couple swipes with a file on the backside of the arm will make it a non-issue, though. So, I have a fiber gear and S-style timer - both disliked on the forum. I'd really like to find a Leich Magnetic Timer, but have been unsuccessful in the classifieds. I have one on the '14 and really like it.

I would turn that pan bolt that is sticking up down with the nut on the underside. Looks like an excellent opportunity to short a timer wire.

S style new days are fantastic! If you use a pure carbon brush.
If you have the opportunity, do try t.

I've never heard a good thing about a Snyder New Day. Stay away from them. If you don't file the slot I mentioned the whole timer case will wobble.

Well now you have heard a good thing about them.
Trust me, they work.

Good catch, Jim. Larry, I don't follow the wobble comment. The rotor would be tight against the end of the cam nut via the nut on the end being tightened down. Yes, the brush would be compressed more, but so long as it didn't bottom out in the holder, it seems like it would run as normal. There's enough slop between the brush and brush holder to allow the brush to sit flat against the timer cover, even though the rotor would be cocked by any slop between the rotor ID and the cam OD. I don't see where any force to cause case wobble would come from. Not arguing, just scratching my head.

I once had a .gif of the new kind running with the brush too tall.

Oh look, i found it, hope the image loads.

Kep, that would be so tall the brush is compressed all the way and it's still lifting the cap. Maybe that's what Larry meant. Mine was out by the 0.100" and still didn't bottom out the brush. Maybe it's a different brush that didn't come with the S timer originally. I notched it and verified that it will be about half compressed when assembled.

The photo posted by kep is what happens if you don't file a notch in the brush.

I bought my 18 with a timer just like that Kep! It's in a box now.
Hmmm, a notch you say Larry? Cool.