Dorothea Mackellar was an iconic Aussie Poet who wrote the lines, famous down under, "I love a sunburnt country/A land of sweeping plains, /Of ragged mountain ranges, /Of droughts and flooding rains."
Well droughts are something with which we are familiar. The outback country is currently in drought, as it was in this photo of the 1915 drought when the mighty Murray River dried up. 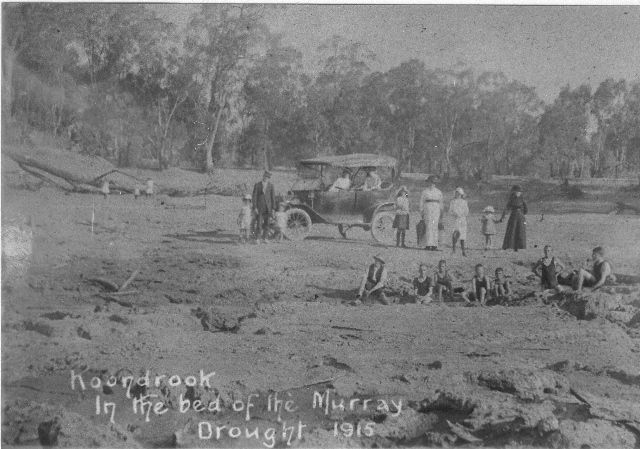 I don't think all those people arrived there in that one car!
Nice photo. Looks like Eucalyptus trees along the "river" bank.
Thank you Tony H for sharing this.

Wayne..I reckon you're right about the numbers in the car. You would also be spot on with the foliage... River Red gums feature along inland systems.

Here is another photo.

Going by the fallen tree in the background it looks to be the same location. Koondrook and Barham are on either side of the Murray. 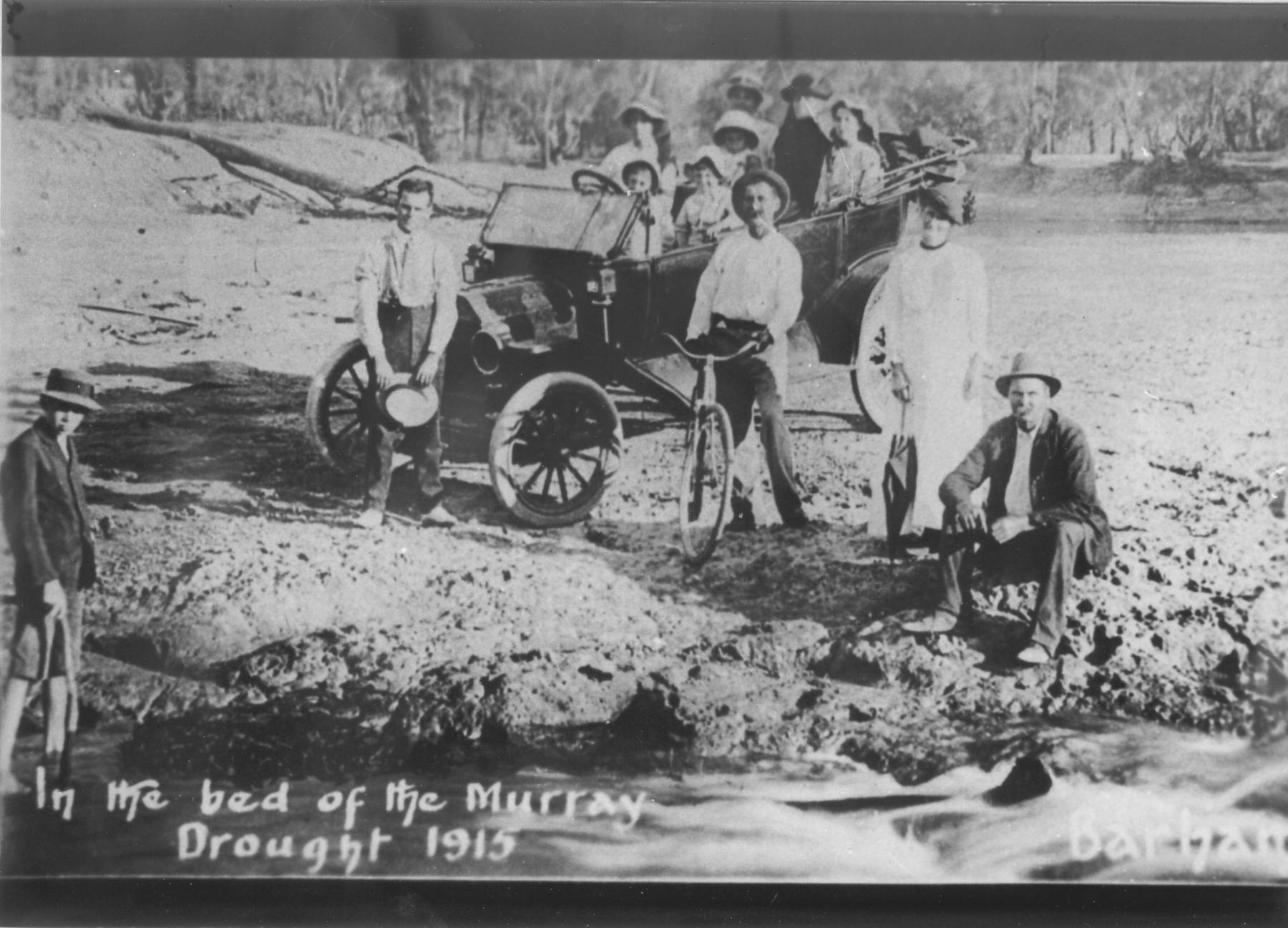 Definitely looks like the same spot, but the car has moved a bit, if it is even the same car? Not quite enough detail in the first picture, likely a '13, could be a '14. The second is clearly a '13 T Ford.
When I was a kid, my folks received three Eucalyptus trees (potted) as a gift. My dad planted them some distance from the house because he said a Eucalyptus tree's one "aim in life was to lay down". I have since read that is how Eucalyptus trees propagate themselves. They grow tall, eventually fall over extending their reach and planting their seeds farther away from their base. I don't know if that is really true or not. Maybe our Australian friends can enlighten us on the subject?

Another wonderful photo. Thanks all.

Wayne, If a gum tree lay's down it's only because it sick of living, river gums can live to a 1000 years old, however most trees in Australia are self pruning, they can drop huge limbs without any warning.

Also I forgot to mention that the seeds are shed and spread by wind and water.

Frank v E, Kind of thought that. I was just reporting what I had read years ago before the internet. Just like on the internet, if you read it in a book, it must be true? Right?
It sounded funny to me. A falling tree wouldn't spread seed very far. Most seeds are transported by wind or animals to extend their coverage and chance of survival. Small seeds often have burrs which catch animal fur. Larger seeds like many nuts and fruit pits appeal to slightly larger animals, which carry them off to eat later or elsewhere. Abandoned pits and nuts have a chance to grow and propagate much farther from a tree than any tree could reach by falling.
Those are my thoughts

Thank you for the reply!

Yes Wayne, if you read it, it must be true, which reminds me of once reading in a 1960's encyclopedia that Barramundi, a fish in the top end of Australia and through Asia, was a fish unsuitable for human consumption.
Guess what is a delicacy today!

Wayne, here is the car detail from the first photo. 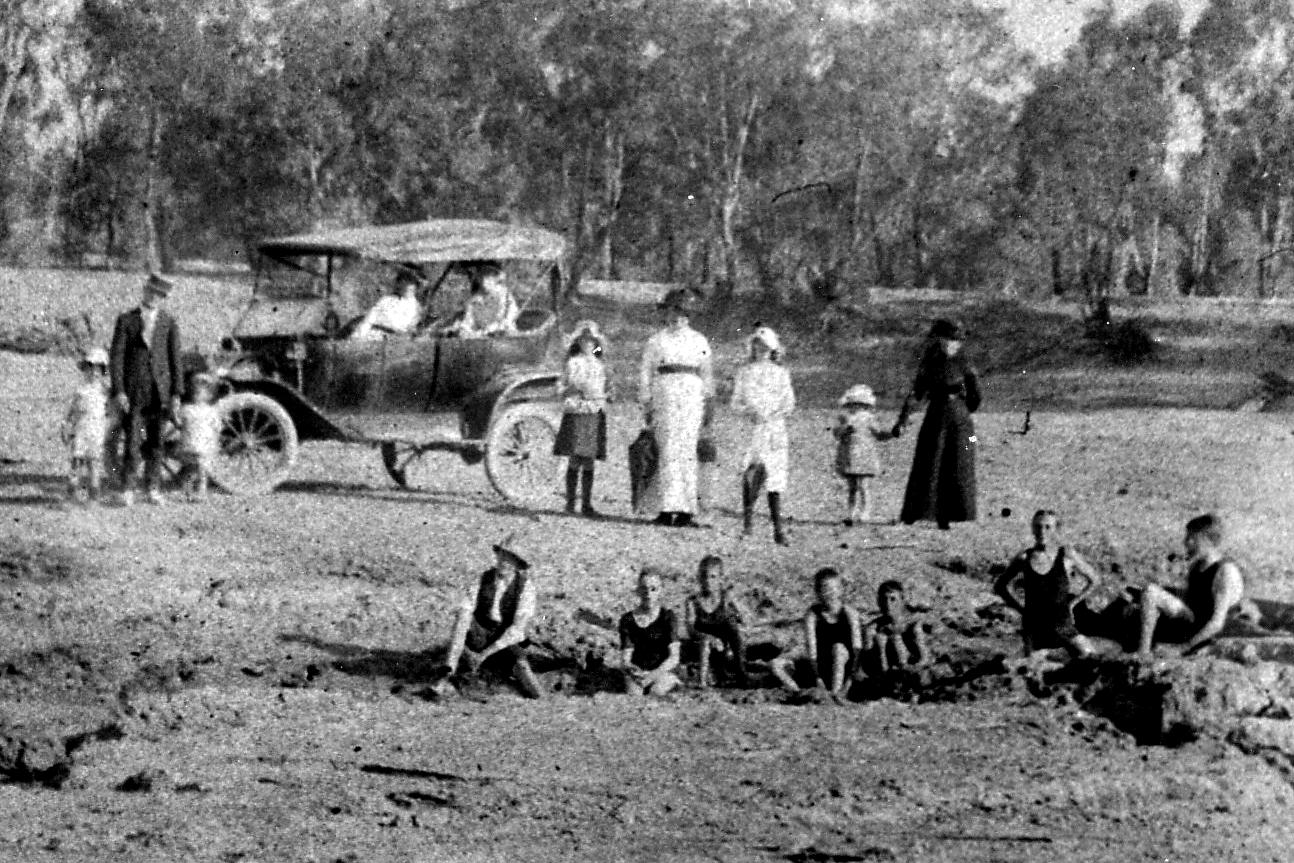 Definitely a '13! So it may be the same car. It would be nice to know the story behind the photos. Family outing of some sort it appears.
It looks like the same lady in the black dress and hat. Otherwise, I can't see anyone I would definitely say is the same, but many may be. Swim suits in the one picture may have been changed into and/or out of. A fellow with a bicycle in one photo, and another fellow in a full suit in the other.
Regardless, a wonderful look at family life back in the day.
Thanks all!

Wayne, there is some info on the photos here:

The gumnuts containing the seed of most eucalypts can be quite large but the seed is often as as fine as dust, and so it can be quite is easily spread by wind. A river red gum can be as enormous as is the biggest oak, but its seed is miniscule compared to an acorn.

The Koondrook/Barmah area provided much of the redgum used in railway sleepers throughout the eastern states. The timber is still harvested, under very strict conditions, and is now used in ways which show appreciation of its qualities.

The paddle steamer fleet which plied the Murray/Darling river systems was built on redgum hulls. The timber is largely un-affected by water and is as tough as old boots. If a hull was holed when it hit a snag, [often a tree which had fallen into the stream] there was plenty of repair material readily available.

The Califunny connection to your Gum trees.
Back in the latter half of the 1800s, some "experts" found out about the fast growth, strength, and construction qualities of your Eucalyptus/Gum trees and their advantages in ship building. So a number of enterprising souls scoured the USA for investors to raise a bunch of money. They then went to Australia, hired local labor (labour?) to find seedlings and shipped many thousands of them back to good old California where they were planted in appropriate climates for rapid growth. After which, they waited patiently to reap tremendous profits from their investments.
A couple decade later, they began to harvest the lumber. Only then did they figure out that their "experts" didn't actually know as much as they thought they did. Instead of getting the proper species of Eucalyptus/Gum with good straight grain. They got some variety that grew a crooked grain that when cut warped severely, and split so badly that it was nearly useless for anything but firewood.
To this day, there are numerous Eucalyptus groves scattered around the state. An earlier day monument to incompetence. However, they are beautiful, and smell wonderful!