We need to make a professional looking repair to this original car. We do not want to use the Ford Repair Kit originally produced by ford to repair this problem. Primarily because it is down right ugly. Any suggestions, recommendations or previously used techniques would be greatly appreciated. Many pictures of this car from the William Harper collection are in a previous post dated Dec 15 2018. 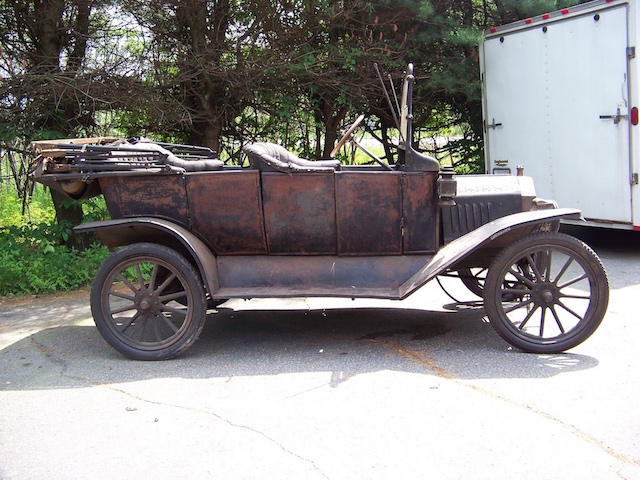 We are thinking that we will remove upholstery and make a hidden repair to support the body better. Then reattach original upholstery.

is the main seal broken? if so there is a steel plate on the inside of it. i would make a longer one it will not show. charley

Why not remove the body from the frame and add some properly bent steel angle to stiffen the main rail of the body. You could also sister some wood to the frame rails and then remount it to the frame - straight, stiff, and unseen unless you crawl under the car.

The sill is not broken Charley, and I am not sure if the metal may be weakened or not. The car belongs to Dan Stewart who is tied up this morning. Once he gets time he'll address questions like Gordon's. Appreciate the responses.

Ford did produce a bracket that attaches to the frame and bolts to the body. I actually own a pair of them. I went with the formed steel brace. It looks fine to my eye!

there was also a bkt that went in the back corners of the main sills,i think it was all a kit.to fix the sills. charley

Dan has just registered on the forum and is waiting for his authorization to post messages. So I am translating for now lol.

Dan has the Bolt on kit that bolts through the rear threshold to the body of the car. He will post pictures of his kit soon..

Dan is thinking like Charley that he would prefer to use a brace / bracket that comes up off the rear cross body mount, up through the corners of the body and mounts to the wood within the body underneath the upholstery.

This should adequately support the back section and make it very rigid while hiding the modification.

Our 13 did not have the factory braces and only sagged a little. We put the top up when we had people in the back seat because the doors would not stay shut. The top fasteners keep the body from sagging. Note, this was an early 13 and came out of the barn with a red body and brass lamps in 1953. 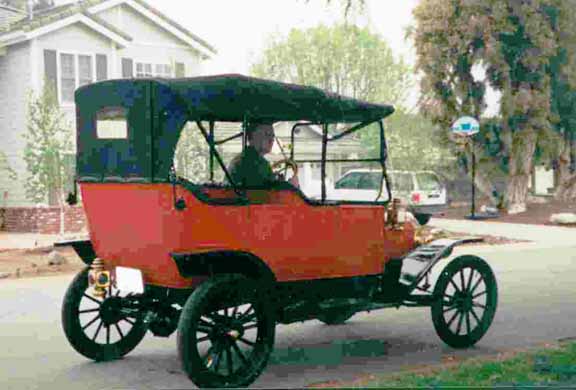 Frank, Was the red paint original or part of a restoration? This 13 has a one man Vanguard aftermarket Cowl and Crawford Top. Which does not have a center upright iron.

Here's some pictures of the Vanguard cowl and Crawford one man top. Not sure if the irons are Vanguard or Crawford. Notice it does not have a center upright 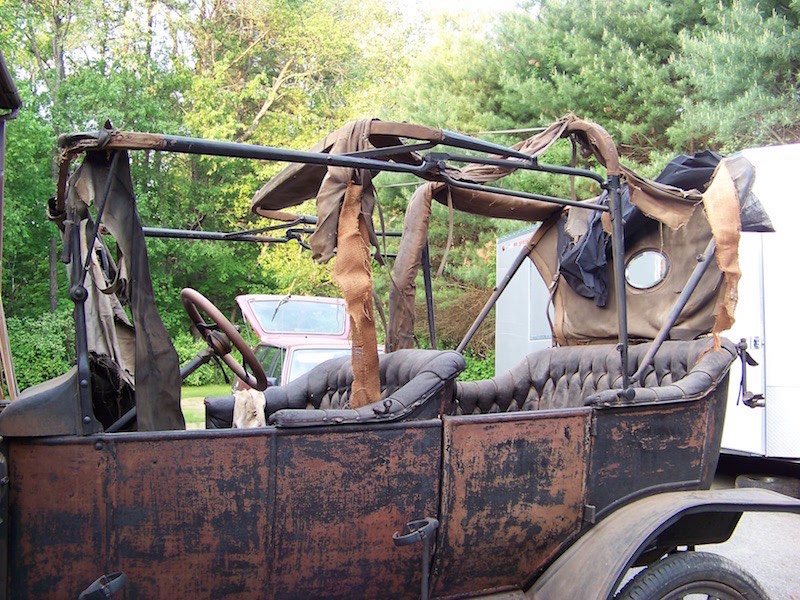 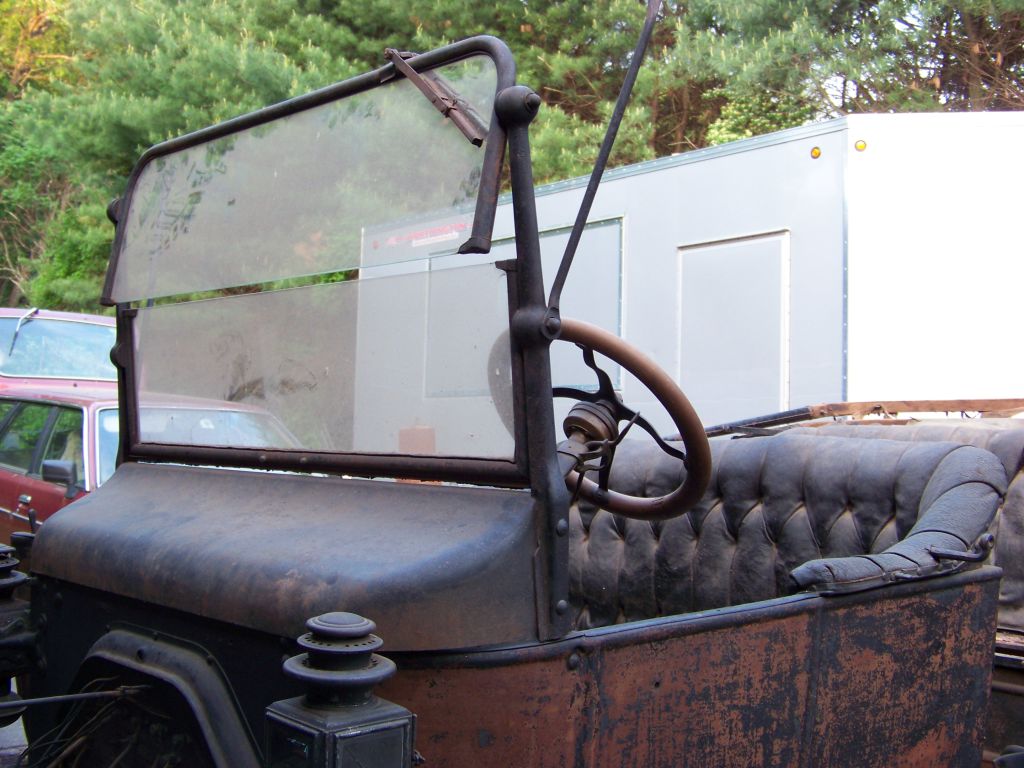 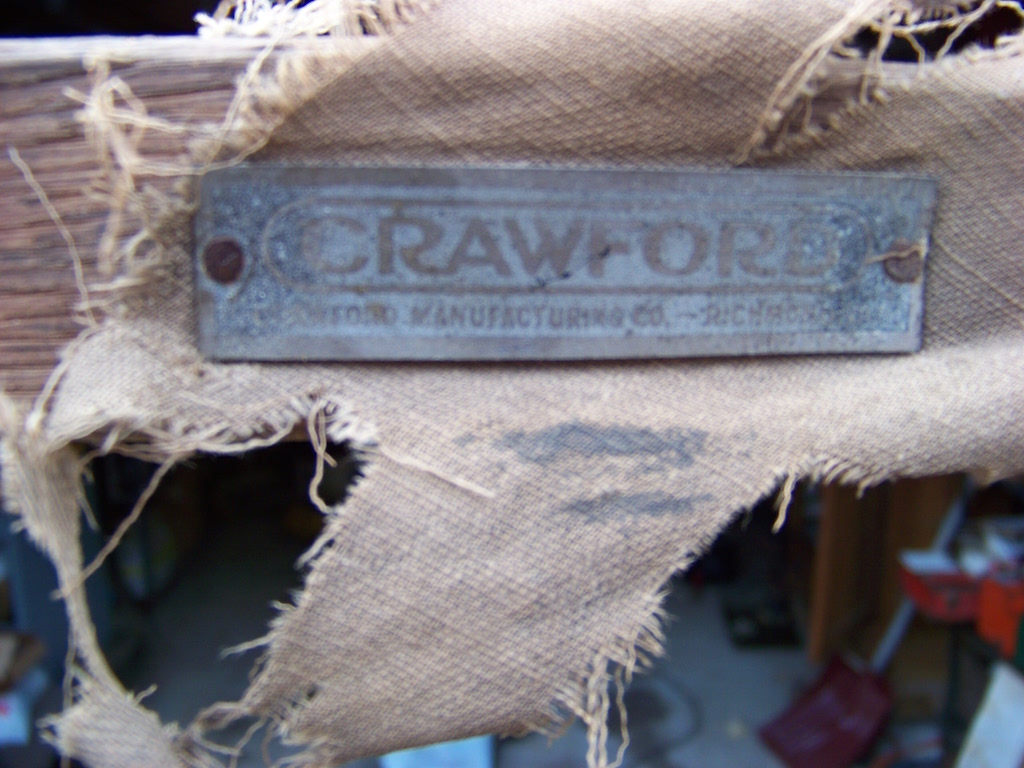 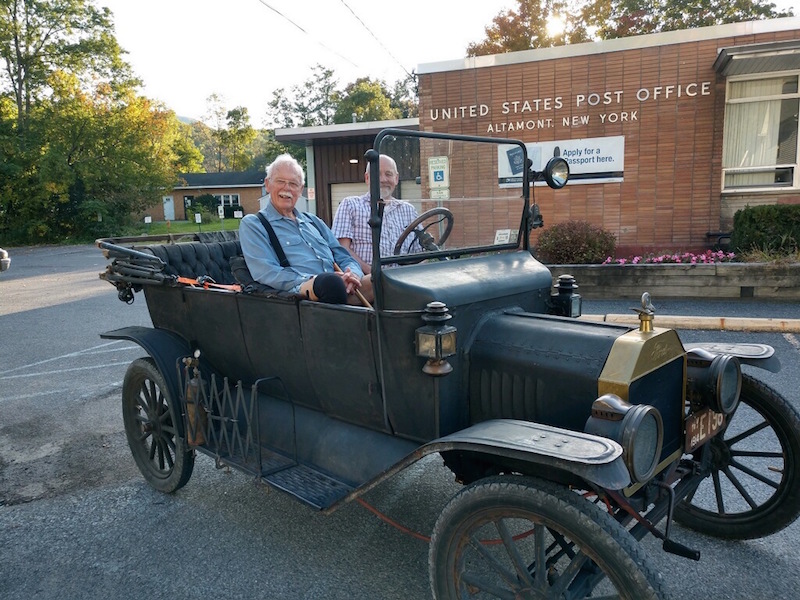 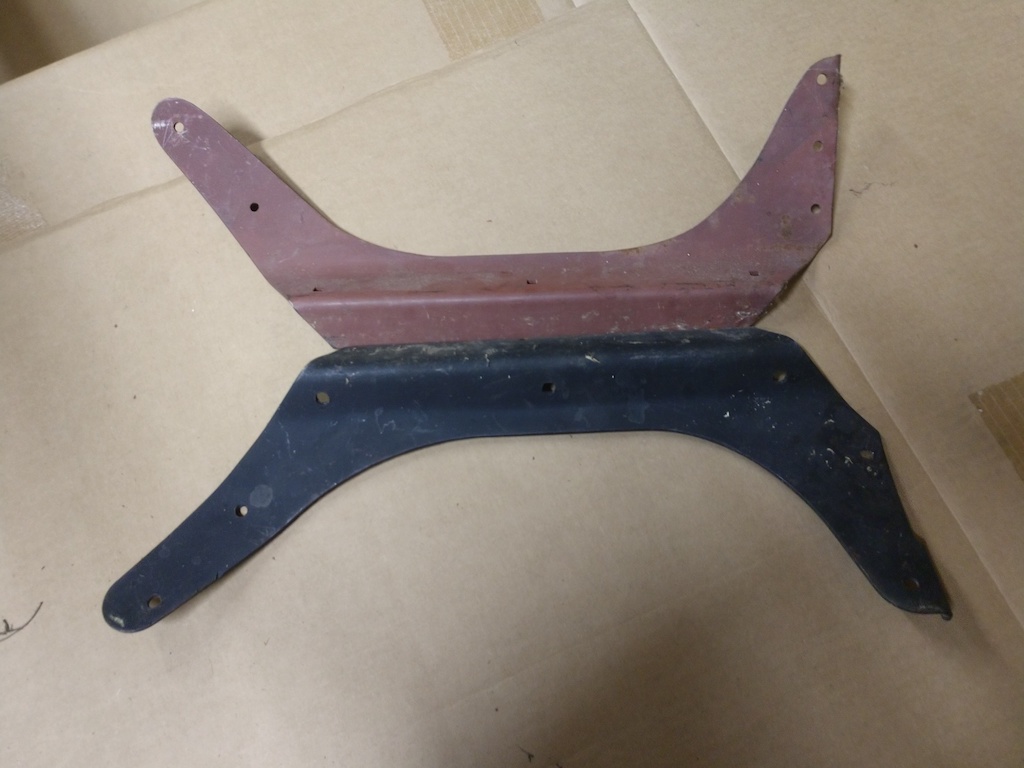 Les, Does this look like the brackets you have? Did you use them or
make your own ?

Is this the car that Don Birchall used to own?

Larry, Dan bought this car from Lang's around 2011. So I would assume its a car from the North East.

Back in the early 1950s I was talking to a local Minneapolis Ford dealer who started selling Model T Fords in 1912. He told me that a heavy set couple wanted a ride it the new Ford. He proceeded to drive down Lake Street in Minneapiolis. After a few minutes the rear section of the touring fell off, dumping the couple on the street.

I have a set of brackets off the car which I would be willing to trace for patterns if anyone needs them.

Rick
The brackets I used are identical to your pictures. I found one and made the other one. I see someone is offering to provide tracings.
Depending on the demand, I might consider doing One only production run to help out the hobby. I would get them CNC cut and then form them

Hi Les Schubert. I wouldn't mind having a look at those brackets you spoke of that bolt to the frame & also to the body. Could you post some photo's of them?
Thank's

I have a set of brackets, don't want to sell them, but I'd loan them out if someone wants to make them.

I don’t understand the reluctance to use the Ford issued rear body braces. They qualify as probably the closest thing to the first factory “recall “!!!
It’s not like they aren’t Ford correct. They shouldn’t cost anyone points at a judging event!!

Kim Dobbins, which type brackets do you have? Are they the type that wrap around the threshold of the door or the type that bolt to the frame?

Kim's doesn't have those brackets, and the doors close perfectly!

Whoa! Sagging frames? Did this affect all Model T's or just certain years? I have a '17 that I'm rebuilding so if preemptive action is required it would be good to know :-)

Re-reading some of the posts above, is the problem with the body, not the frame and again, does it affect all years?

Hi Tim, the problem is only with the back part of a 1913 touring body, not the frame

Hi Larry, Kim's post says he owns a set of these brackets. That's what I'm referring to, not his car.

Daniel, I have the same brackets that Rick posted above. Kim

Attended Model T Tuesday at Gregg Stewarts shop in Altamont, NY this week. Because of the holidays we decided not to address the 1913 Sag repair until after the holidays. Then we will pull the car in one night and open up the upholstery. Evaluate and make a decision concerning the wood repairs needed as well as the best way to reenforce the body.

We will post pictures as we progress along. There's several other projects needing to be done before the guys take off for the Model T Snowmobile Meet in February. Will post updates for those interested in our progress.

I think that the bracket Rick is asking about were mounted on the frame and held the stills up. I had a pair on a early frame I sold. It was a early 13 frame. They were just a couple angle brackets. Would not require removing upholstery. Hope that help

Hey Dan, The upholstery will have to be removed anyway to allow us to make some needed wood repairs. Once opened up , we will be able to make a decision on the best course of action to take.