Some months ago the crankshaft on my 1914 T broke during a tour up to Julian. It has since been replaced with a new Scat crank and all the bearings rebabbitted by Antique Engines in Escondido. I tried the pan on a fixture and sure enough it was horribly bent. I’m not sure if the pan bent when the crank broke or the bent pan caused the break.
Anyhow it’s going together quite well, a little slower than usual but I’m trying to be very through and make it as correct as possible. 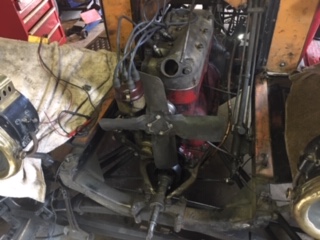 I am adding a rear support for the KC Warford that has been on the car for about a decade. Hopefully it will be running before the New Year. 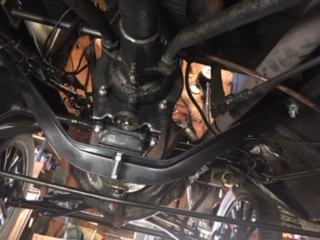 Sounds like a Merry Christmas and a Very Happy New Year ahead!

Hi! Tony, I think you will like the scat crankshaft. I have one in my touring and it runs very smoothly, especially when I wind it up. Much less vibration. Concerning the crankcase, you might never know whether the bend came from the broken crank or the bend caused the crank to bend, but know this, the alignment of the 4th main is quite critical to the life of the crankshaft. Hopefully you will be able to straighten it before you install everything. I am looking forward to seeing you on many more tours this year. Happy holidays!
Norm

Glad to hear you getting back in motion Tony!

Tony
Consider one of my “floating transmission shafts “. Available from Dan Hatch. It is no substitute for a straight pan, but it removes the stress from pan flex

Hey Tony, here’s another possibility. The Warford without an additional support bent the pan, which broke the crank. Good idea adding the support. Just be sure to allow it to move. I’m sure you know that. Hope some of your tours correspond to some of mine. See you in Sierra Vista?

The motor already had a “floating transmission shaft” but if my initial measurements were accurate, the pan was out of line by over 1/8”. The pan has been straightened on an original fixture, it took a lots of gas with heat being applied near the nose, at both side supports and around the drum area. Quite a mess.
My plans with the 14 Touring include tours to Sierra Vista,
Buellton and Billings. Hopefully we’ll make the AZ speedster run in late March with Ricky, the green speedster. Then the US F1 Grand Prix in Austin in October. Busy year :-)

If you have a four dip pan, they have a habit of doing that.

The four dip pan does not have the interference problem.