According to the Canadian May 1923 service bulletin there is a drive gear and pinion change and they are not interchangeable .

I don't see this in the Repro parts books. I don't have the MTFC club rebuild instructions which may make note of this

I have done a Overhaul on two rear ends (the HF way not fancy shmansy F1 rebuild ) and one is currently being used . The driver and spare were
built from the best of the best parts from 10 rear ends some dating back to 1913 and others who knows what year they were or what was in them and what parts are in the two overhauled except I put aside the Veteran Spider housings . No need to wear out an earlier part. The driver had done 5000 km in a Driving Season before I did the overhaul to see how it was holding up . Nothing to see so slap her back together and use till the Driving Season is over and will be strip down again . I don't hear anything odd and as mentioned nothing to see when opened up for overhaul so was I lucky on the driver and need to inspect the spare which is easy based on the identification mark on the gear so no need to pull it apart. Do I need to keep this in mind when I swap out parts eventually 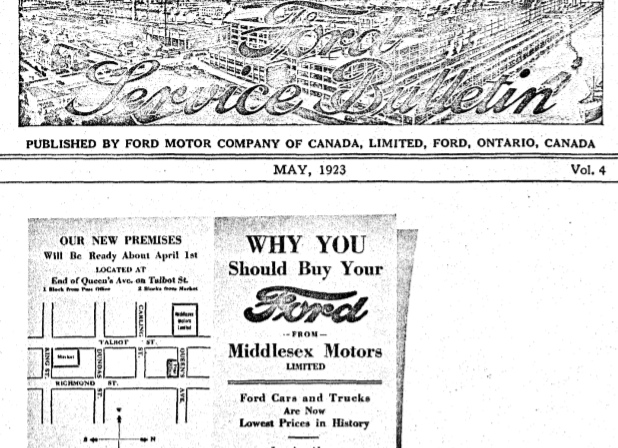 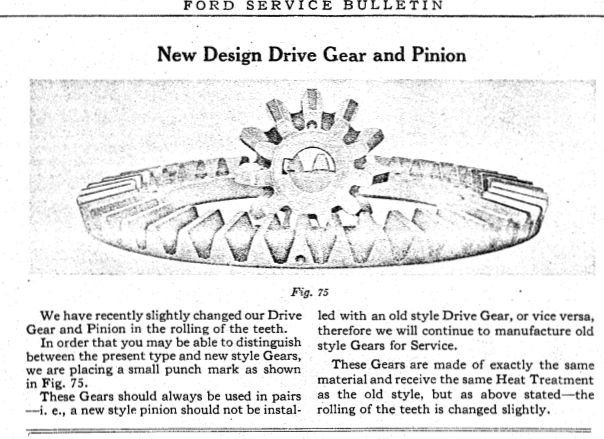 Touch wood! I've never had any issues with re-building diffs out of the best parts out of several but your bulletin could explain why I've heard others that sound like a fire siren.

Just did an inspection of the leftover usable parts (but outside Ford Specification for use )and the mark exists on two of 3 ring gears . No spare pinions just the one in the driver so cant confirm that exists

I am having flashbacks of that mark but not all is visible and think it relates to the timing gear marks more than the Diff.

For the technical people
Call it playing with fire but I put Dextron 3 in the Diff . Specified for my 1979 W116 Mercedes so got to be good enough for a T. 5000km and counting and sounds like any other old banger in restored condition and by the sounds of Franks remark better than some. Overhaul time showed nothing to see so close her up and filler her up

I wonder if this was a change in the pressure angle?

Well... learn something new every day.
I've had pinions with that mark. Put them together with crownwheels that didn't. They sounded just fine and didn't wear any faster than normal. Mostly because they were nearly worn out. Quiet though.

Hans: Why Dex 3, the viscosity is nowhere near the same. I'm sure it might work OK but quite a different fluid.

When T's were first made the petrol and oils were contaminated with all sorts of rubbish.


The sediment bulb was there for a very good reason. You had to filter your own fuel fresh from the can. In period articles about oils and grease they state to check every batch no matter what the previous history of your use of it is. The next batch could be a death trap for your car .

Yes some newer oils/fuels are not recommended for earlier engines but thats because of the materials used to build the parts. This is because 2020 knowledge knows better. In 1910 they knew next to nothing in comparison and what advance materials are in a T to not be recommended for


I have driven 3 work vehicles for 300,000 each by topping up the oil and filling with fuel .Cost minimization being the object. Taking it in for service costs money and time (money). At 300,000 Km the rest of the car is old and wearing out .Its now old and worth scrap .Pumping $5000 upkeep into a car that will be worth not much more than a scrapper is not worth the effort and hassle of service day and lot of them by 300,000 km

This is possible thanks to modern technology and better than the days the points may not last to the next service point.

The death of each was the timing belt being used for 200,000 more than recommended. A car with a new engine in it still worth scrap and old with age issues adding up so out with the old and in with the new

Yes I still have starters, brakes, battery and so on die and deal with which last longer than Old School thanks to the Tech in them


Back to oils read the NY taxi company tests on change and no change oil cars.

If your a purist buy some fuel , add a handful of dirt, a cup of water ,some oil and presto c1910 fuel

I will use new tech fuel and oil

5000 km on a rear end .I opened it up for overhaul and saw nothing to worry about so bolt it up and push it under the car. Dextron 3 at the end of the driving season when I have done another overhaul / inspection of 80 - 100 year old parts

I have never seen or heard of such a change in the gears on USA built Ts. When assembling a rear end with mismatched gears, I do put the pinion gear on a finger and roll it around the ring (crown) gear to get a feel of how well the teeth mesh and roll together. I have run into some pairings that did not match well and I found another of one of the gears for a better fit.

By the way, no hisses or boos from me. I am a well known cheapskate and somewhat proud of it. Years ago, I had a nice older work truck with a defective engine. I got and rebuilt another motor for it, and being pushed into a rush (long story), I didn't check the position of the drain plug on the new motor. (Oops!) After two "fresh engine" changes, I never again changed the oil in that engine. Every four or five thousand miles, I changed the filter, and added a quart. That engine ran fine for over 350,000 miles (over 500,000 km). The engine was still running well, but everything else on the truck was SHOT! I cannot tell you the exact mileage I got out of that engine, because at 325,000 miles? The speedometer quit.

Hi Wayne Thanks for the positives on another post.

I think I am safe after a night of brain pain . Like you I used the high tech tool of feel, sound and sight. I find them never to be out of calibration . When I put the rear end together I saw nothing odd, felt nothing odd , heard nothing odd so must be within Spec. so if they are not compatible they either have run in or are a matched set

I will however keep a note of this and one day may have two versions of the part to miss match and see what the result using my sight, feel and sound tools. When I find an issue I will look for the punch marks to see that explains the problem or its just past its use by date. That's the case of the spares I have that are out of spec .Looked at it, ran a finger over it, those two test saved the need to test fit for the sound of it

There is one drawback to the way you and I use a car as an expendable tool.( man toy version excluded) The person who buys it one day to restore will have what's called here a 90% complete car for restoration .They fail to add the second half of the line which is 30 - 50 % rubbish . May sell as a Parts Car , good luck finding any usable bits

Hi Wayne. Your high mileage reminded me of adds for Mercedes in the 70s. Million mile cars going strong . Now I have a Benz so treat what I have to say with some caution. I will say the car will do 2 million no problem . If I did all that's in the service books and 3 - 4 engine rebuilds and a pile of money that will buy 4 new cars it will do that without braking a sweat. Now try an tell me your American cars will use more money to do the same 2 million miles. I bet you don't spend half what the Benz will take to do 2 million miles

Hans, as a U.S. high milage, low maintenance guy, I would say you are correct. Dave in Bellingham, WA. U.S.A. Merry Christmas

Hi Hans S, I have enjoyed your posts! I am sure there a lot more people that won't admit to going low maintenance with their transportation vehicles. That older pickup cost a bit much for gasoline, but made up for it with seventeen years of high mileage, no payments, and cheap insurance (liability only, no comp or collision coverage to protect the finance company). A third of a million miles was a lot of tires, brake shoes occasionally, a few sets of spark plugs, and points about twice a year. But those are all consumables. I think I only replaced the fan belt once in all those years.

Have a wonderful holiday my Southern friend!

Hi Wayne You call your self cheap ( low maintenance) but you just said a few SETS of plugs. Sounds like you throw your money out the window as you drive
When mine ran rough I replaced the defective one ( less than a set on the life of the car) and gaped the rest once a year
I will allow it if they were older than the cars I did the high Kms in . The newer the Tech the more the computers compensate for cheap .As you said points I will say they were older than what I had to thrash . I should have been a Test Pilot for new models. I could find a recall part faster than anyone the way I drove the work cars. Without exaggerating I could crack an anvil if I was a Blacksmith. If you cant break it your not working hard enough to earning your pay. I must admit a set of spanners that came with a lifetime warranty defeated me , but tried my best , clearly I still have something to learn , but life is not over yet so just might do it.


I am still on the fence still over your low maintenance. You may be a save the planet person and recycling or just too lazy to fill your bins with stuff

Back to the post topic . Late 23 Canadian parts book. The change was in May 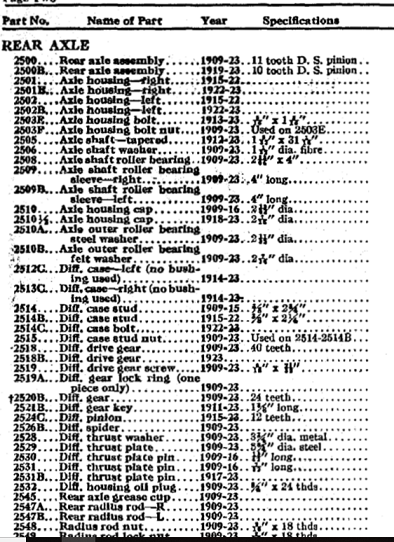 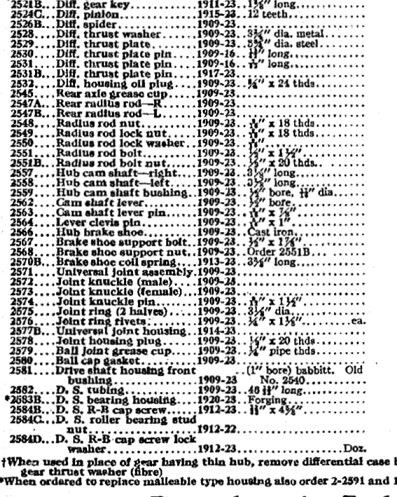 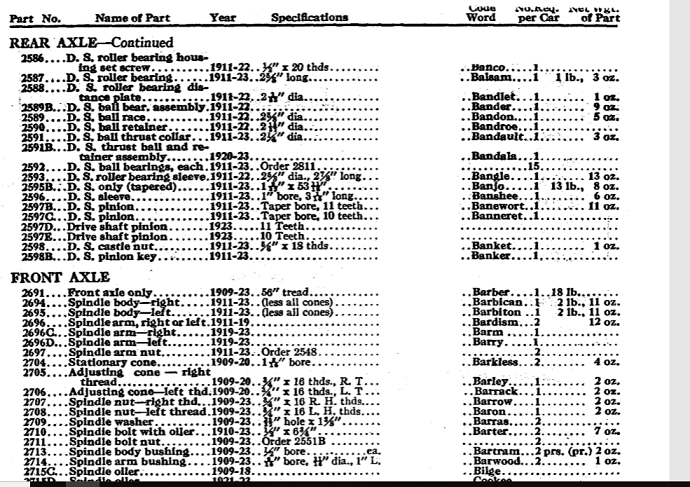 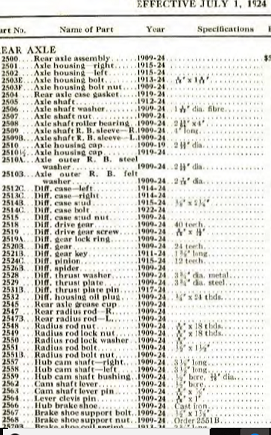 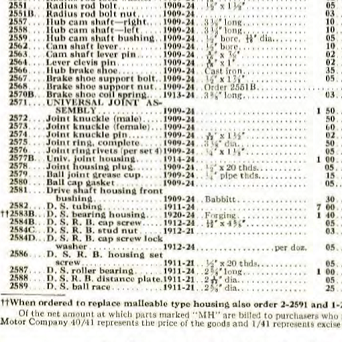 Hans, Two of those sets of spark plugs had burned the electrodes back to inside the porcelain, after about sixty thousand miles (about eighty-five thousand km). I think I got all the good miles out of them. Besides, it was beginning to misfire occasionally.

Wayne The members of the low maintenance club think your a good candidate to offer a membership to but just cant get past the fact you used pack/s of plugs. I argued you got a bad batch maybe but someone black balled you and now we have to wait 5 years for you to be up for membership again.

That is okay Hans, I am too cheap to pay the dues anyway!

Wayne & Hans - The discussion between you two guys reminded me of something:

My father-in-law used to change his own oil rather than take cars into expensive service agencies for service.

His wife always had the newest of their two cars, and he used to drain the oil from her newer car, and he'd then "install" that drain oil into his work car.

Hi Harold The wife and kids come first. I don't need an image to uphold ,food or a safe reliable car but if there is money for me leftover ,I will eat