Just got back from visiting the Sharpstein Museum in the town of Calistoga in the Napa Valley Ca. If you want to see a great exhibit on early motoring. No autos just neet stuff relating to our hobby. - this is a very worthwhile trip. 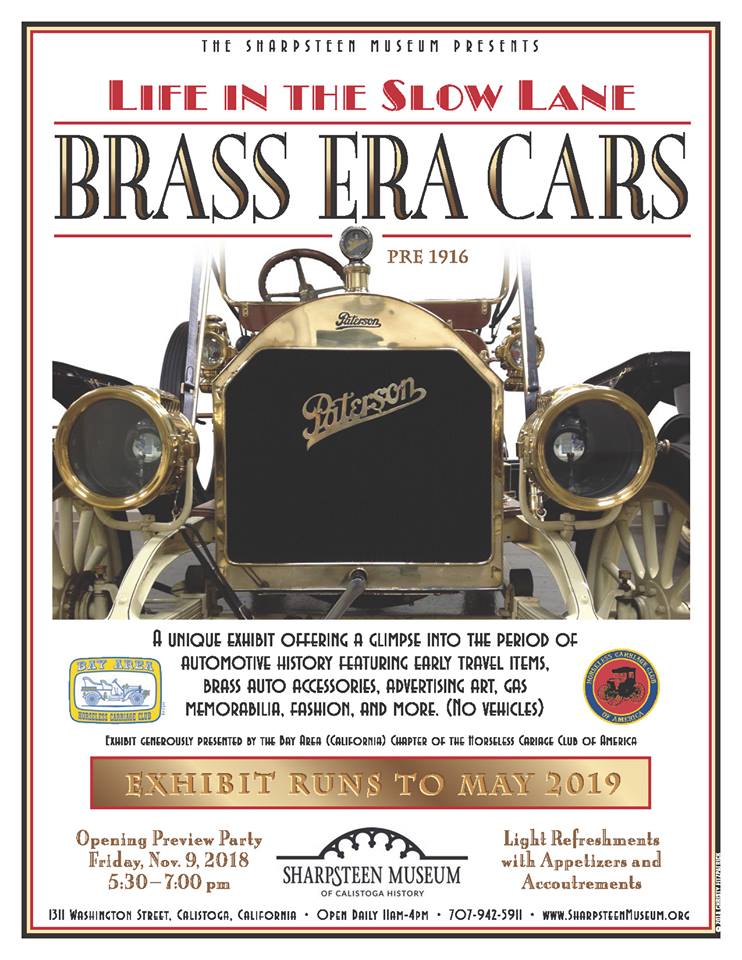 Ben Sharpsteen was one of the original founding members of HCCA, and he son Tom had quite a few Model Ts, including one that had mostly Dodge Brothers parts on it.
Ben was one of Disney's original cartoonists,was part of the Firehouse Five plus two, although some sources don't list him, but Tom claimed he was in the group. Tom himself played Clarinet, Albert system (There's a bit of trivia, not many use it nowadays.).

Hum--Mom and Dad have a very old Clarinet in the attic.

Thanks for the lead as to what it might be.

Ben did a few covers for the Gazette back in the fifties. I believe all of them are available at the museum in Calistoga.

I first met Ben while I was working at Harrah's Automobile collection. Some years later my wife, son and I were visiting Calistoga and Ben's Museum. He was there and we renewed our earlier acquaintance. Ben showed us around the museum. We came upon a show case where his "Oscar" was on display. My son asked what that was and Ben proceeded to tell us that he had won that Oscar working for Walt Disney. He then opened the case and took the Oscar out and handed it to my 10 yo son to hold. Ben then told my son how difficult it is to earn one let alone hold one.


Ben was a very low key guy charming and very down to earth. He was a man whose career started in the early days of Hollywood and especially Disney. One can only imagine the shoulders of the who's who he rubbed with over his career.

Ben did quite a few covers for the Gazette. One thing he liked to do was to put a joke in his illustrations, so sometime when you're looking at one, check for the oddball thing going on somewhere in the drawing!
BCG, Yes, low key; his son was too, and I also was acquainted with his co-worker and instigator of the Firehouse 5+2, Ward Kimball, who was also very charming and low-key. I've been told by those who had family that knew him, that Walt Disney was also like that.

I think that Ward Kimball used to do a comic page for the Gazette called Asinine Alley too. This would be back in the 50's.

My favorite Kimball Asinine alley was at the time the Edsels were introduced. He had a drawing of a black model t with an old horse collar in front of the radiator to give the model t the "Edsel" look.That was nearly 50 years ago and I still smile just thinking of it.

Another funny Asinine Alley was it showed some astronauts landing on the moon, and there was a Model T brass radiator laying there.

Wouldn't it have been fun to be there with these guys when they got together. It was probably much the same as our local chapter meetings but look where it led to. I heard they would bring odd brass lamps to meetings to match up in pairs.
Just a bunch of funny old car guys.
Thanks for the steps into the past.
Rich

The Kimball Moon picture is an interesting story - Ward told me somebody working at NASA saw the print in the magazine, and came to him and asked about the original painting - he gave the painting to NASA and they had it hanging in one of there L.A. area ofices.He said he was flattered and honored.

Early days in the Seattle Tacoma HCCA meetings members would bring odd and single lights to the meetings, If 2 of the same lights showed up with different owners they flipped a coin and the winner got the other light.