I live in the inner city and I need to put turn signals on my T. I would like to know what people have used to make them.

I have a 6V system. I have considered adding a garden tractor 12V battery to run lights and future accessories (GPS, Phone charger, etc). I am not particular which power source I use. The main benefit that I see with a 12V system is the wide variety and availability of components.

I have found a source for LED lights/fixtures that are small for both 6V and 12V systems. I am not a big fan of the look of the “stock” tail light parts.

Many of the T Part Suppliers have a variety of switches. But again I am not a big fan of their look. I have an idea on making my own switch out of an extra horn button bracket. This could be very challenging. I also would like to have hazard lights if possible.

I would like to know if someone has a good looking switch setup and what should I be looking for in a flasher unit.

One last thing; if I go with a second battery (12V) to run the lights, I would assume I should “wire” all the grounds back to the battery as the car is already using the chassis as the ground. 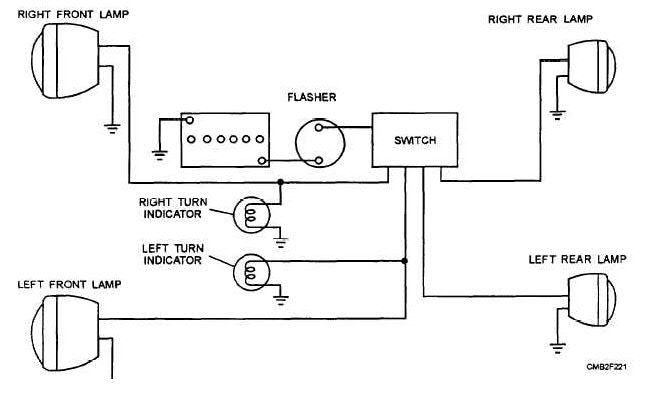 How do you wire in hazard lights into this diagram? I am not sure if hazards are actuated by completing the circuit (in the switch) to both the right and left side’s simultaneously or by some other method in the switch.

Pretty sure you would need a a second switch if you want to run hazards.

Also, you might want to consider running a stand alone wire to the front indicators. If you just tap into the wire for the headlights, the headlights will blink when you put on the turn signal.

Yes, you can do it that way but if that's a thermal flasher, the blinking rate may increase noticeably.

Don't think that diag is correct. All right and left positives should be connected together. In other words one positive wire for the right lights and one for the left. This leaves you with 3 connections at the switch: positive from the flasher, right lights and left lights.Your best bet is the Signal Stat turn signal switch which has a lever for turn sigs. and a pull out tab for 4 ways. Most parts houses carry this "replacement switch" under the signal stat name and it comes with a diag. Buy it local and save shipping. The switch will obviously work on 6 or 12 volt systems. If you choose to go to 12 vts. with an additional battery I don't think using the body as a ground will be a problem. My personal preference would be to stick with the existing 6 volt system. I have not tried to buy a 6 volt flasher locally.

This is a diagram that I found on the internet. It is nicer looking than the one I had drawn up. I was also thinking there would be three wires from the switch and splitting them at a terminal block (if I used a 12V system), all hidden behind the dash. (I hate seeing wires). It sounds like I still need to determine how a hazard flasher needs to be incorporated.

The issue with buying “parts” at any of our local part stores is you must tell them the make, model and year of the car you want the part for. The stores just seem not to be able to cross reference anything by a description.

The major con about a 6volt system is finding the required parts.

I will also incorporate brake lights (on separate led/bulb filament) but that is easy (if I go with 6 volt), with the lights that I am considering. Otherwise, I will need a relay to actuate the running lights, when the headlights are turned on.

Speedway Motors sells a neat 12v turn signal module to operate either LED and/or regular bulbs. It is operated by 2 momentary switches, one for left and one for right. The module contains a timer which operates the lights in proportion to how long the switch is activated. The range is something like 3 sec. to 45 sec. The timer can be deactivated at any time by tapping the switch. (You can't forget to turn off the signals.) Also if both buttons are pushed at the same time you have 4 way flashers that will stay on until both buttons are pushed again.
The module is smaller than a deck of cards and can be put anywhere. I have these on 3 cars and they work very well. There are 2 versions, one requires 4 separate lights, the other will use the existing brake lights if your car is equipped with 2.

You can have both batteries grounded to the chassis and your 12 volt signal lights too.

All you do is put a jumper across between the left and right turn signal wires. Turn on the blinker and then turn on the cross hook-up to get four way flashers. I also put in a piezo tweeter on each side so that I can hear the beeps.

Use a double throw switch for the left and right with off in the middle for the signal control. Put the jumper along side the other one. hide it between your legs under the seat on the left side in front of the tank on a car with the tank under the seat. 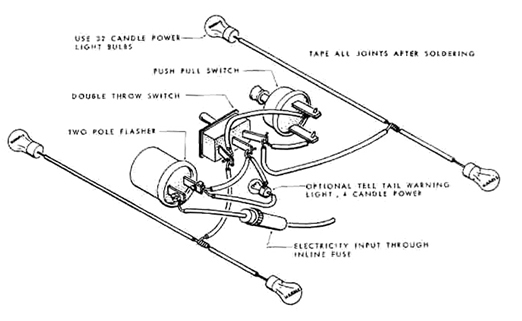 I just finished the new wiring on my racer today and buttoned everything up after months and months of working on it with limited spare time. I custom rolled my own turn signal system to work with the LED lighting I installed. Once I get ready to start the car then I'll know if it's going to work with the Ford ignition or will Seth's warning come to haunt me!!

I'll send you a copy of my wiring diagram sometime Jason - it's enough to make a sane man cry and run fer the hills!!

Garnet's right about that last line in his post - believe me!

Garnet knows I'm just having some fun. His system design and drawings are elegant indeed!

I use the same system. For the battery I use my 12v Devault cordless battery as a power source. Its small and last for many days without a recharge.


Frank, that will only work if you also turn the signal switch to one side or the other.

Bulbs at the four corners must also be grounded. I'm also wondering how that optional telltale warning light is ever going to illuminate with a shunt across it.

It must be, John.

I used a system just like Frank Harris but without the pull-on hazard feature. I run it on the 6v and have the three position switch (off in center) mounted under the front seat of my 26 touring. Works great, no ugly add-on hardware visible, easy to use. 6v flasher units are easy to find at motorcycle supply houses. I use a cheap one with only 2 prongs. Hear is a link to some pics.


I also wired in a buzzer to each side to prevent me forgetting to turn it off after the turn. That helped a great deal.

You could have saved yourself some money by using only one buzzer and adding two cheap diodes.

I am sure you are correct seth, but you were not here to help me and that was the path of least resistance in my electricity challenged brain.

Do not laugh Seth, but I got around the to loud issue by putting a band-aid on each buzzer.

I'm laughing because you have my e-mail address because its available at my profile and we've chatted before and I KNOW that you don't like spending money needlessly.

Ah, stubborn is as stubborn does?(sp) Or is that just being thick headed. I guess I have more consultants than I know some times. Heaven knows y'all have learned me more than a thing or three.

I know it is more expensive but why not buy the unit B J Miller sells and be done wiht it.. I have two of his units, one 6 volt and one 12 volt on two cars and they work great. It has a buzzer so I don't forget when I leave them on, especially when my wife is not with me. I use cheap clearence LED lights from Walmart. You might give this a shot. Control unit mounts under the seat. I really like it!!!

So who is BJ Miller and what is their contact info. I could be interested in their setup if it is nice and clean looking.

I like the beehives too. Got some vintage glass ones off T-bay for the front. Plastic ones in back at this point. I cold only fit the 3 C.P. bulbs in the fronts. I just squeezed some 21 c.p. bulbs into the rear blinkers. Much brighter and more visible.

B J Miller in the both magazines as a vendor. Ticken N Time I believe is the name of the company. His dad is Ron Miller of Miller's Antique Engine rebuilding. They both do first class work!
Tom

I could not find Ticken N Time! Not found through google, Vintage Times. I did find his dad on the BBB, but no website.