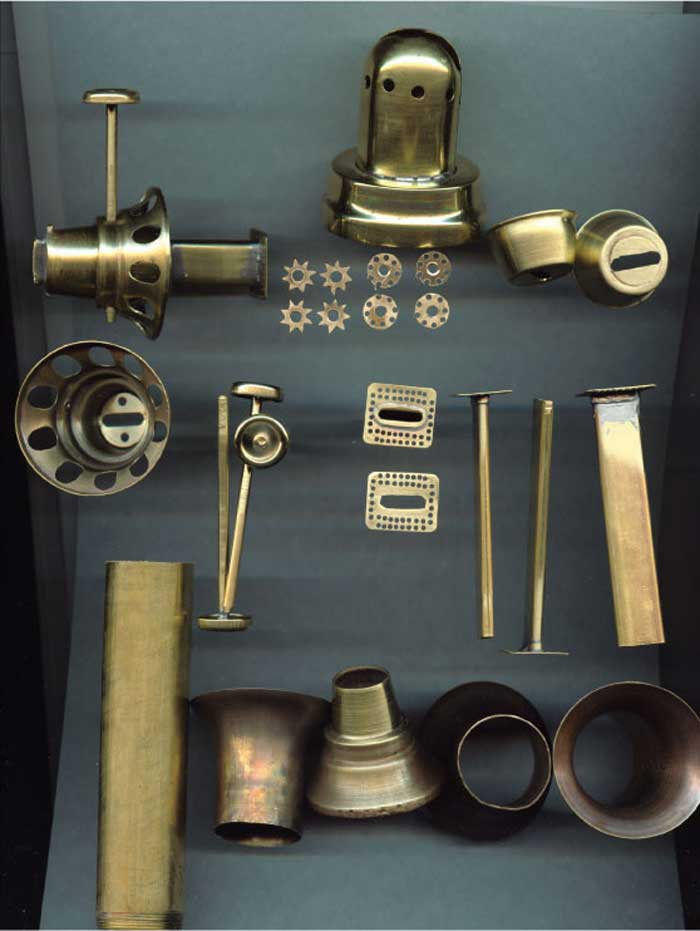 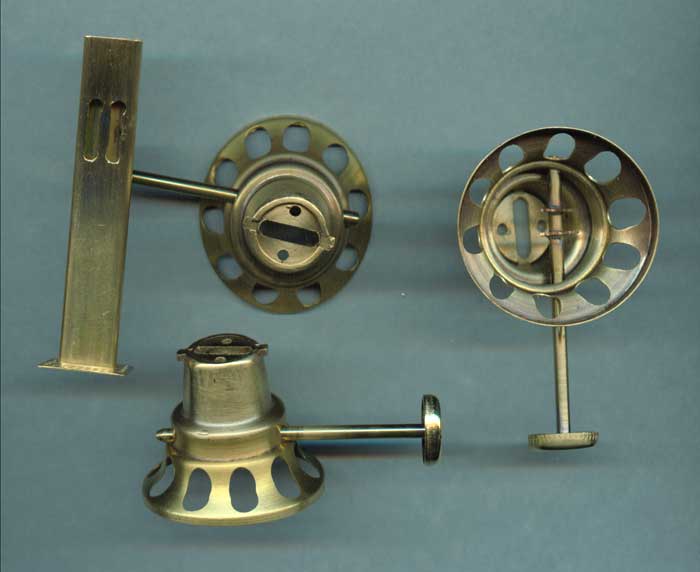 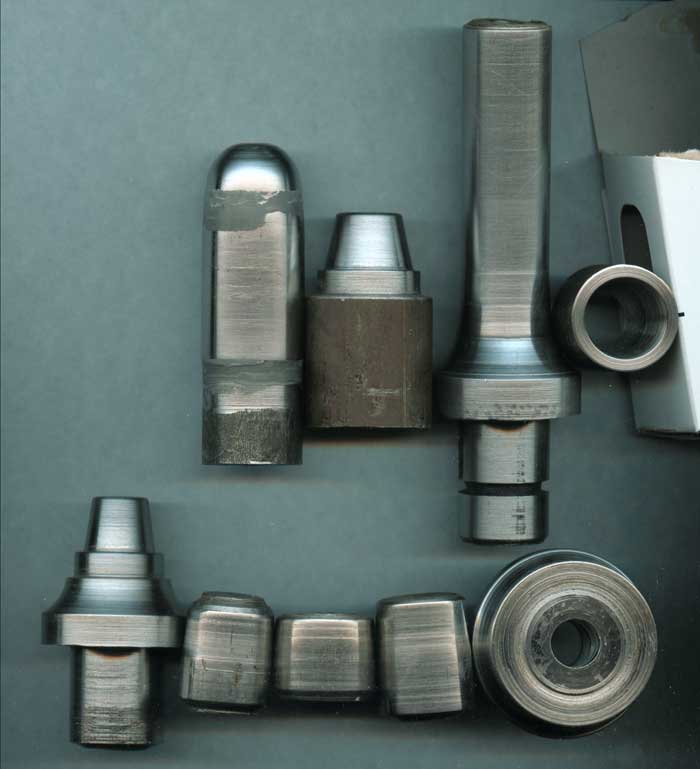 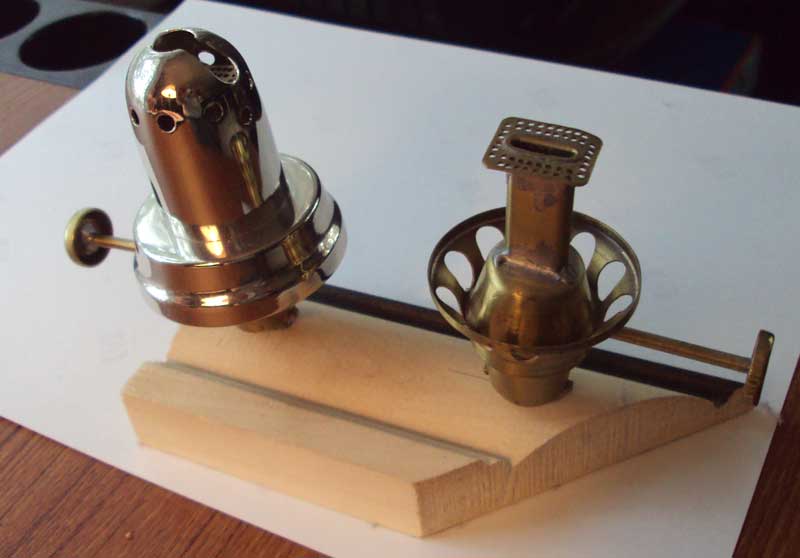 some of the mandrels for forming the brass.

After hanging around resourceful old car nuts for 50 years, I've learned there is almost nothing you can't make for your car.
A couple of years ago I needed some burners for some E&J oil lamps I was restoring. Rather than spend the 85$ a pop (then) and since I thought I needed 5, I deceided to try to make some. I found the overflow tube in the toilet was almost the right size for the upper part of the cover. I swaged a tapered plug down the inside to make it the right diameter.
The lower part of the cover I made out of shim stock and spun over a form. Soldered them together and had them nickle plated. The only noticable difference from the original is a seam.

It took about 5 weeks to build them, so buying reporo's would have been smarter, but I don't learn much when I buy stuff.
My old boss once told me "There's nothing the experts can do that I can't do. It may just take me a little longer and not look as nice."

overflow tube in the toilet was almost the right size


What then with your toilet? Borrowing the neighbors?

It's a joyous thing to see that kind of craftsmanship. What a beautiful job!

Some of the craftsmanship and talent displayed on this forum amazes me. Thanks Richard.

I am humbled by your talents. Excellent work.

Michael,
No. The neighbor made a wind chime out of his overflow tube.
Glad you have a sense of humor.
By the way, the brass tubes a hard to find now. Most replacements are made of plastic.
Thank you all for the nice comments. I love to see the parts and work all of you are posting.
Rich

Richard
Can you tell us more about the brass shaping process you used?

Darn... to think of all the toilets I've taken to the dump! Very nice work.

Erich and Les, Here are some more pictures. 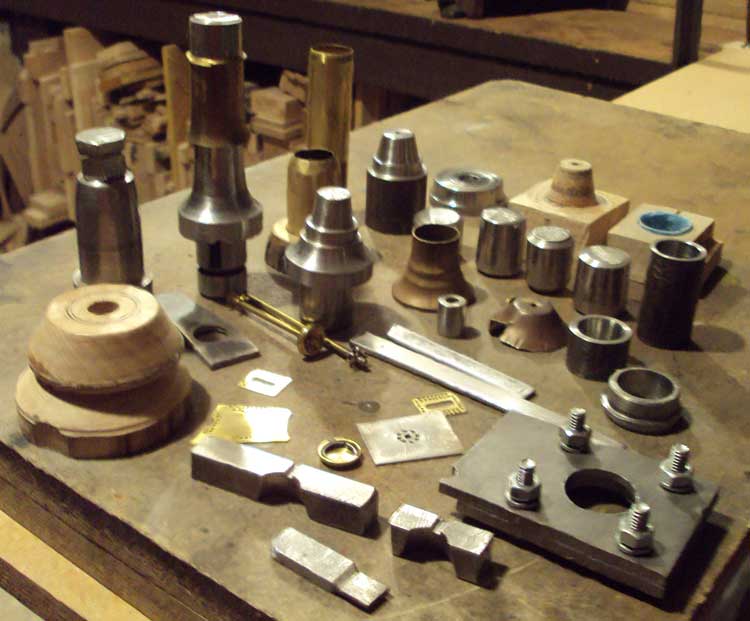 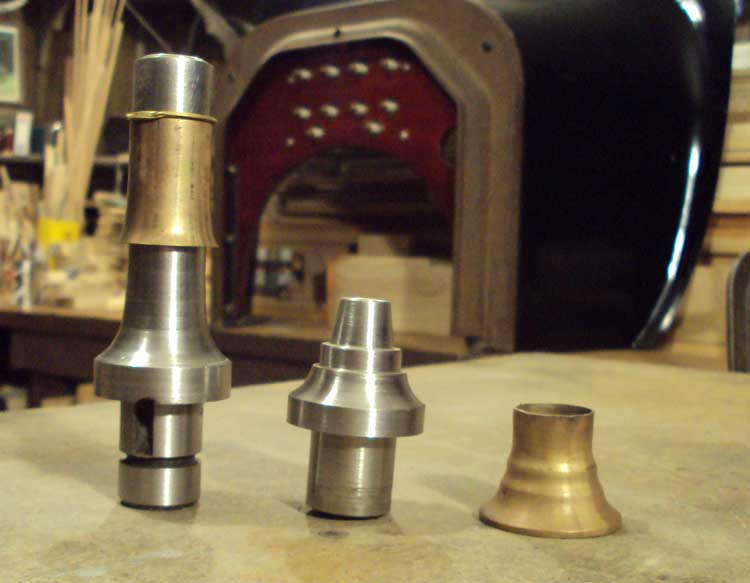 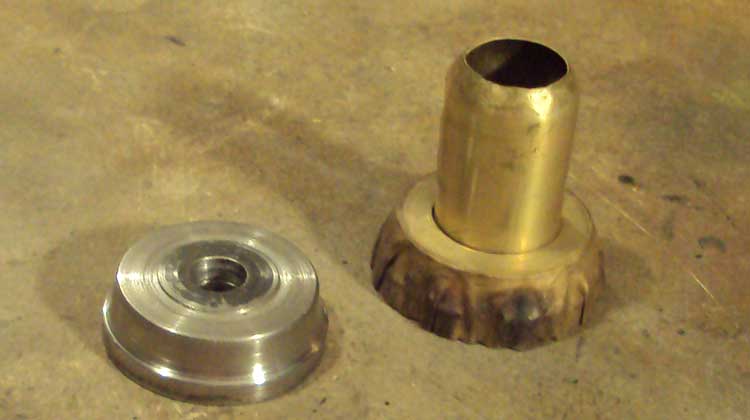 I put off learning to spin brass for a long time because a friend told me he visited a shop where they made headlamps for antique cars and most of the help had missing fingers. Fair warning.
I'm not a expert, but the idea of spinning brass is to force it over a form (I use steel or maple) while it's spinning in a lathe using a big hardwood stick dipped in beeswax. There are some good books out on it. Lindsay Publications had some several years ago. Probably is info on the web now.
One problem is the brass work hardens after a little distortion and has to be annealed. I heat it to a dull red and drop it into a bucket of water and it's ready to spin some more.
Some of the parts you can press into a shape rather than spinning. You still have to anneal it a few times before you get it where you want it. The brass can get pretty ugly before you get there, but a little smoothing and polishing and it looks great.
Thanks for the interest.
Rich

Richard: You have let the genie out. Please show and tell us more!

Jack: not sure what more I could tell you about this project. If you want to try something like this, start with something small. I couldn't find any escutcheon plates for my Tudor, so I made some simple dies and used a 12 ton press. The 4 on the left are original. The 3 at right are new. 22ga. I think. When I got it right I made them out of brass and had them plated. I didn't put in the little tangs that keep it from turning but they work fine with out them. I learn a lot from small projects and then tackle something bigger.
I guess you have to be a little funny in the head too. Today I was remembering my junior high shop teacher telling me "Bob, your brain just dosen't work like other people's."
Bob is my brother who took his class 5 years earlier. I guess I don't mind my brain not working like other people's.
Rich 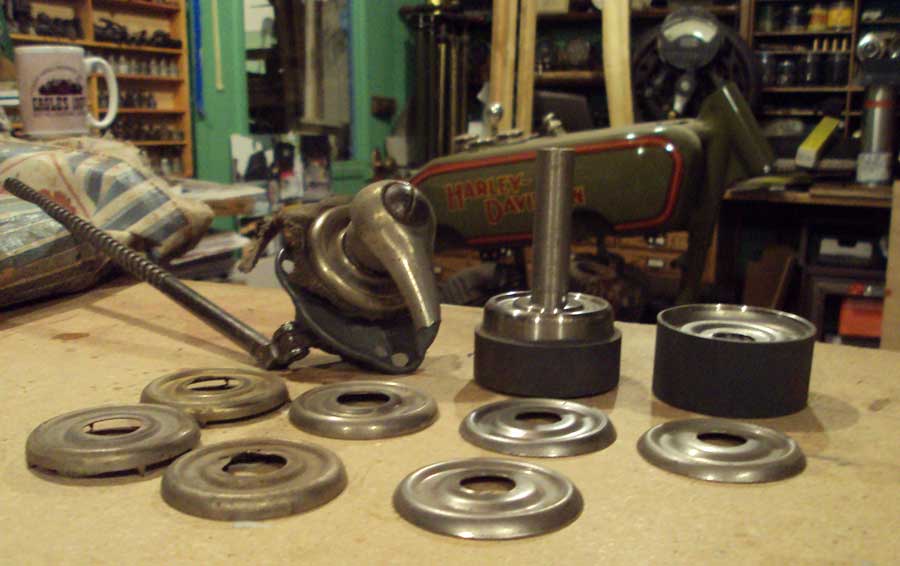 P.S. the two pieces at the back at right (one with the shaft in it) are the dies that form the plates.
Rich