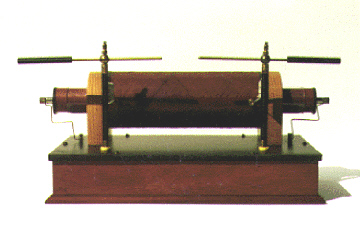 This Ruhmkorff Coil looks like a Ford Coil with no box covering. Has it ever been mentioned that Henry Ford borrowed the idea from Heinrich Daniel Ruhmkorff? The patent must have been expired anyway.

From Wikipedia, the free encyclopedia

Heinrich Daniel Ruhmkorff (January 15, 1803 in Hanover – December 20, 1877 in Paris) was a German instrument maker who commercialized the induction coil (often referred to as the Ruhmkorff coil.)

Ruhmkorff was born in Hanover. After an apprenticeship with a German mechanic he moved to England. Biographies say that he worked with the inventor Joseph Bramah, but this is unlikely since Bramah died in 1814. He may, though, have worked for the Bramah company. In 1855 he set up a shop in Paris, where he gained a reputation for the high quality of his electrical apparatus.

Although Ruhmkorff is often credited with the invention of the induction coil, it was in fact invented by Nicholas Callan in 1836. Ruhmkorff's first coil, which he patented in 1851, utilized long windings of copper wire to achieve a spark of approximately 2 inches (50 mm) in length. In 1857, after examining a greatly improved version made by an American inventor, Edward Samuel Ritchie, Ruhmkorff improved his design (as did other engineers), using glass insulation and other innovations to allow the production of sparks more than 30 centimeters long. Ruhmkorff patented the first version of his induction coil in 1851, and its success was such that in 1858 he was awarded a 50,000-franc prize by Napoleon III for the most important discovery in the application of electricity. He died in Paris in 1877.

Henry Ford, nor any of his employees, by no means, invented the induction coil. It was in use before Ford even began and was used by countless other auto producers and statioanry engine manufacturers.

Ruhmkorff coils were also the basis of spark gap radio transmitters used in the early part of the 20th century prior to widespread use of vaccuum tubes. They were only suitable for morse code transmissions, and provide a 'dirty' signal that radiates on more than just the intended frequency. Thus they were banned, but did remain on some ships for emergency use into the 1930's.
Many a radio amateur adapted Ford coils for the same purpose in the early days.

Don't forget their use providing voltage for discharge tubes, and consequently the discovery of Xrays. Often a lab's prominence was measured by the length of spark their coil could make, and the size of their batteries.

A famous photo of a page from Ford's notebook, supposedly from around 1907, when the T was being planned, shows the plain Ford notation "Rumcorf coil" (sic) and "Modle T" (sic) along with other semi-cryptic phrases. Most likely, at the time, it referred to a type of induction coil rather than a specific make. Ford was probably indicating that he planned to continue the use of that type of coil in his new car.