Illustrated here are partial reproductions and the dates of blueprints showing modifications in Ford’s Model T hubcaps. The dates shown are of the change in the blueprint, not the dates when the change in production was made, but may offer a clue as to the approximate era. Judging from other blueprint dates, some drawings were made after the part was modified; some were made before, and some parts for which blueprints exist were never made.

Sketch of the general shape of the 1908-1911 hubcap. Note the domed top surface and the lack of fluting at the base of the octagon-shaped top. The “Ford” on the top was in block letters pn the 1909 and 1910 caps.

The blueprint dated September 12, 1910 shows the standard “Ford” script instead of the block letters. The overall shape of the cap is identical to the earlier type. This is the typical 1911 style hubcap.

July 13, 1911 The top surface is now flat with a thin rim around the outer edge (the name area is recessed) with the standard “Ford” script. The background is oxidized. This style is typical of late 1911 and most of 1912.

April 16, 1912 “Made in U.S.A.” appears below the Ford script. The “F” in Ford is higher than the standard script. “Ford” is embossed but the “Made in USA” is stamped. The background is oxidized.

May 13, 1912 Similar to the above except that the “Made in U.S.A.” is now embossed. (The stamped version may have never been produced.)

May 7, 1914 Similar to the May 1912 but the background is now black enamel instead of oxidized. 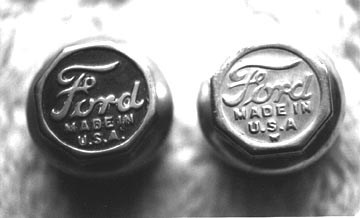 The July 15, 1914 blueprint shows the scalloped appearance at the junction of the octagon top and the round body of the cap. This style continued until the end of production (on wooden wheels).

July 15, 1914 While appearing similar to the earlier design, the octagon top now appears recessed into the round cap, with a “scalloped” appearance when viewed from the side. By this time, too, the “F” in “Ford” is typical of the usual style.

The October 11, 1921 blueprint indicates a new design. The script area is smaller, with a wider border. This style was typical until the end of production.

The October 1921 blueprint shows the shape of the top which now has a recessed area on the underside around the outer edge.

October 11, 1921 The circular area on the top is smaller; just large enough to clear the Ford script, giving a wider rim around the top. Again made of brass, they are nickel plated. The height of the octagon area is increased to 3/8-inch (from 5/16 inch) but apparently returns to the 5/16-inch height in production since all later drawings show the 5/16-inch dimension.

December 20, 1926 Similar to 1921 but again made of brass and nickel plated. While the overall dimensions remained the same, the thickness of the cap material varied over the years.

1926-27 WIRE WHEEL HUBCAPS While of an entirely different shape, the Ford logo and the “Made in USA” are in the same pattern as the later wood-wheel caps. The wire wheel caps were first drawn in 1924 and were modified several times before actual production in late 1925 (for the 1926 models). PLEASE NOTE

The dates shown here are the dates of the blueprints and are NOT the actual dates of use. Dates of use could have been earlier or later, but these dates are at least an indication as to the approximate dates of change.

Note, too, that the “Ford” script shown in these illustrations is not necessarily a duplicate of the actual script found on a real hubcap. For example, the high “F” in the 1913 caps continued until at least 1917 in caps supplied on one manufacturer. (Ford did not make hubcaps; they were made by other firms.) The 1917 “Rip Van Winkle” Ford had caps with the high “F” on one side and the “1921-style” caps on the other, and this was an original, unrestored, car.