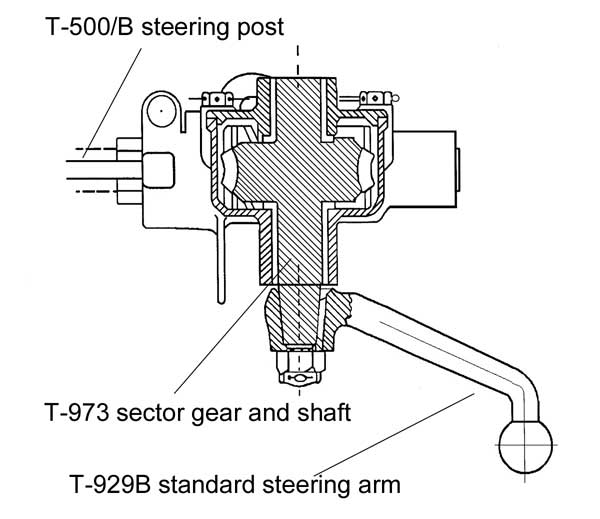 Side cutaway view of the worm steering gear assembly. The steering arm is at the bottom; the arm moves horizontally. The standard drag link is used but with the ball socket turned upward. 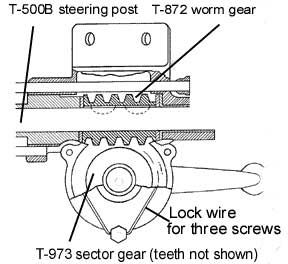 Top View of the worm steering gear. Note the position of the steering arm which moves in a near horizontal plane instead of the normal near vertical plane.

The teeth on the sector gear are not shown. The sector gear cover was held with three screws which were locked with a retaining wire as shown. 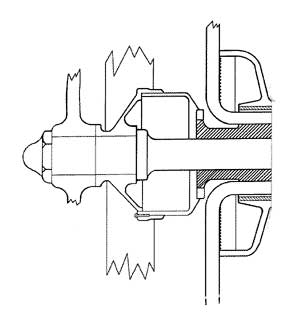 Over the years in our research at the Ford Archives, and in literature we have collected, we have found many references to “worm steering gear.” The factory numbers were, for the most part, in the T-900’s but we could find no reference to part numbers, nor to what or when this type of steering gear might have been used. We presumed these were just “experimental.” Worm-gear steering on the Model T? It really happened, and not for an experiment either.

The first design of this system appeared in 1910, and specified for 1911 cars. Modifications were made at least until 1920, according to the original blueprints from which these illustrations are copied. The initial design had a ratio of 5:1 but within the first year this was changed to 7:1, perhaps to reduce the tendency for the wheels to effect the steering wheel when some obstruction was met on the road. Factory shipping records indicate that a Town Car, serial number 48,955, which had “worm steering gear” noted on the record, was shipped to Germany on April 21, 1911. Perhaps this type of steering gear was required in Germany.

Cars shipped to Germany apparently also had to be supplied with rear wheel brakes which could be operated by the foot pedal. Ford made a cable setup which connected the pedal to the rear brakes just for the German market.

Following are a few notes found at the Ford Archives regarding the worm steering gear. These are not necessarily all the notes on file; just the ones we noted.

DEC 15, 1910Acc. 575
T-972 worm, and T-973 sector steering parts. Blueprints indicate that these parts were never used but the worm gear assembly apparently was used until at least the early 1920’s. Probably the part numbers were changed; we do know that the original sector gear was just a sector but that it was replaced with a full round gear 1911. The left-hand engine pan (T-2367) was also designed for this type steering.

MAR 16, 1911(Factory Letter 284)
T-991 “Changed name from steering worm sector to steering worm wheel. Have also specified this piece to be a complete wheel instead of only a sector, thereby allowing the wheel to be turned around from one side to the other as the teeth become worn out. This will allow one piece to be used twice as long as before.”

BRAKE CABLES ON THE MODEL T

As with the worm steering gear, numerous references were found to brake cables. It seems that those cars shipped to Germany were equipped with cables to the rear brakes instead of the usual brake rods. The rear brake arm clevis was designed to accept and clamp to the cable. It was designed to fit the standard brake arm and was angled so that the cable had a direct pull to the front brake lever arm. The clevis at the front brake arms had pulleys. Since the records show only one cable per car, we presume the cable passed over this pulley and across the frame to the other pulley and then back to the opposite rear wheel. Such an arrangement would tend to equalize the brake action. On the other hand, the records indicate there were four cable clamps required per car. Did they use two clamps at each end, or was the cable arranged so that instead of crossing the chassis, as above, it went through the front pulley and then back to some point on the chassis where it was anchored? This would give a mechanical advantage of two-to-one. (We presume the cable, listed as fourteen feet long, would have been cut into two pieces.) Perhaps the Germans required a more effective rear brake than the standard arrangement provided.

Following are some of the notes regarding the cable brake system.