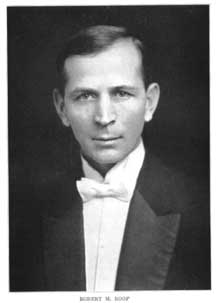 Born in 1882, in New Castle, IN, Roof became a machinist apprentice at the age of 17 and a member of the Society of Automotive Engineers in 1919. His career spanned five decades, primarily spent designing and producing Speed Equipment. From 1911 to 1949, Roof was granted twelve US Patents; eight were Model T speed items.

As the Chief Engineer for Laurel Motors, Roof not only designed the Laurel Speedster, but also the famous Roof Racing Overheads. Roof Type A 16-valve heads owned the dirt tracks in the teens. Followed in 1918 with the Type B Head and soon atter with Type BB. The awesome Type C 16-valve came out in 1923, followed very shortly by 8-valve cross flow heads, both of which became available in overhead cam versions in the mid-twenties. Even the famous Frank Lockhart drove a Type C overhead cam car to victory in Indiana in 1926.

R&R Manufacturing was formed in 1925 as a partnership with Myron B Reynolds. By 1929 Roof held sole ownership. Ken Gross, Flathead Ford V8 Historian, credits Roof with producing the first dual carb intake for the Ford V8. Roof also produced speed equipment for the Model A and V8 Ford, Dodge Fours, Chevrolet Sixes, and was producing racing engines for Flathead V8 and boat racing when he died in 1949.

Robert Roof’s legacy was his ability to change as racing evolved through his five decades of manufacturing racing equipment. There is no doubt he enjoyed his profession. His enthusiasm is expressed by his own comment shortly before his death: “It’s a thrilling life. Everything’s interesting, and there’s something new every day.” 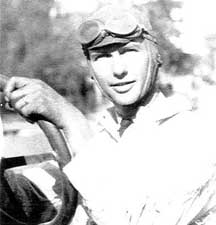 Noel E. Bullock, born March 31,1899 in Franklin, Nebraska, began his racing career in 1918. He built his own bob-tail racer and immediately started winning races on the dirt tracks of the area. In 1919 his father helped him purchase a Curtis Jenny Biplane and Reed Davis taught him to fly.

They formed the North Platte Aircraft Company and performed the aerial programs. In the early 1920s, Bullock, with his Rajo Ford Special, won at least 80 races in the Midwest and in 1922, the “Kid” froom Nebraska beat the best by winning the Pikes Peak Hill Climb in hi own creation.

Bullock moved to Los Angeles, California after the 1924 racing season where he formed an automotive parts and machine shop; he continued to race at Banning, Legion Ascot and other California tracks. Bullock was also a firm believer in commercial aviation and had a contract with an air service to fly mail and passengers daily between La Paz, California and Mazatlan, Mexico. On December 22, 1934 the plane he was piloting was forced to make an emergency landing in the ocean. He and six others perished. 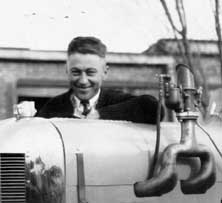 Dean and elder statesmen of Mid-America dirt track auto racing, Leonard Kerbs was born on December 22, 1895, in Otis, KS. The Kerbs Machine Shop provided resources to support a highly successful dirt track racing career starting with an Indian Motorcycle in 1914 and then a bob-tailed flathead Model T Ford in 1915.

Kerbs used a Robert Roof 16-valve rocker arm head until 1921 when he, with his machinist John Schober and cousin Benny Kerbs, converted two Craig Hunt heads to Dual Overhead Cam arrangement, and thus made history during the 1921 season with the first DOC Ford engines ever raced.

In 1922 “The Kansas Cyclone” switched to Frontenac overhead valve heads and Kerbs made his mark on dirt track racing throughout the Great Plains and Rocky Mountain regions with the Kerbs Specials. Perhaps his finest year was 1923, winning many races on tracks ranging from half-mile to two miles with features from ten to 100 miles long. Many of these races were head-to-head, winner-take-all contests with his loyal friend and fierce competitor Noel Bullock. By 1930, the Kerbs Specials had won about every trophy offered in the Central US.

With the birth of his son “Buddy”, Kerbs hung up his helmet and became a car builder and owner. The K-1 specials now featured the famous Frontenac 16-valve DOC heads created by Arthur Chevrolet. First Sam Hoffman and then Pat Cunningham drove for Kerbs until 1935 when the Kerbs Specials were sold to Jack Keys of Dallas, TX. Kerbs continued his association with dirt track racing at the famed High Banks Track in Belleville, KS, as flagman and other activities until his death in 1960. 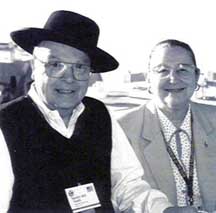 Presented in grateful recognition and appreciation to Bill and Joyce Smith for providing the lifestyle pattern for the “American Dream”. Their legacy includes five decades of providing the Speed community with the very best in machines and equipment for race cars, street machines, and children’s pedal cars. Providing vintage speed parts and antique automobile parts, perhaps most notably the authentic Model T Ford brass windshields, has made Speedway Motors a prominent icon for Speedsters across the country.

“Speedy Bill” Smith, a “man on a passionate mission”, is singularly dedicated to preserving the rich history of the golden era of American Racing with the Smith Collection Museum. Called the “Holy Grail of Speedsterdom”, future generations will be forever grateful for this wonderful “National Treasure”. Bill and Joyce have worked for over fifty years putting together this magnificant collection; and folks, “they’re not done yet.” The Model T Ford Club of America initiates their Speedster and Race Hall of Fame program on August 1, 2005. We take great pride in presenting this very first Inaugural Hall of Fame Membership to Bill and Joyce Smith. 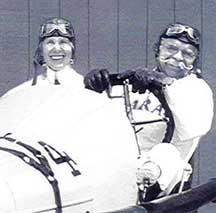 Born 50 years too late, Ed and Karen have a romantic infatuation for the Model T Ford, Speedsters, Race Cars, and this golden era in general. In 1961, at the early age of 21, Ed and Karen built their first Model T Ford Racer, driving it all over California and Nevada until acquiring the car of their dreams; an original 1915 Ford race car with a barely visible #4 on the remains of the hood. With the help of old-time Model T racing expert Vic Sala, the restoration of old #4 was completed in 1968.

Ed says it best, “There is joy and excitement in the challenge of restoring or building a machine that not only performs well, with Karen and me in the cockpit dressed in the appropriate attire, but completes each run successfully. I sincerely believe that we are blessed as the temporary caretakers of a piece of history and that cars should be equipped with components of the era they represent.”

With Ed and Karen on board, Old #4 has competed in many hill climbs and cross country drives such as their famous drive across the Great American Desert in 1974 to “Destination Dearborn” MTFCA National Tour. Old #4 has competed on oval dirt and paved races, closed circuit races, endurance runs, autocrosses, drag races, and Concours de elegance.

Ed once drove a T racer in the Baja 1000, and a T touring car in the infamous Dodge/Ford and Chevrolet/Ford races from San Francisco to Reno. Longing for an event dedicated strictly to his passion, Ed was the prime initiator of the Santa Clara Valley Model T Ford Club 200 mile Endurance Run and Lowland Tour in 1970, which has played host to the largest gathering of 1927 and older Speedsters and race cars in the world! Ed Also founded the Calistoga Classics dirt track races. Ed is past National President of the Model T Ford Club of America. 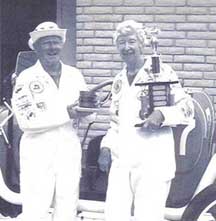 Howard and Dorlyne Genrich have been international ambassadors of good will and spokespersons carrying the Speedster and Racer message for more than 30 years. “Humble” Howard’s Lucky 7 Speedster, is perhaps the most recognizable fast Ford on the planet.

Howard says, “After being installed as president of the Long Beach Model T Club in the fall of 1971, my 12 year old son explained that I needed a Speedster to race in our annual Shell Hill Climb. This would help save the center door for its correct role as a car for all seasons instead of racing. Hence, the “Year of the Speedster” was born. Several of us were competing to meet this 3rd weekend in May event.

My construction almost became a club function especially when a person, unknown to me but knowing of my state-wide search for the rare eight spoke metal wheels, came forward with the location of what became a set of these unknown wheels. Twenty-one years went by before the identity of the manufacturer was known. Now the stage was set for me to attend the Endurance Runs, not only Ed Archer’s but the others that were cloned”.

On the national tours and other functions this car became something of a darling. The trick muffler/exhaust is of my design. As a Speedster, it is an expression of my ability. I was pleased to have strangers explain that they hadn’t thought to build a Speedster until they witnessed how much fun I was always having with this magical machine. Yes, a Speedster is a ‘work in progress’ and a constant source of happiness and pride.

This Racer was one of a three-car team entered in the 1924 Indy 500 by a downtown Indianapolis Ford Dealer, Barber-Warnock. Louis and Arthur Chevrolet were hired to manage car construction while the cars were built by dealership mechanics. On race day the Chevrolet Brothers performed as team managers and the mechanics formed the pit crews. It would be Barber-Warnock’s second to last 500 effort.

The three cars, numbered 26, 27, and 28, were assembled primarily of Ford production parts (75% indicated) plus Frontenac race parts produced by the Chevrolet Manufacturing Company, also from Indianapolis. Fred Harder, a Texas dirt racer, drove #27, with Bill Hunt in #26 and Alfred Moss, father of famous British racer, Sterling Moss, operating #28. All three qualified at similar mid-80 speeds, which translated to 75 mph in the corners and 95 mph on the straights. This was outstanding for basic Ford hardware shared with 15 million other Model T automobiles. All three proved reliable, completing the race, although none achieved the spectacular 5th place finish of the single 1923 BarberWarnock entry. The highest finish of the 1924 cars was 14th. Race car number 27 has been restored by Tom Butterworth and Rick Linder of suburban Detroit. The photo of restored Race Car number 27 in the Indianapolis Speedway’s Pit Lane was provided by Tom Butterworth.