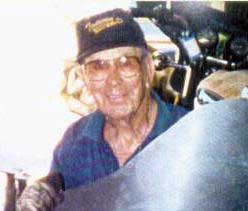 A well-known 1930’s northern California Racecar driver and mechanic, Vic won several first place finishes in the Long Beach Hill Climbs in the 1960’s and 1970’s. Vic drove the early Santa Clara Valley Endurance Runs in his Mercury speedster (restored by Vic in the 1950’s and now resides in the Smith Collection Museum). Later Vic restored another Model T Ford Speedster and continued to run in the Santa Clara Valley event. Vic drove the Calistoga Classic dirt track races in the early and mid-1970’s and in the late 1970’s through the 1990’s, drove in many vintage oval track races in the south-east and mid-west.

Next came the restoration of an American Body Company Speedster loaded with original teens accessories, then a sporty Ames Cloverleaf Ford, followed by a one-man Racer found on Mission Street in San Francisco. Vic next built up a few more Speedsters from parts; then acquired an authentic Paco staggered seated Speedster from Chuck Davis; a close friend from the mid-west who caught the fever from Vic, and specialized in Miller Racers. Vic’s Paco also now resides in the Smith Collection Museum.

In 2005, when he was 91 years young, he was working on another Model T Ford Speedster for a good friend. Vic says this will be his last, but we’re not convinced. Vic says, “If I finish this car, I will have restored a total of 16 cars; two Model A’s; one Racer, one Sportster, and 14 Model T Speedsters, all different in looks and body styles. I have rebuilt about 10 complete Racing engines. The Paco and the Cloverleaf were rusted and bent and I made them complete Speedsters and Racers that could be driven out of my garage. Vic passed away in March of 2011 at the age of 96. 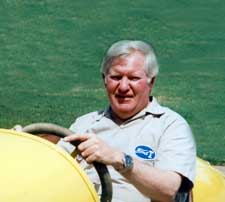 Larry Sigworth has owned Model T Ford Speedsters and promoted the Speedster Hobby for over 36 years. He began collecting speed parts and literature about 1970. Finally, in 1991, he completed the historically accurate restoration of his beautiful 1922 Paco bodied, Frontenac-powered Speedster. He is nearing completion on a very rare, first year production, 1915 Paco bodied, Roof powered Speedster noted for its unique cowl side air scoops. Larry has original history on both cars, particularly the 1915.

Larry is a premier Speedster historian. After conducting over 25 years of research he has nearly completed a magnificent 600 page unpublished book on Model T Ford Speedsters. Excerpts from this outstanding effort have been published primarily in the Vintage Ford and Secrets of Speed magazines and are partially available on CD. Larry kindly and generously shares his materials and knowledge to all who ask.

Larry served as Program Director at the 2005 Speedster Reunion generously providing materials for most of the event presentations. Larry was heavily involved in the five year Tulsa Chapter Cam Project that resulted in the now universally accepted standard, “Stipe Cams”. Larry donated and ran the computer simulation software used in the project. Larry has also participated in the Tulsa Hill Climb, the 1995 MTFCI Kansas City Speedster Meet, the Best Cars in Oklahoma Car Shows, and numerous other regional and local events. Larry’s wife Bobbi has amazingly tolerated his passion for speedsters and has supported his efforts. 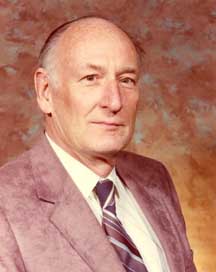 Universally honored and acclaimed, Bruce McCalley is the godfather of the Model T Ford world. An eloquent spokesman and writer, Bruce was the primary co-founder of the Model T Ford Club of America and founding editor of the Vintage Ford magazine, retiring as editor in 1990. He was also involved in running the website for many years and developed the membership database that is still being used.

Bruce authored and published the first substantive information on the authentic Model T Ford starting with a series of Model year articles, later authoring a series of books on the Model T Ford, each evolving with more & better content, eventually culminating with the universally recognized Model T Ford “bible,” Model T Ford, The Car that Changed the World.

Less well known perhaps, were Bruce’s contributions to the Model T Ford speedster and racer hobby. From the beginning, Bruce published articles in the Vintage Ford magazine dealing with speedsters and racers including coverage of the Shell Hill climbs in California, the Chandler Park hill climbs in Oklahoma, the Montana 500, other hill climbs, endurance runs, individual restorations, authentic racing equipment, eventually dedicating primary coverage of an annual issue to speedsters and racers.

Prior to Bruce’s efforts in the Vintage Ford, the passage of time had all but erased knowledge of that period of intense activity of the Model T Ford speedster and racer. We believe coverage provided by Bruce in the Vintage Ford magazine served to “kick-start” this most interesting and historically significant segment of the Model T Ford hobby. Bruce passed away in February of 2012 at the age of 86, we shall be forever grateful. 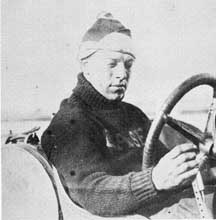 Born in Vienna, Austria in 1884. After high school he joined Mercedes as an engineering apprentice, later was a demonstrator and public relations in Stuttgart. Joe began racing in France in 1897, and after driving several premier races in Europe, he immigrated to the U.S. in 1903. Shown here driving Case number 8 in the 1911 Indy 500; a racing accident ended his brilliant auto and boat racing career later in 1911. The RAJO Manufacturing Company (RAcine, JOe) was formed in 1914 in Racine, Wisconsin. Joe’s connection to Model Ford Speed began in late 1919 with the introduction of the first RAJO head for Model T Fords.

A RAJO Model T Racer was built to promote the new cylinder head; weighing only 950 pounds with an aluminum body, wire wheels and high-tension magneto, the Racer had very successful 1920 and 1921 racing seasons. RAJO overhead design evolved rapidly during the 1920’s; an early cross flow won at Pikes Peak in 1922, followed by the mighty B’s and BB’s, and in the late 1920’s a few Dual Overhead Cam heads were produced. Perhaps as many as four thousand RAJO cylinder heads were built for Model T Ford Racers, Speedsters, trucks and Cars.

RAJO produced cylinder heads for the Model A Ford and in 1949 produced a cylinder head for the six-cylinder Chevy engine. Notable RAJO victories include Gene Schultz’s light class win at the 1921 Pikes Peak Hill climb and Noel Bullock’s amazing Pikes Peak Championship victory in 1922. An intense racing rivalry between RAJO and the Chevrolet Brother’s Frontenac Overheads developed in the 1920’s and continued thru 1930’s and 1940’s. 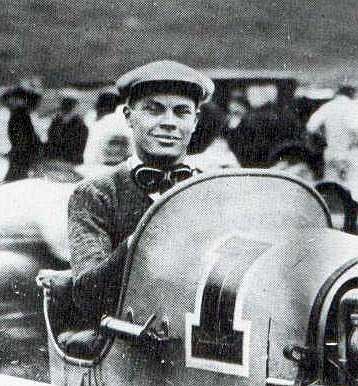 In 1913, Los Angeles was an exciting place to be, especially for Ed Winfield who loved motorcycles and automobiles, and delivered auto parts by bicycle to area dealers and mechanics. Gifted YMCA instructors taught Ed basic mechanics and electricity. Even as a young mechanic at the Flintridge Garage, and later for the Cadillac dealer, all the difficult problems came to Ed.

In 1916 Ed went to work for the famous Harry Miller in the Carburetor Department. Ed gained valuable experience working for Miller, but didn’t care for Miller’s managerial style and moved to Glendale where he designed and sold his own barrel valve racing carburetors and cams. Ed built and raced his first racecar, number 9 in 1921, and later built the number 19 “Kant Skore.”

By the mid-twenties a Winfield carburetor and racing cam was the hot racing setup. By 1927 Ed was the West Coast Champion and drove number “1”. Although Ed’s racecar had “Miller” beauty, it was the famed “2up/2down” flathead engine that beat the great overheads of the day. Ed and his brother Bud designed and built fine racing engines and racecars thru the 1960’s, including the great Indy Novi engine. Ed held the patents on the first fuel injection induction system. Ed was a master consultant, and considered a genius by many. Ed was the complete package, designer, architect, pattern maker, metallurgist, machinist, research engineer, developer and salesman. After 55 years, Ed quit grinding camshafts in 1969, after finishing his last batch of Meyer Drake Offenhauser cams. Ed Winfield died in 1982 at the age of 80, ending the life of a man whose contributions are etched on the pages of racing history. 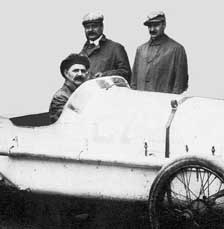 Louis, Arthur and Gaston, were exceptionally talented Racecar designers, builders and drivers. Louis led the way; born in Switzerland in 1878, moved to France in 1886, entered the US in 1901, later followed by brothers Arthur and Gaston. Louis’ achievements are legendary; became famous overnight in 1905 by beating Barney Oldfield; went Buick racing in 1908 and designed and built the first Chevrolet in 1913. That Louis was a superb Race Car driver was demonstrated by his expert preparation and handling of the Cornelian in the 1915 Indy 500.

The Brothers started the Frontenac Motor Corporation in 1913 and won many races in the late teens and eventually culminating in winning the Indy 500 in 1920 and 1921. Gaston was the winning driver in the 1920 Indy 500 but died later in the year while racing the board tracks.

The famous Fronty-Fords were introduced in 1921 starting with the rocker-arm, cross flow Overheads, Models R (Racing), S (Speedster) and T (Truck). These heads were immediately popular and were known for their durability. The twin port Fronty Model SR, introduced in 1922, was immediately victorious both at Indy and on the dirt tracks.

The year 1923 marked the introduction of the most famous Fronty-Ford of them all; the legendary Sixteen valve Dual Overhead Cam. Fronty’s were at Indy in 1922, 1923 and 1924 and other years. Arthur Chevrolet designed the last of the Fronty Fords in 1930 with the famous Model A “Stagger valve”. Fronty’s were a common sight on the dirt tracks in the Thirties and Forties and today are highly prized collector items. 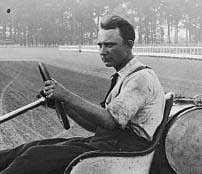 Frank Kulick was one of the five original employees of the Ford Motor Company and was Ford’s number one factory racing driver for a decade beginning in 1904. His first race car engine was two Model A two cylinder engines bolted together to form a flat four that pumped out 20 HP. Named the “Baby Limited” she weighed only 881 pounds, allowing Frank to prove to all doubters the advantages of a favorable power-to-weight ratio. At Empire City Frank was the first to navigate a one-mile dirt track in less than one minute and wound up the 5 mile record in the process.

Frank drove Model T Ford number one in the New York to Seattle transcontinental race of 1909. On the return trip Model T Fords number one and two were the first motorcars to cross Death Valley.

Frank won many races in the 1910 to 1913 era driving special Model T Fords including victories at Brighton Beach, New Orleans and the Algonquin Hill Climb. In 1911, driving a stripped and reworked Model T, Frank Kulick beat Bob Burman’s Blitzen Benz in a one-mile oval speed record run (50 sec. flat) at Detroit Fairgrounds. But when Henry Ford attempted to enter Kulick and the “Super Ford” in the 1913 Indianapolis 500 he was told 1000 pounds would need to be added to qualify, Kulick recalled, “Old Hank told ’em ‘We’re building race cars, not trucks.'” 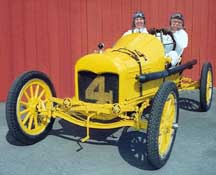 Rescued from a Long Beach back yard in the late 1950s, Racer number 4 was brought to northern California to wait 10 years for caretakers Ed and Karen Archer to discover and fall in love with her. It took about a year, but with the help of Vic Sala, Old number 4 breathed fire again in 1968, and has since roared to a modern record likely more illustrious and diverse than any previously experienced; events such as; Endurance Runs, Hill climbs, Autocross, 1/4, 1/2, 3/4, 1, mile oval tracks, 2-1/4 and 1-3/4 mile closed circuit tracks, 2 visitor laps at speed at the Indy 500, many tours and driving events, several times driving over 5000 miles round trip to attend a 300 or 400 mile tour.