In 1952, when he was 15, Joe bought a Model T coupe equipped with a milled head, sodium filled valves, and dual carburetors. He still has this car. During his senior year in high school in 1956, Joe learned about all the important stuff— old speedsters and speed equipment. He saw a picture of a Mercury bodied speedster built by the Mercury Body Corp. in Louisville, KY from 1921 thru 1926 in one of Dan Post’s articles. It was love at first sight. Since then Joe has dedicated his life to researching, collecting, restoring, and preserving the Mercury speedster body. Over the years, Joe has collected many pieces original Mercury literature, as well as six Mercury speedster bodies. He has since sold four bodies but he still has two with all the special original Mercury equipment.

Joe is one of the hobby’s greatest authorities on Mercury speedsters. He has used that knowledge and skill to complete the 30-year restoration of his 1921 and 1926 Mercury speedsters. In addition, he has helped many other Mercury owners by supplying information as well as many original and reproduction parts. Some of the parts Joe has reproduced include the gas cap, 3 piece windshield, oval deck lid, floor board foot rest, door vents, top supports, radiator supports, large step plates, and small step plates.

Joe also owns an original unrestored Model T dirt track racer known as the Babs Special. It was built, owned and raced by Stanley Babinsky on the East Coast, and features a DO Fronty engine with all the goodies. 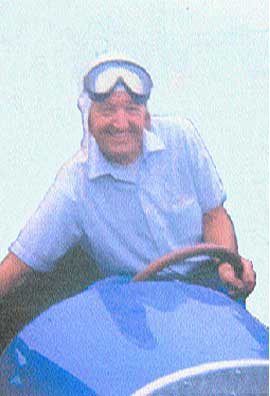 Although Chris Egsgaard made his living working in the movie industry, his passion was the Model T speedster. Chris was an extraordinary collector of racecars and Model T speed equipment. He seemed to know where all the good stuff was, and was able to buy it. He had a large collection that included several Ed Winfield designed and modified engines including a Rajo OHV engine with a Winfield roller tappet camshaft, and the famous 1927 ‘two up and two down’ racing engine.

He often participated in the Shell Hill Climb in Long Beach, CA. Chris built the famous “King of the Hill” crown from a Model T low band with various T parts welded to it. One of his main goals in life was to win that crown. He spent many hours building unlimited class hill climb cars, and finally won the crown in his blue aluminum replica of a Faultless speedster.

He contributed at least three excellent articles to the Vintage Ford magazine covering Winfield carburetors, the Winfield ‘two up and two down’ engine, and Rajo/Gallivan DOHC heads. Chris had the reputation of being a “character”. He sometimes dressed in a beard, long hair, and old coveralls, and called himself “Billy Poobah”. Once at the hill climb he and his bright red haired ‘traveling companion’ drove down Shell Hill in his TT truck with the Fronty Ford racecar loaded on the back. Of course, coming down the hill made a complete shambles of the racing activities much to the delight of the spectators. Billy with his truck and racecar also appeared on the cover of the Vintage Ford magazine. 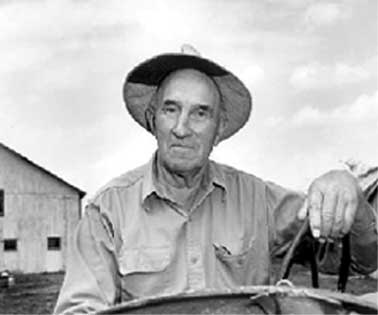 Frank Funk was never behind the wheel of a racecar. He never worked in the garages or served as an owner. Yet, Frank was one of the finest sprint track promoters in the history of American auto racing. His impact on the sport will always be remembered.

In 1916, on the family farm near Winchester, Indiana, Frank began to build an amusement park and a half-mile dirt oval speedway. With some help from such racing notables as Robert Roof, Bill Hunt, and Gaston Chevrolet, Frank learned what it took to make the speedway a success. It evolved until it became the world’s fastest half-mile oval. In the early races, dust was a primary concern. Frank learned that he could oil the track to minimize the dust impact. Frank invested much back into his facilities. His success in promoting racing was based on offering the best competition to the fans while striving for the best course conditions, and purse sizes for the drivers.

Frank eventually either owned or managed six race tracks throughout the Midwest, including Winchester, Jungle Park, and the Dayton Speedway. These tracks attracted such notable drivers as Wilbur Shaw, Howdy Wilcox, Ralph De Palma, Rex Mays, “Wild” Bill Cummings, and a host of others. Frank continued to promote auto racing until his death in 1953. He certainly was a winner. 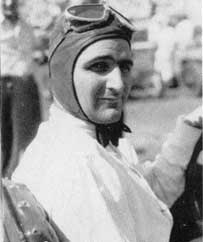 John Gerber was one of the most successful dirt track racecar drivers in the Midwest and Southwest from 1923 through 1937. At one point in 36 starts, he won 28 races, finished second seven times, and suffered one DNF because of tire failure. He was an “independent” who built, owned, and drove his own racecar with very little outside sponsorship. He was one of the most innovative racecar designers and builders of the era.

He began his racing career in 1921 with a speedster he built from a 490 Chevrolet. He immediately began winning races with the speedster. For the 1922 season, he discarded the speedster body and converted the speedster into a “bobtailed” dirt track racer. By making continuous improvements, he was able to keep the racer competitive throughout the 1922, 1923, and 1924 racing seasons. During the winter of 1924-25, he built a new racer.

Although his new “Bobtail” racer was called a Chevrolet or a Whippet, most of it was Model T Ford. The chassis was Model T, but the engine was a 490 Chevy block mounted on a Model T crankcase and hogshead. The Chevy crankshaft was adapted to a cut down Model T flywheel and planetary transmission. With the new racer, he won many more races from 1925 thru 1932 when the “Bobtail” was retired and a new more modern racecar was built. The exact number of races John won with this car have not been tabulated, but the number is likely to be over one hundred. 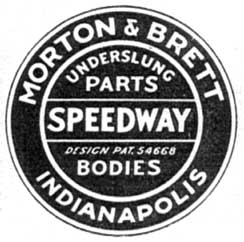 By 1923, Morton & Brett were selling a full line of speed equipment as well as complete road going speedsters and racecars. Their one and two man racecar bodies were runaway sales successes with the racing fraternity throughout the 1920’s and 30’s. Many other companies sold Morton & Brett bodies under their own brand name. There is little doubt that Morton & Brett dominated the racecar body building business during the Model T era and beyond.

About 1925 they introduced the Indianapolis 8 valve, overhead valve cylinder head. It was a cast iron head with four exhaust ports and one intake port on the right side. The intake and exhaust manifold were cast integral with the head. In 1928, they modified this head, and became the first company to market an OHV head for the Model A Ford engine.

From the late 1920’s until 1934 Morton & Brett published their “Blue Book” of speed equipment and racecar parts. This catalog was over thirty pages long and filled with everything required to build a competitive Ford based racecar.

2008 RESTORATION of the YEAR 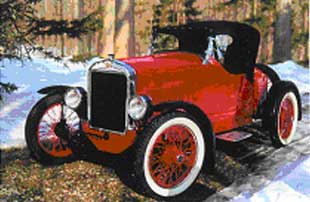 The Mercury Body Corp. in Louisville, KY built the Mercury speedster body from 1921 thru 1926. Joe Michalek has owned Mercury speedster #1155 for thirty years. His Mercury was built in 1926 shortly before body production ended. It has taken most of those thirty years to find all the special Mercury factory parts that were included with the body and complete the restoration.

The car uses a 1926 chassis and engine. Very rare 21-inch Ash wire wheels and lock rings are also used. The engine features a C-35 Rajo cylinder head with a Zenith HP5A side draft carburetor. A Bosch front plate distributor provides ignition. The engine has been balanced and the magnets have been removed from the flywheel. The drive train includes an aluminum Warford transmission and 3 to 1 gears in the rear end. Joe’s Mercury is painted bright red with a black top, black cycle fenders, red wheels, and white wall tires. The car was entered in car shows in Akron and Canton, Ohio in 2007, and received a best in class award at both shows.