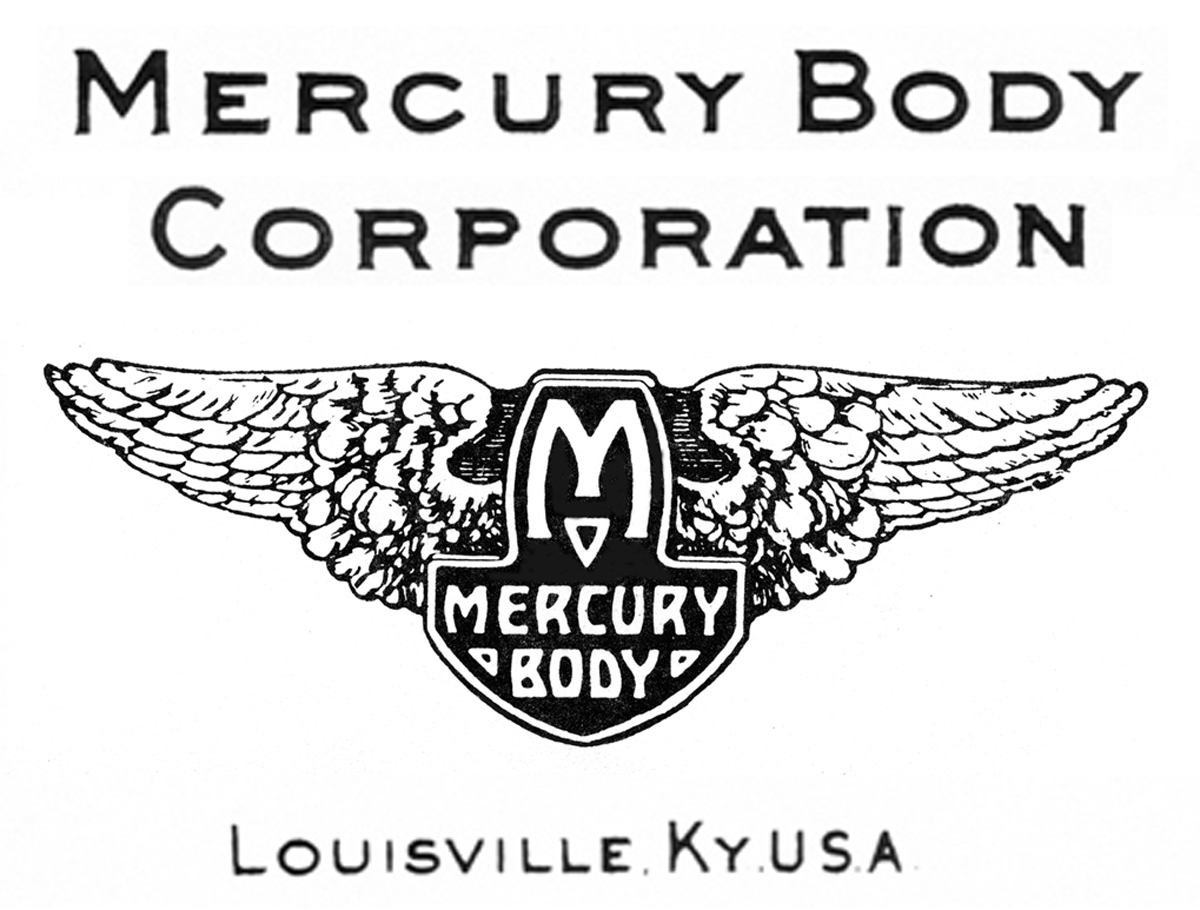 In November of 1920, Charles E. McCormick of Lexington, Kentucky received a patent for a speedster body design. A prototype based upon the patent aroused considerable interest so the Mercury Body Corporation was organized by McCormick, and three of his University of Kentucky fraternity brothers. The firm announced that production would commence on September 1, 1920 in Cincinnati, Ohio. Apparently plans for the Cincinnati plant fell through and in early 1921 a new factory was located in Louisville, Kentucky at 2821 Garfield Ave.

The body was designed for the Ford Model T and the Chevrolet 490 Superior chassis. The original design did not include any doors, but at about serial number 200 a passenger side door was installed in response to customer requests. Also available were cycle fenders, convertible tops, headlamps, windscreens, lowered frame rails, cast aluminum steps and other body-related accessories. The Mercury body featured high quality construction and was one of the first bodies built with stamped steel panels and all welded construction. Mercury’s products were sold either direct or via regional Ford and Chevrolet dealers in the United States and Canada.

Overtime, the demand for Mercury’s Speedster body declined. The firm turned to producing commercial bodies such as a soda bottle-shaped Nu-Grape Soda advertising car. After producing an estimated 1600 bodies the firm was sold and reorganized in 1926 as the Jackson Body Company, but soon after went out of business. 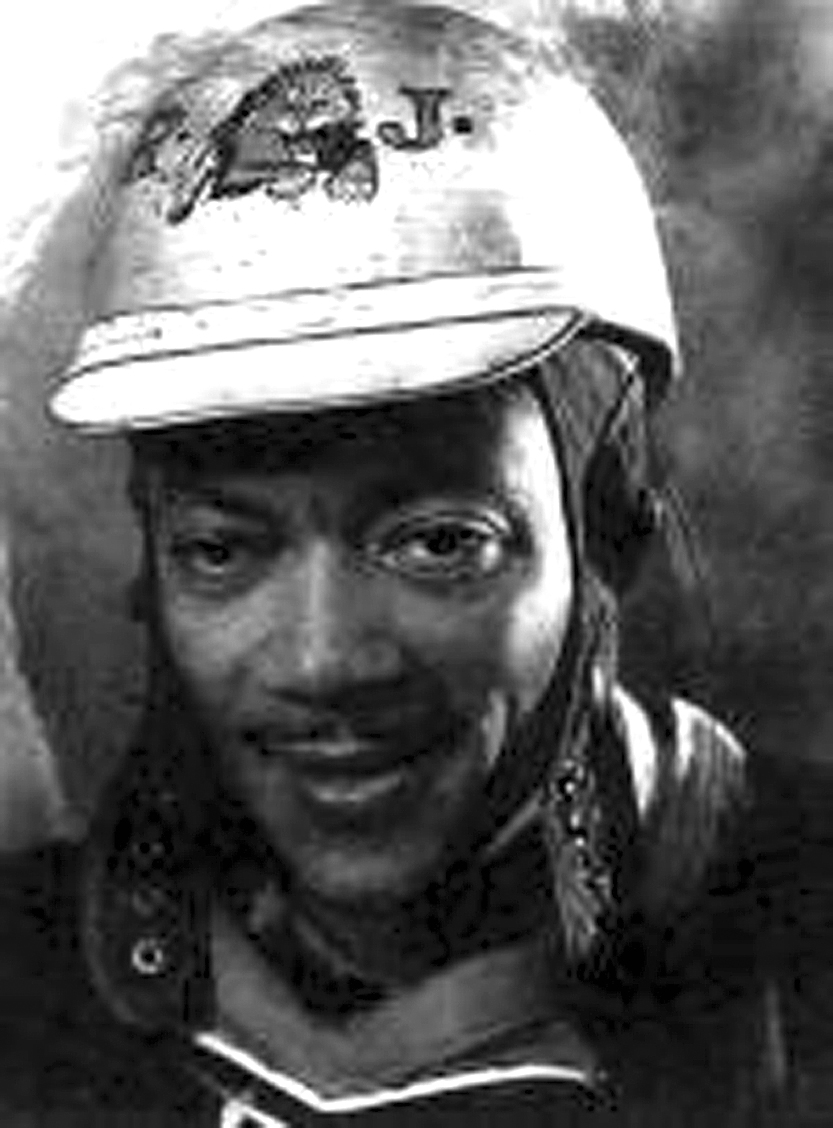 Dewey Gaston, better known as Rajo Jack or Jack DeSoto, was one of the first African American race car drivers. He was born on July 28, 1905 in Tyler, Texas. In about 1919 his family moved to San Francisco, then on to Los Angles.

At age 16 Dewey left home and worked for the Doc Marcell Medicine Show as a roustabout general laborer. Gatson quickly became known for his mechanical talent. He began racing in the early 1920s at the county fairs that the Marcell family followed across the country. He raced under the name “Jack DeSoto”. He later moved down to Pasadena, California, and worked for the Marcell’s until their company failed during the Great Depression.

Dewey built all of his own Model T Ford race cars with Rajo cylinder heads. In the early 1920s, Rajo Mfg. Co. owner Joe Jagersberger named Dewey his Los Angeles dealer and salesman, and the name “Rajo Jack” was born.

Rajo Jack raced in a time of racial prejudice, and he was frequently a target of racism. He was respected among his peers for his talent, so he was generally allowed access to racing circles in spite of his color. He often claimed to be Portuguese or Native American to get around the color barrier.

He won races up and down the West Coast of the United States in stock cars, midgets, big cars and motorcycles. After the Model T era Rajo Jack successfully raced in many forms of motorsport, and used many kinds of engines and chassis including Millers. 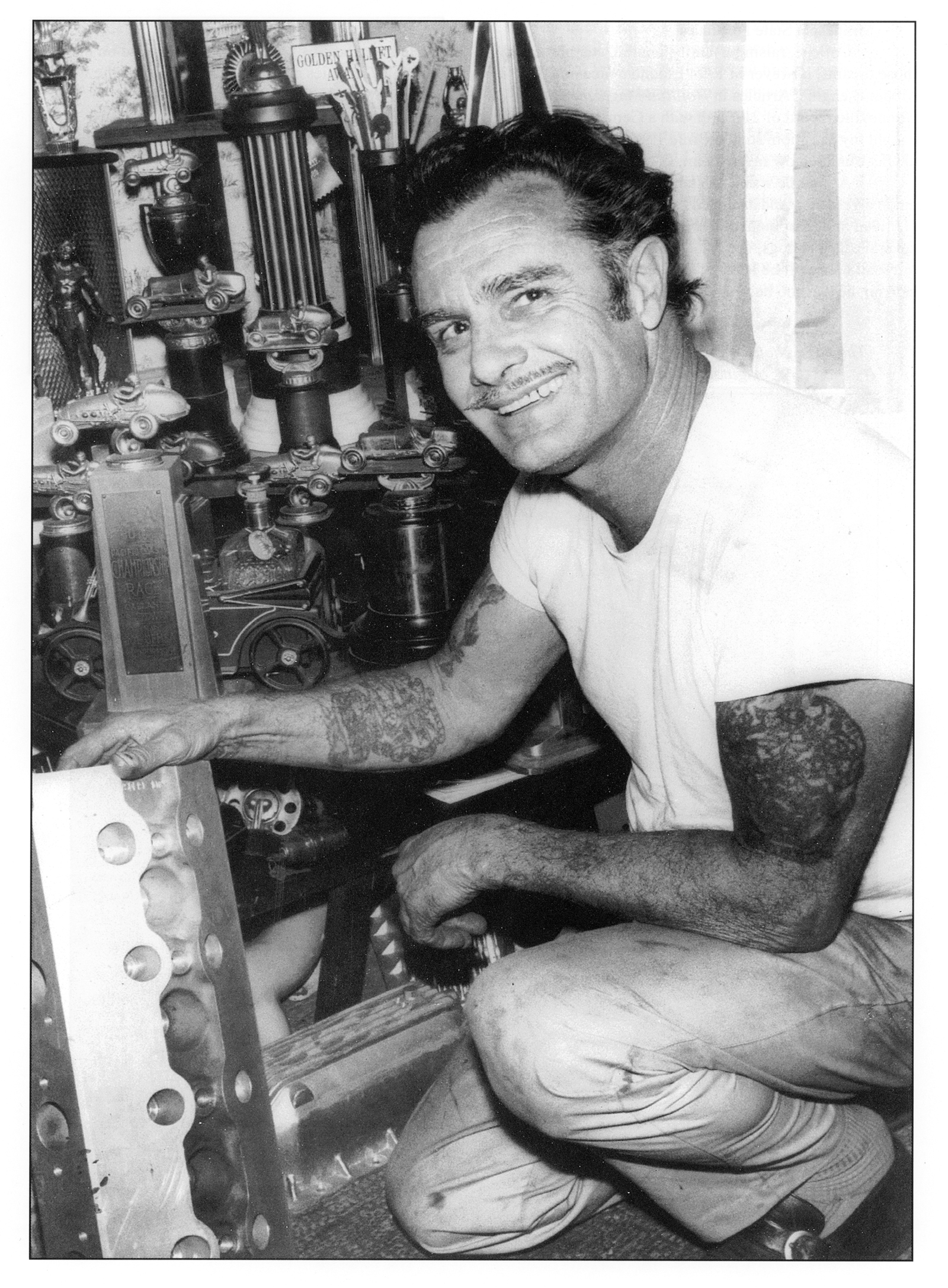 Joe Gemsa was a champion sprint driver in the 1940s and 1950s, and also built and raced cars in NASCAR. When racing technology made the Model T, A and B Ford four bangers obsolete Joe never gave up his devotion to them. Throughout the 1950’s, 60’s, 70’s, 80’s and 90’s Joe designed, built, rebuilt, and restored overhead valve and overhead cam units for Model T and A-B Fords. In addition, Joe designed and built many other speed parts such as magneto drives, distributor drives, oil pump drives, and oil sumps for Model T and A-B engines.

Joe Gemsa was a master machinist who was one of the best at pulling maximum performance out of four-bangers with his custom built single and dual-overhead cam cylinder head conversions. Gemsa built engines and parts in a 20-foot refrigerated railcar converted into a workshop located behind his house in El Monte, California. At the end of the workshop he had a small lathe. He made everything on that lathe, pistons, rods, cranks, everything. He had a drill press, his work table, a tiny mill, and a welder. That was his entire shop. His mill work was incredible. It’s been said that he could weld cardboard to tinfoil. Many people have stories about how amazing it was to watch him work.

When Joe died in 1995 it is believed that he had built a hundred plus cylinder head conversions for the Ford T, A and B four bangers. 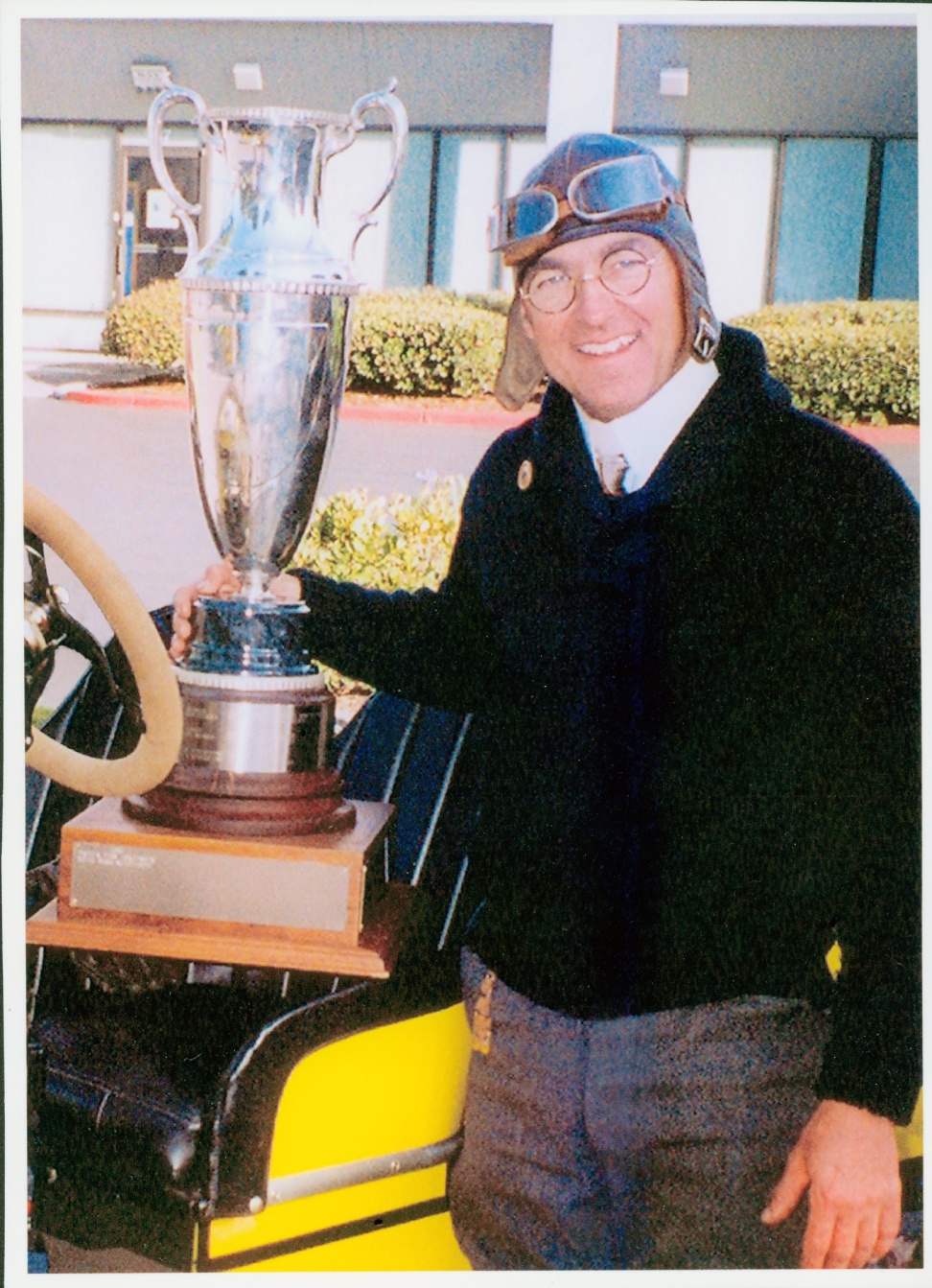 Dan Erceg began building his first Model T speedster in 1968 at age 15. He finished the car in 1971, christened it #19, and joined the Santa Clara Valley Model T Ford Club. He attended the very first endurance run in 1970 riding his old bicycle dressed in period attire. After finishing his 1919 Ford racecar he began participated in the endurance runs with #19, and became deeply involved in the production of the runs. His most noteworthy involvement was his “action” artwork used through the years in a lot of the promotional stuff, programs, dash plaques, and T-shirts. Dan and car #19 raced in the 1972 Napa County Fairgrounds race, which planted the seed for the Calistoga Dirt Track Classics (1973 – 75) in which he drove # 19 several times. He also served as the official flagman for the Calistoga Classics. Dan also provided the artwork for the now infamous Calistoga Classics T shirts, which are still being produced today.

Dan has used his vast knowledge of early racecars and speedsters to design and build a number of ‘historically correct’ Model T speedsters and racecars. In the 1980s and 90s Dan built, car #13 that was on the cover of the “Vintage Ford Magazine”. He also built three other “to die for” showpiece speedsters that are currently on display at the Bertolotti Collection in San Jose, CA.

In addition, Dan has been involved with mostly the design and some construction work of six more speedsters and racecars. He is currently working on a 1920 Ford speedster.

2010 Restoration of the Year 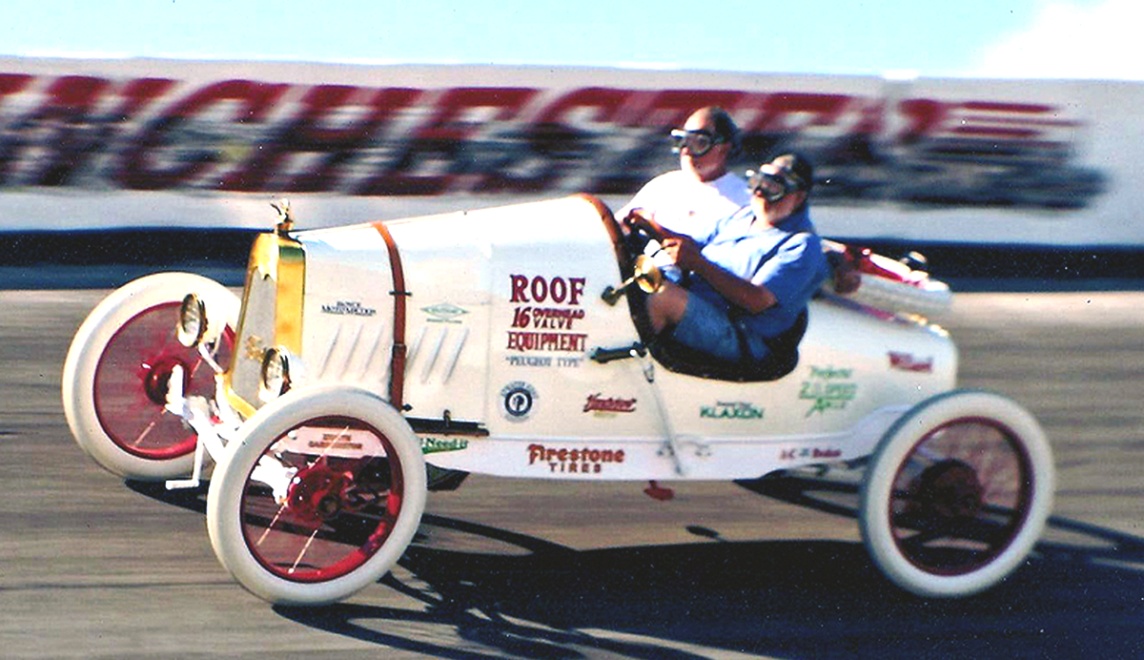 Fred’s ‘Special Deluxe’ Roof Auto Specialty speedster is the only such body known to exist, as the Roof Company became Laurel Motors in mid 1918. The body is the early style using special frame ‘kickups’ to lower the rear. Later Laurel rear brackets ran from the rear radius rods to the rear axle housings. The front of the chassis is lowered about four inches using original Roof front axle brackets with a special “dropped center” front axle providing clearance for the starting crank.

A two-speed Perfecto rear axle with a 3 to 1 ring and pinion and AC external brakes were used along with detachable Detroit Stanweld accessory wire wheels and 30 X 3.5 all white Firestone tires. The 1917 Ford engine features an oversized forged crankshaft with a splash oil system and a Type A Roof 16 valve cylinder head with a rare original exhaust manifold. An updraft Winfield provides carburetion while an Atwater Kent distributor provides the ignition.