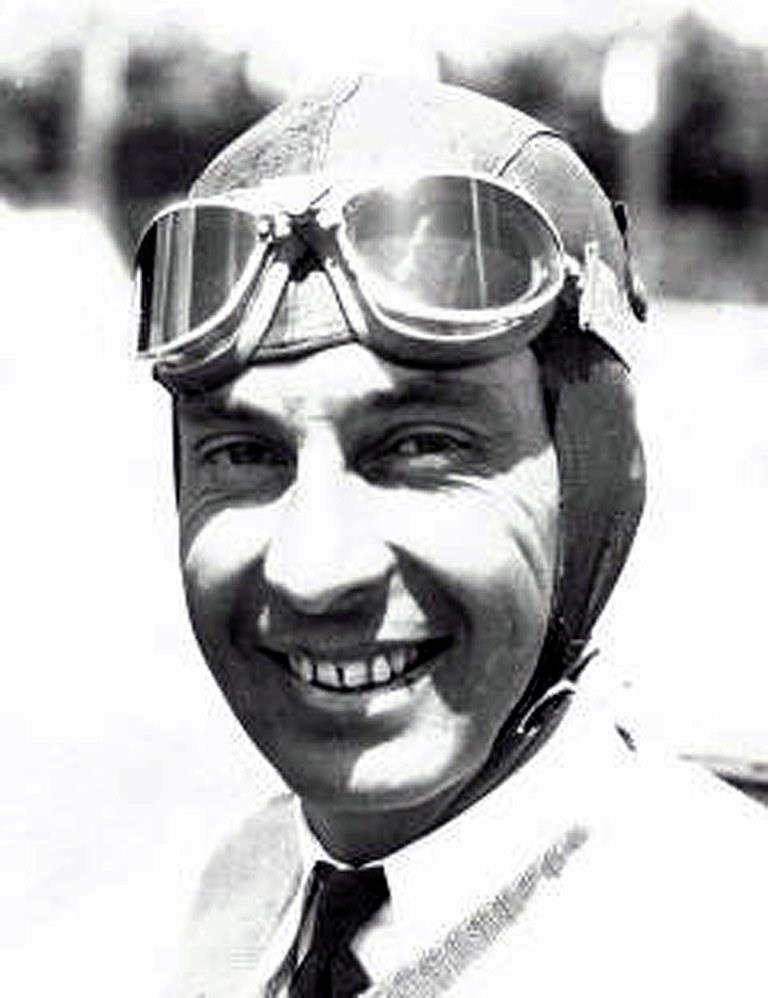 Fred Frame was born in Exeter, NH in 1895.  About 1913 or 14 Fred moved to California to become a part-time gardener and motorcycle expert.  The gardening led to a chauffeur’s job for a wealthy Los Angeles family.

At age 20, Fred drove his first race at the old Ascot Speedway in Los Angeles on Christmas Day 1915 in a stripped-down Model T Ford.  Fred began racing at Ascot in his stripped down Model T with increasing regularity and either was fired or quit his chauffeur’s job.  In 1919, Fred installed a Craig-Hunt SOHC cylinder head on his Model T racer.  Fred’s first race with this engine was at a AAA-sanctioned race at Santa Maria, which is north of Los Angles.  The track was a half-mile dirt oval and Fred qualified in the middle of the front row.  He took the lead on the second turn because both his competitors went through the fence at the first turn.  No one caught him for the rest of the 25-mile race and he won $529.  After this experience, he decided to become a professional driver.  By the early twenties, Frame was an established dirt track ace.

One of the cars Fred drove was the No. 99 Hooker Special.  In 1923, Hooker had Harry Miller design and build a DOHC cylinder head for his Model T based No. 99 Hooker Special.  This may be the fastest Model T racecar ever built and Frame was nearly unbeatable when driving it.  During its early career, this car had a reputation of consistently snapping crankshafts about every seven laps or less.  The problem was finally solved by having special crankshafts made from German steel for about $600 each.

Fred drove the Hooker Special and other Model T racers on most of the fairgrounds dirt tracks from Ascot to the Atlantic Ocean.  He got appearance money and a share of the purse when he won, which was often.  In 1925 or 26 Fred left the Ford camp and began to drive Millers and Duesenberg’s.  He won his first AAA dirt track championship with a victory in 1926 at the 100-miler at Kalamazoo, Mich.  He won the Indy 500 in the Harry Hartz Miller in 1932. 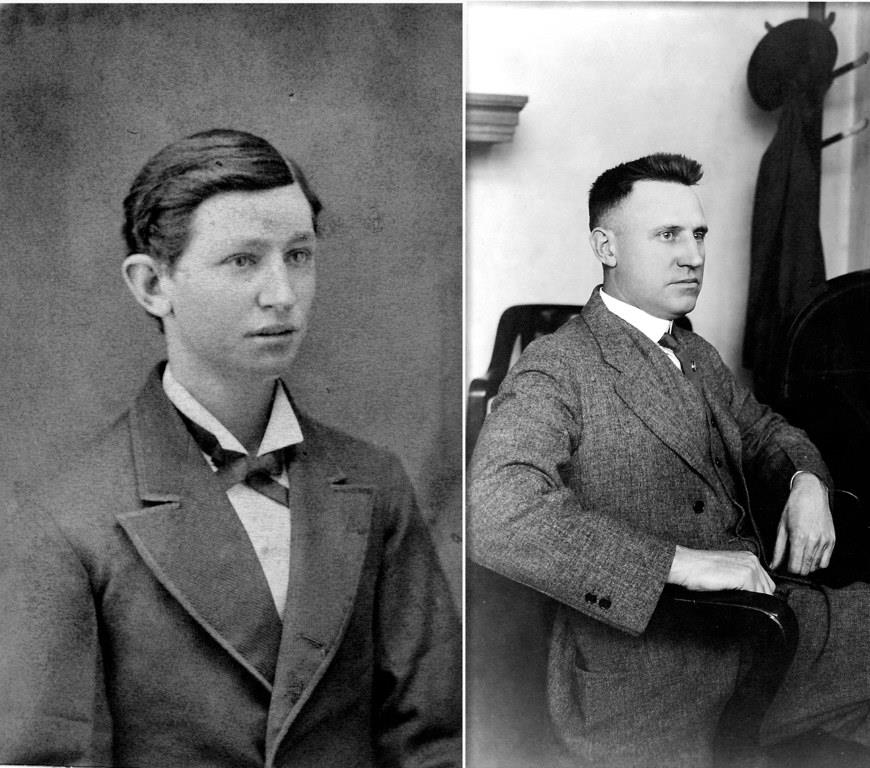 Frank Lynn and Eli Milo Mackemer grew up in Hanna City, Illinois, a western suburb of Peoria. In 1910 the older brother Eli and two friends, organized Mackemer Motor Co. of Peoria, Illinois to repair and sell motor vehicles and appliances.

In 1913 Frank Lynn Mackemer, or Lynn as he preferred to be called, joined his brother at Mackemer Motor Company. Lynn Mackemer was an avid motor racing enthusiast and was a regular spectator at the Creve Coeur Raceway, a small dirt track located just south of Peoria. Since there were no speed equipment shops in Peoria at that time, he and his brother opened the Peoria Accessory Co. to fill the void. Lynn designed a speedster body based on Peugeot’s 1914 Indy racers and called it the PACO. PACO bodies were first advertised in June 1915 and are considered to be the first torpedo-tailed Model-T speedster body to be nationally advertised. The cowl of the PACO speedster body was set back six inches from that of a stock Model T and a correspondingly lengthened hood gave it a noticeably sleek appearance. Included were the hardware needed to lengthen and reposition the steering column, and the pieces needed to modify the foot pedals. A unique feature of the Paco body was the passenger side cut-out, which allowed quick and easy access for both driver and passenger. Also, the driver’s seat was placed six inches ahead of the passenger’s seat, giving the driver more room for steering maneuvers. The stagger seat body was given the Model 21 designation, and a new chisel-tailed racer debuted in late 1916 as the Model 22. 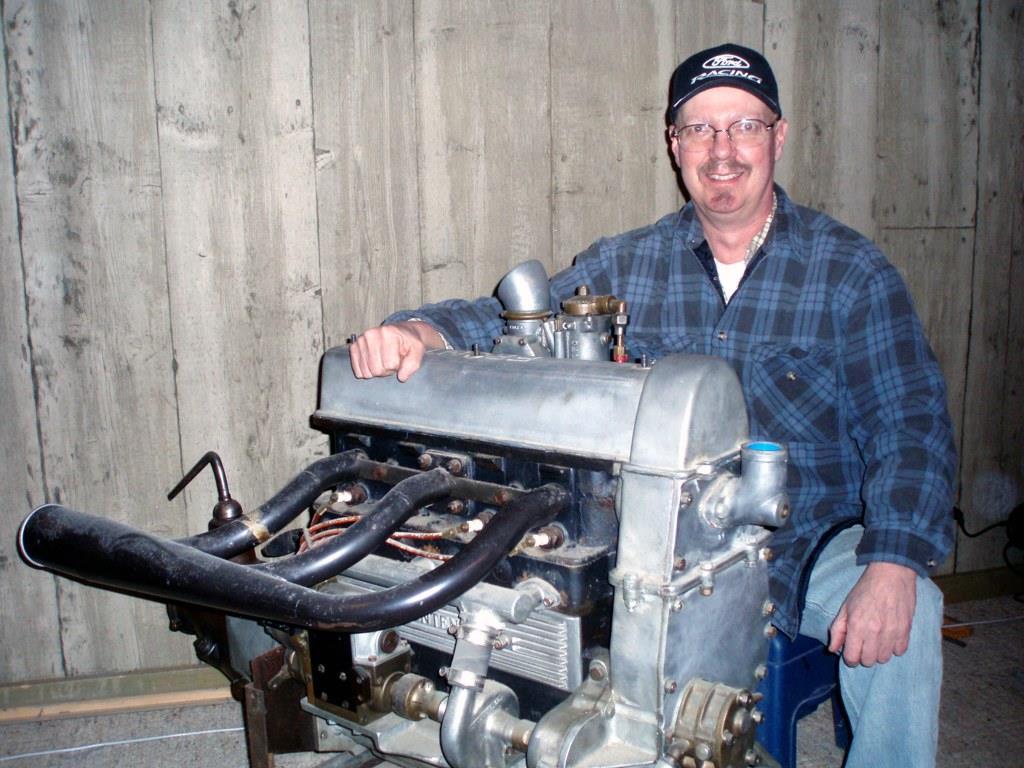 Tim Moore is from Eaton Rapids, Michigan and has been collection speed equipment and building speedsters for over thirty years. Tim has a large collection of Model T speed equipment including at least one example of each Frontenac built for the Model T Ford–the rocker arm heads and the overhead camshafts in both single and dual overhead. Of special interest is a Fronty SR head with a Green engineering, gear driven overhead cam. Tim’s collection also includes other race equipment such as side drive magneto’s and front cross drives, Frontenac pan’s, a de-stroked Frontenac crankshaft, a Laurel five main bearing crankshaft and engine block and many racing carburetors.

Tim owns a first year Mercury Body Speedster (serial #139). The car is currently unrestored but is nearly 100% complete and original. This Mercury has the factory lowering package, the optional body skirt package and the 4 step plates required with the no door model and also the optional Mercury fenders. The car will sport a full set of Spranger wire wheels in 30 x 3 1/2 and a Rajo C-35 with dual Winfield carburetors. Tim has helped many other Mercury speedster owners through his willingness to loan original Mercury parts to other owners for reproduction.

Tim also owns other Model T’s including a restored 1917 American La-France chemical truck on a Model T car chassis and the local terror from the late 1930’s–a 1926 Fronty powered roadster. He is building a copy of a local Fronty single seat and off-set dirt track racer from the 1930’s.

Tim is a frequent poster on the MTFCA forum and has helped many people with speedster building problems. He also wants to make the point that his collection would have never been possible without the patience and understanding of his wife of 26 years–Joanne Moore. 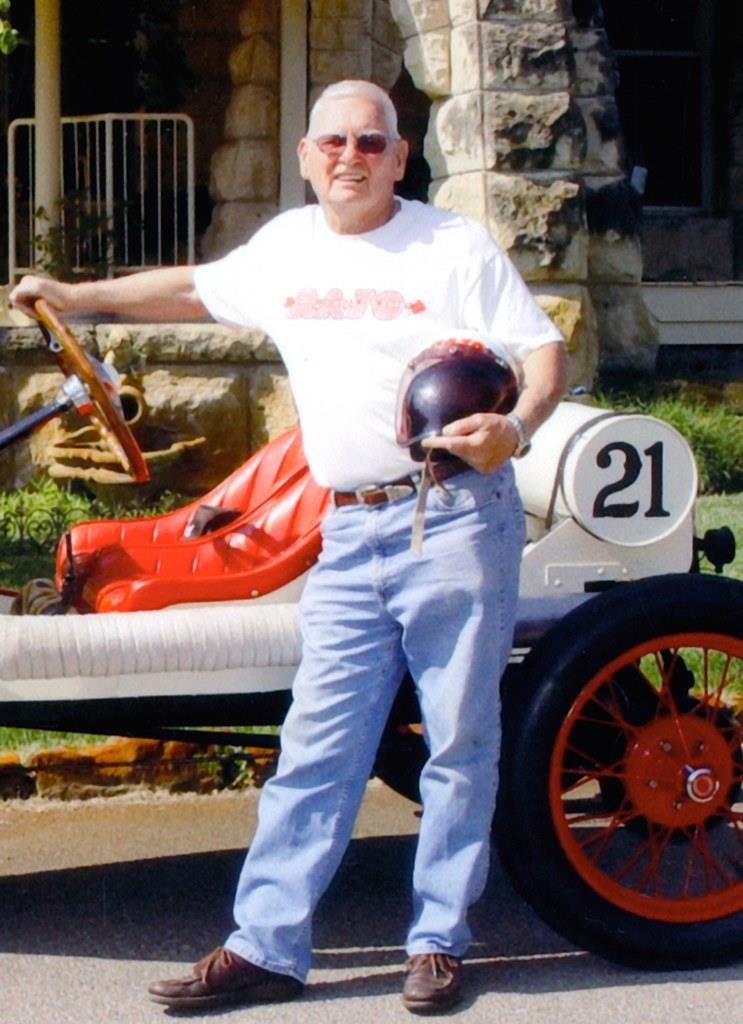 Gary LeFever lives in Wichita, Kansas. He has been building speedsters and other antique vehicles for over 30 years. Many years ago he built one of the fastest Rajo powered speedsters ever built! This white and red speedster has been a familiar sight at tours and speed events throughout the Midwest. Gary and his white speedster has won the “King of the Hill” title at the Tulsa, OK Hill Climb eight times during the event’s history.

In 2007, he had the fastest time in the Model T speedster class at the Speedster Rally IV hill climb at Evansville, Indiana. He also beat the entire Model A powered race cars for the “King of the Hill” crown!

In 2008, at the Model T 100 Year Centennial Celebration in Richmond, Indiana, his white speedster posted fastest time in the unlimited speedster class and the fastest time of the day to win the “King of The Hill” crown.

Gary is a master designer and craftsman. He has recently completed and regularly drives a unique twin engine Model T speedster that is based on a car built during the Model T Era. The engines are basically stock, mounted in line and connected at their crankshafts. Power is transmitted to the rear wheels through a stock Model T transmission and rearend. The car runs very well but is not as fast as his white Rajo speedster.

Gary never hesitates to share his “speed secrets” with others. In addition, he has completed many partial and several complete restorations of other peoples’ speedsters and regular Model Ts.

2011 RESTORATION of the YEAR 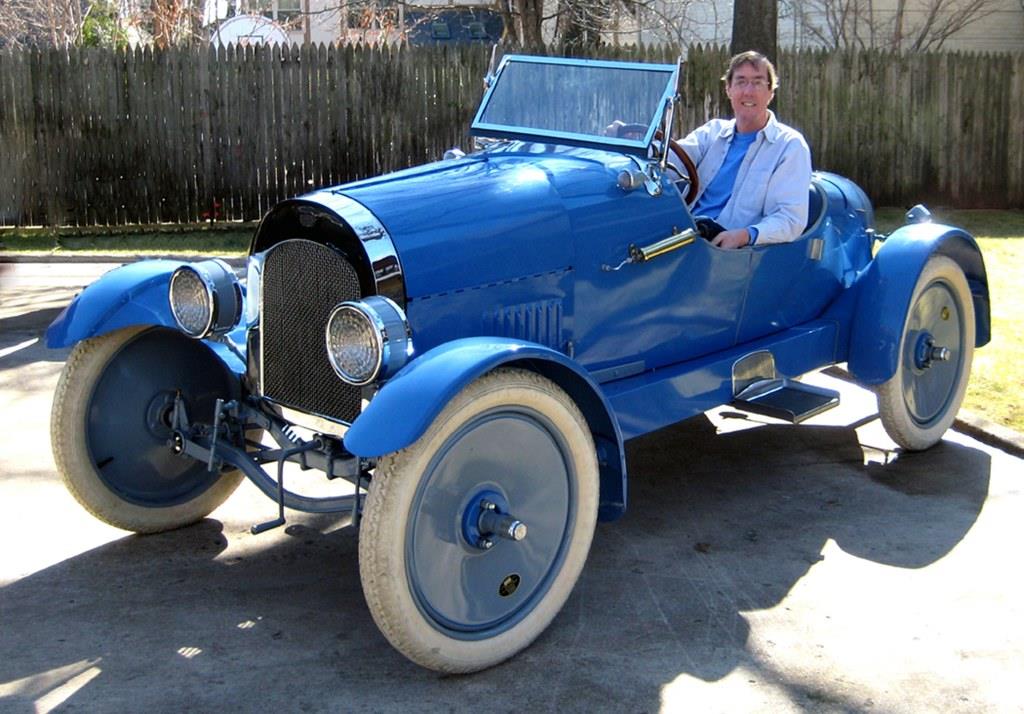 This speedster features an original ABC Racer Body built by the Automotive Body Company (ABC), Chicago, Illinois in 1922. It was equipped with the optional windshield, and folding top. When introduced in 1922, fenders and step plates were not a vailable for this body. However, in 1922 ABC did offer individual fenders and step plates for the stock Ford and 490 Chevy roadster bodies. It appears that the fenders and step plates installed on the body came from the ABC Company but were actually for the stock Ford or Chevy body. The car was originally built in1923 in California by the Ebert family on the chassis of a junked 1914 roadster pickup. The car was sold by Ebert family to Tony Oliveira in the early 1990’s. Larry bought the car from Tony in 2000. The early history of the car was covered by an article in the March, 1953 issue of Speed Mechanics magazine.

The speedster is restored close to the way it was in 1923. All the modern “updates’ that the car suffered during its life have been removed. All of the original sheet metal was used except for patches along the bottom few inches and near the front. The entire body wood substructure was intact, but most of it was not useable. Except for the main sills, the wood frame was completely rebuilt.

The car is now equipped with a 1926 engine block with a Model A crankshaft with a full pressure oil system. The engine is topped off with a RAJO Model B cylinder head and a Winfield Model M, size C carburetor. Ignition is by a Bosch front cover plate distributor. Disteel disc wheels with 30 X 31/2 white tires are used, and a Muncie auxiliary transmission has been installed into the drive train. The original “Fiat type” radiator shell, special hood, and chassis lowering brackets provided by ABC are also used.