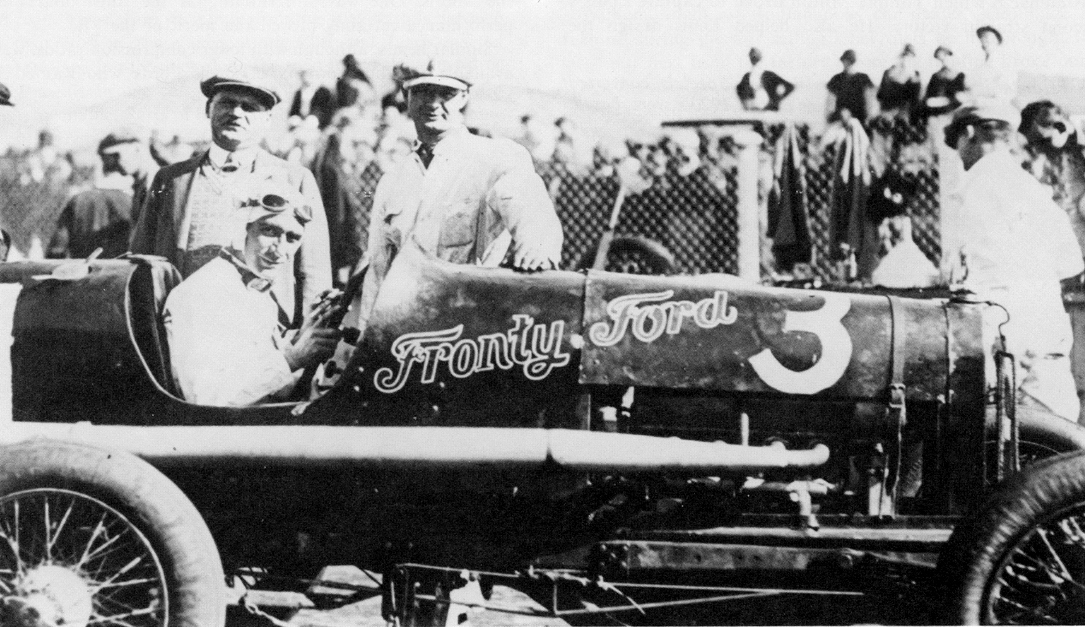 Ralph D. Ormsby was born in Markle, IN on Sept 21, 1892. By 1900, the family had moved to Fort Wayne, IN. His early life is unknown except that he was selling real estate in 1918 for the Monroe W. Fitch & Sons Company in Fort Wayne. However, he and his older brother Homer must also have been involved in auto racing because in 1921 they were hired by the Chevrolet Brothers to drive the first factory built Fronty-Fords.

Ralph’s first known win was on September 3, 1921 at Warren, IN where he won the time trials in a Model R Fronty-Ford. This may be the first win for a Fronty-Ford. On May 29, 1922, Ralph set the half-mile dirt track world record at Winchester, IN. Ralph went on to win or come in second to Homer during eight more racing dates during 1922. On June 22, 1922 at Toledo, OH, he won the 100-mile dirt track championship race.

In 1924, Ralph won numerous races during six racing dates driving a DO Fronty-Ford, including the 100-mile Mid-West Championship race at Roby, IN, and the 100 mile feature race at the Legion Ascot track in Los Angeles, CA.

Ralph’s racing career seems to have ended in 1926, since no additional written records have been found. Nothing is known about Ralph’s later life except his occupation was listed in the 1934 Fort Wayne, IN City Directory as an auto mechanic. 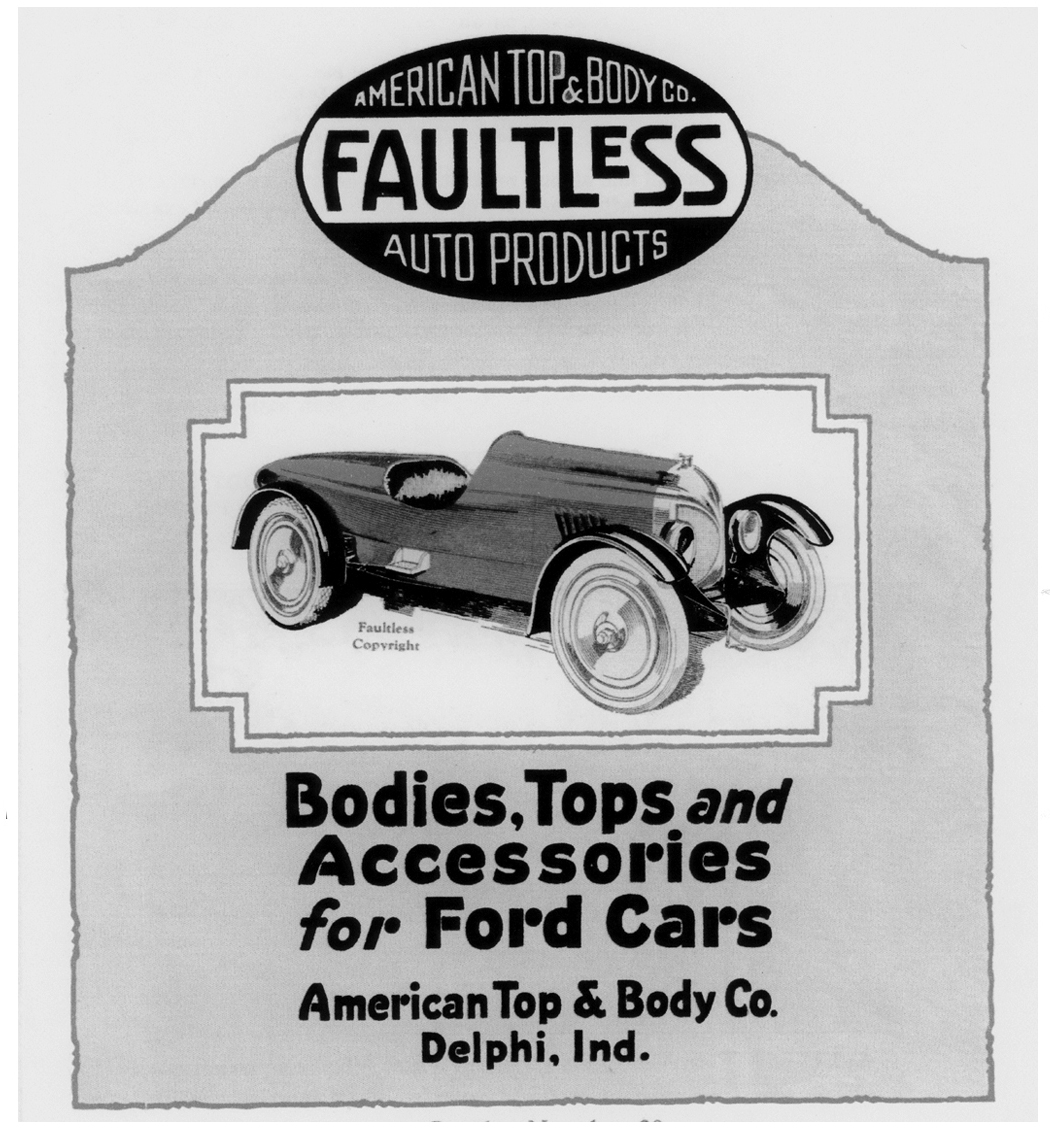 Fred Martin was born at Logansport, Indiana, May 20, 1886. Fred grew up in Logansport, graduated from high school there and attended the University of Chicago. After college he began a business career which covered an interesting diversity of experience.

In 1912, he bought the Ford dealership in downtown Delphi, Indiana. In 1917, he began operated the American Auto Top Co. upstairs above the dealership, where he manufactured accessory ‘California’ tops for the Model T. In 1920, he sold the dealership and expanded the top manufacturing business. On March 29, 1920, Mr. Martin, along with four associates, incorporated the American Top & Body Company. This corporation manufactured and sold automobile top, automobile bodies, and other kinds of automobile parts and accessories under the Faultless trade name.

The Faultless speedster body manufacturing began in 1921. By 1923, Martin was selling a complete line of equipment and parts required to build a complete speedster. There were at least four different models built, including the University Racer, the Half Mile Racer, the Raceabout, and the Purdue speedster with rumble seat. All the models were available with an optional distinctive radiator.

In 1926 Mr. Martin sold the company and it likely became a part of the Sport Bodies of America Company in Aurora, Illinois. Most of the Faultless bodies and speed equipment were then sold under the Aurora trade name. This company sold speedster bodies at least through 1930. 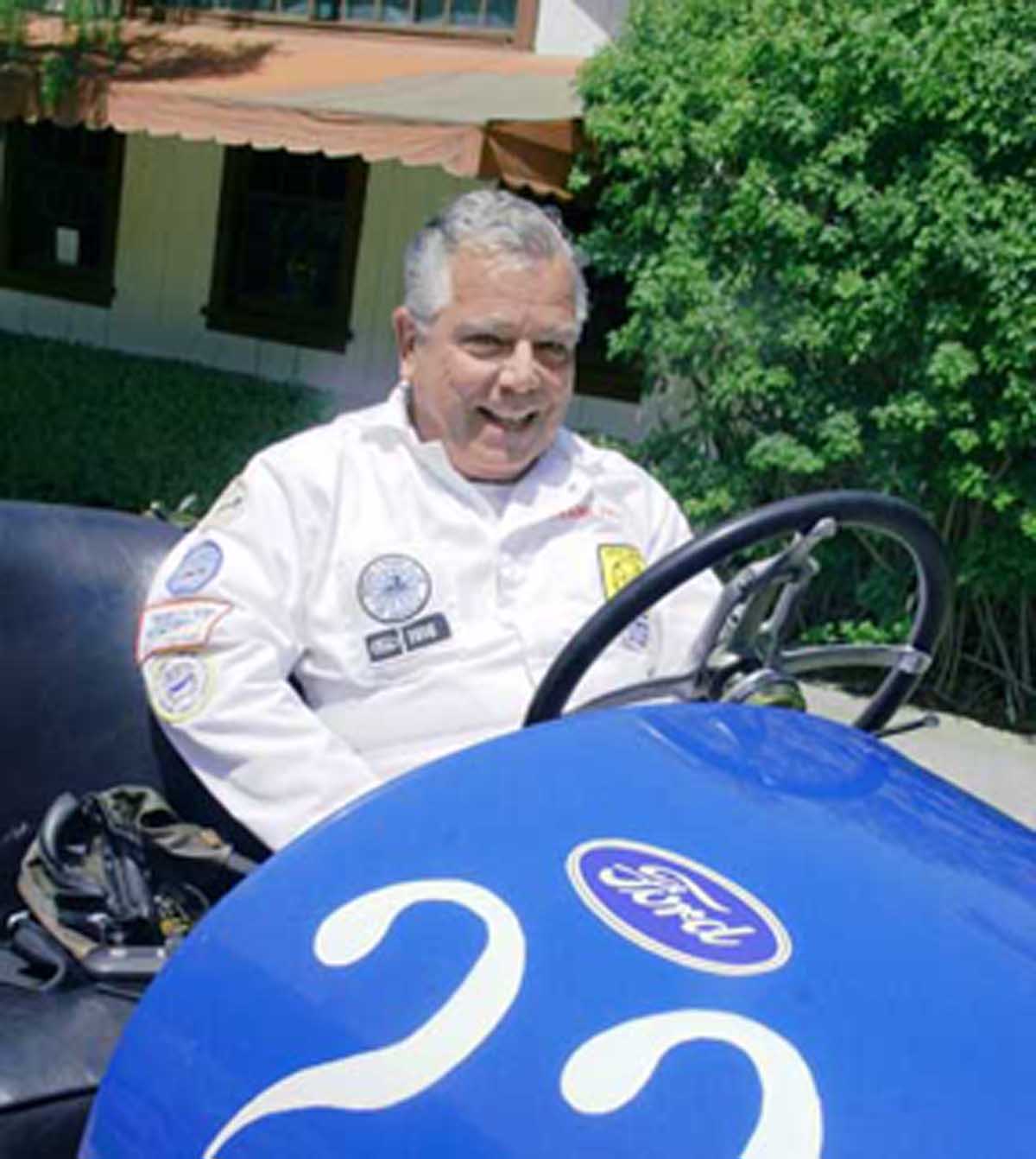 “Fast Frank” Harris was born in San Pedro, California in 1932. He has restored several brass era cars and a number of foreign sports cars. He has owned 10 Model T’s, seven of them being speedsters. He did all the work himself except for specific machining that couldn’t be done with a lathe and hand tools.

Frank and his wife Mary have attended many national and local tours since 1958 with their cars. Frank also competes in time trials, drag racing and hill climbs.

“Humble Howard” Genrich told Frank that speedster guys need names, so Frank chose “Fast Frank”. “Fast Frank’s” credo is: Life is a merry go round and you have to ride all of the horses. You even have to sit in that damned chair that doesn’t do anything, and most important of all “Ride the Lion”. 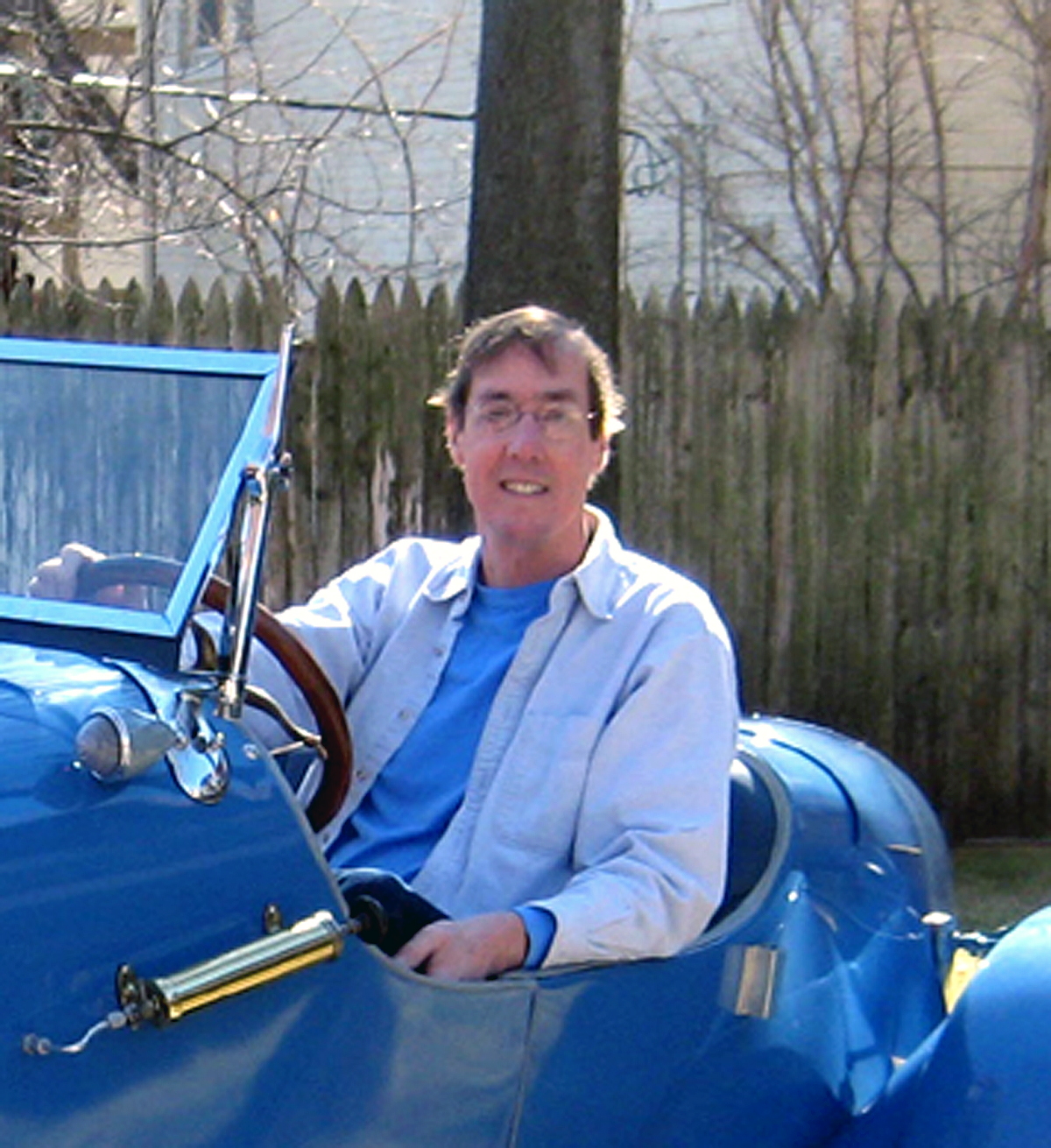 Larry Young lives in Tulsa, Oklahoma. He has restored a Tudor sedan and a very rare ABC bodied speedster that was selected as the Hall of Fame Restoration of the Year for 2011. Several years ago, Larry was involved with other enthusiasts in the development of new billet camshafts for the Model T. Originally three grinds were developed and manufactured by Specialty Motor Cams (Bill Stipe). These original grinds were well received by the Model T community. Since that time, Larry has collaborated with Steve Coniff on two very successful cams for the Montana 500. In the most recent Tulsa Hill Climb, his Tudor sedan not only won its class, but had the fastest time of all the flatheads.

With the help of George DeAngelis, he has thoroughly documented the history of cam development at his website. More recently Larry has developed a new high performance Model T flathead cam and a cam designed specifically for Model T engines with Frontenac, Rajo or Roof overhead valve heads.

Larry also has a Mercury body for which he has been gathering parts. He plans to begin its restoration in the near future.

Larry has presented seminars, developed webpages, and written magazine articles dealing with improving Model T performance. He has been the webmaster for the Model T Ford Club of Tulsa for many years and also authors his own site dealing primarily with cam design. He has helped others directly and by frequently posting information on the MTFCA forum.

2013 Restoration of the Year 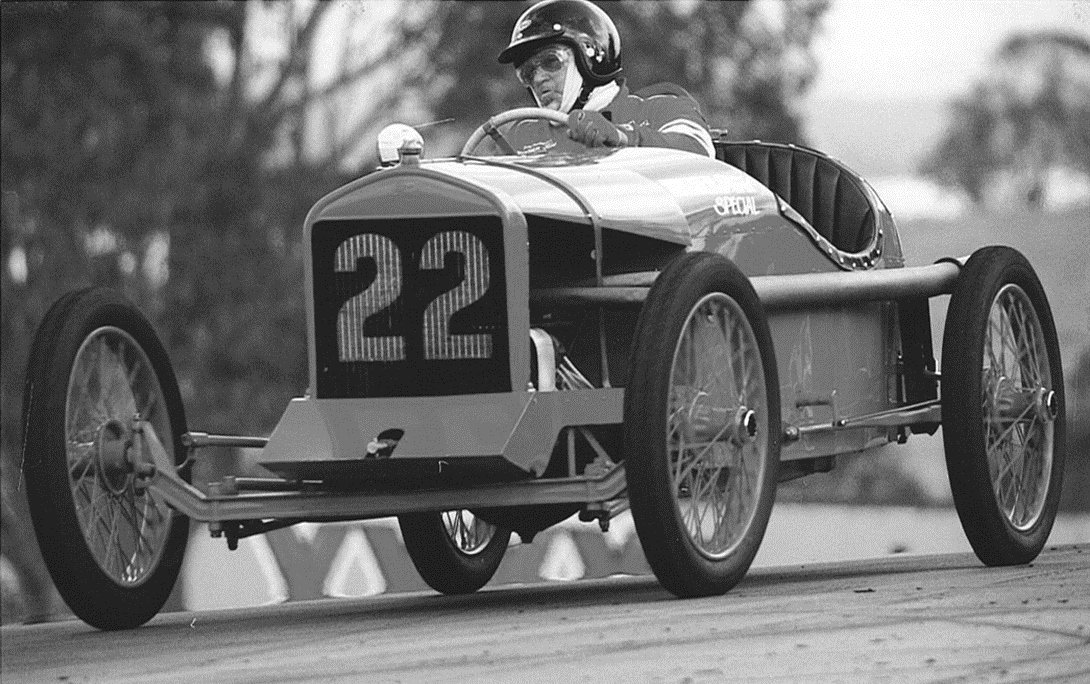 The Wikner Ford Special is recognized as the oldest known Australian built racing car. It was built in 1922 by Geoff and Roy Wikner in Leura in New South Wales (NSW), Australia. All the aftermarket components including the RAJO overhead valve cylinder head, the Buffalo centre lock wire wheels and the Mercury lowered front axle were imported and fitted by the original builders. The car is based on a 1918 Model T Ford with many of the components hand crafted by a local blacksmith.

The car is “as built”, with only 4 known owner’s, and has been owned by Doug Partington for over 55 years. It raced at the legendary tracks of Penrith, Gerringong Beach Kiama, and also at the opening of The Olympia Speedway Maroubra, NSW December 5, 1925.

The car’s early history is documented in the Wikner’s biography “The Flight of the Halifax” which includes early historic photographs. The car is mentioned in Sydney newspapers of the period. The car was actually road registered in the 1930’s

In recent years the Wikner Ford has competed at over thirty historic events in four states with total reliability.

It has been featured in several magazine articles. It was also featured in an ABC TV Landline documentary in 2004. The Wikner Ford Special is a star attraction at any historic event, its originality and patina is outstanding. It is an outstanding example of a unique Australian Special Racing Car that is an icon of the early history of Australian Motor Racing.